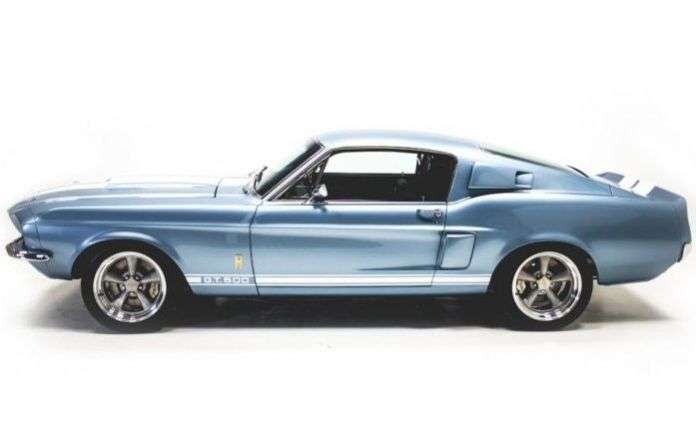 It might sound odd, but you can now buy a brand new 1967 Ford Mustang Shelby GT500 from Revology Cars in Florida, complete with a long list of standard, modern features such as a 600hp 5.0L V8 – making the new 1967 GT500 better than the original.
Advertisement

The car shown above looks like a cherry 1967 Ford Mustang Shelby GT500, but it is not. Well, technically it is, but this particular 1967 GT500 wasn’t built in the 1960s – it was built within the last year by Florida-based Revology Cars. This car is technically a recreation of the 1967 Ford Mustang Shelby GT500, crafted by Carroll Shelby and the folks at Shelby American and licensed to Revology. Revology then adds a long list of standard features from modern performance cars, creating a 2017 1967 Shelby GT500 that offers more comfort and better performance than the original 1967 GT500.

Under the hood of this modern classic is a Roush-built, all-aluminum, supercharged 5.0L that produces 600 horsepower and 475lb-ft of torque. That power is sent to the rear wheels by means of a 6-speed manual or 6-speed automatic transmission and a limited slip rear differential.

Next, the Revology 1967 Shelby Mustang features a double-wishbone front suspension setup, a three-link rear suspension package, rack and pinion power steering and four-wheel disc brakes with slotted rotors – ensuring that this newly made muscle car handles and brakes as well as it accelerates.

Finally, Revology adds a fiberglass Shelby hood and LED lighting on the outside of their 1967 GT500 while the inside benefits from modern air conditioning, power windows, power door locks, power adjustable leather front seats, and a four-speaker audio system with Bluetooth compatibility, with an optional seven-speaker sound system upgrade.

The only downside to the Revology 1967 Shelby GT500 Mustang is the price. Finding an original 1967 GT500 in showroom shape is difficult and if you find one for sale, you are going to pay big money. Finding the Revology 1967 GT500 is easy, but buyers are still going to pay big money. To be exact, the Revology Shelby GT500 with the 6-speed manual transmission starts at $219,000 and if you add the automatic transmission, the price climbs to $222,840.

Yes, that is a whole lot of money for what is technically a replica of a 1967 Ford Mustang Shelby GT500, but when you consider the cost of an authentic ’67 GT500 and the fact that the Revology car comes with more power, modern handling goodies and modern interior features – the price starting just south of a quarter-million dollars isn’t all that outrageous. In the long run, buying a rough 1967 GT500 and restoring it with all of these modern features will almost surely cost you more than $222,000.

Check out the video below for a closer look at the Revology 1967 Shelby GT500 Mustang.

LG's New EV Battery Plant Is a Welcome News for Tesla
Tesla Giga Berlin's New Hurdle: It's Not Only the Gov't, but Now Tesla Itself
END_OF_DOCUMENT_TOKEN_TO_BE_REPLACED