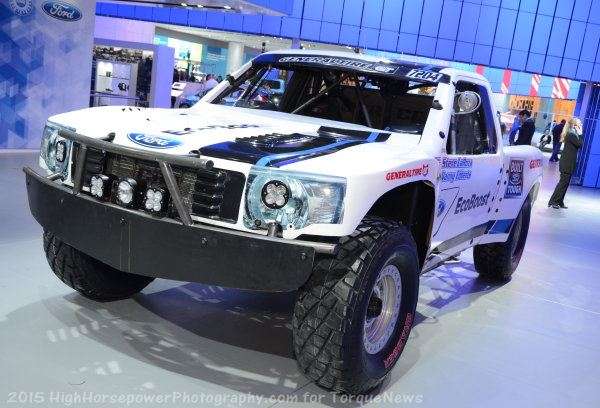 Almost a year ago, we looked at the possibility of a 2015 Ford F150 that could be the most fuel efficient half ton truck in America with the 4-cylinder EcoBoost engine from the 2015 Ford Mustang and now that we know more about both the new F150 and the new Mustang – the idea of a 4-cylinder EcoBoost SFE F150 seems even better.
Advertisement

Last year, I looked at the possibility of a new Ford F150 pickup powered by the 2.3L 4-cylinder EcoBoost that powers the 2015 Ford Mustang EcoBoost package. It seemed like a good idea to take that powerful yet efficient mill and plug it into the ultra lightweight new Ford F150 pickup, but when I wrote that first piece, we didn’t know for sure how much power the 2.3L EcoBoost would provide and we didn’t know for sure how light the new F150 would be. Well, we know now all of the key factors on both that engine and the new F150 pickup and with these official figures, I like the idea of a 4-cylinder EcoBoost F150 even more than I did a year ago.

The Ford F150 SFE 4-Cylinder
I want to start by pointing out that in no way am I saying that Ford is working on an SFE F150 with the 2.3L Mustang EcoBoost engine – I am simply pointing out what seems to me to be a very real possibility in the future. While a 4-cylinder half ton pickup seems like a questionable idea from a functionality standpoint, we should all keep in mind that the 2.3L EcoBoost engine in the 2015 Mustang has 310 horsepower and 320lb-ft of torque. That output makes the 3524 pound 2015 Mustang fastback pretty quick, but that much power is more than most of the V8 engines offered in the Ford F150 prior to 2009. For instance, the 2007 Ford F150 with the 4.6L V8 offered just 248 horsepower and 294lb-ft of torque, and Ford sold a ton of them.

Another important aspect of this idea is that the 2.3L Mustang EcoBoost engine would fit pretty well into the current F150 lineup, possibly replacing the base level, naturally aspirated 3.5L V6. This engine delivers just 282 horsepower and 253lb-ft of torque while reaching fuel economy figures of 18mpg around town, 25 on the highway and 20mpg combined. With the 2.3L EcoBoost engine getting 21 around town and 32 on the highway, some tuning efforts unique to the F150 should allow the 4-cylinder EcoBoost to be the most fuel friendly gasoline powered pickup. Really, while it wouldn’t pack the same working abilities, a new F150 with the 4-cylinder EcoBoost engine could beat the Ram 1500 EcoDiesel in fuel economy – maybe.

Weight is Key
One key factor for this idea to work could be shaving a little more weight off of the 2015 Ford F150. The lightest possible configuration is the regular cab mated to the 6.5 foot bed with rear wheel drive and the base 3.5L V6, which tips the scales at 4,050 pounds. Based on Ford’s numbers, the 5.5 foot bed is about a hundred pounds lighter than the 6.5 foot bed, so if Ford went to the smaller bed and perhaps removed a few amenities, they could very easily have an SFE package for the F150 that weighed in under 3,900lbs.

In other words, this F150 would be lighter than recent V8-powered F150 pickups that had far less power…so why couldn’t it work? Tell us what your thoughts are on this subject in the comment section below!

Billme wrote on March 27, 2015 - 1:57am Permalink
There is no ranger. We have a raptor. Why not a special econo model w turbo tuning features to let owners play around. After all it's the fun of owning and modifying a vehicle that we love.