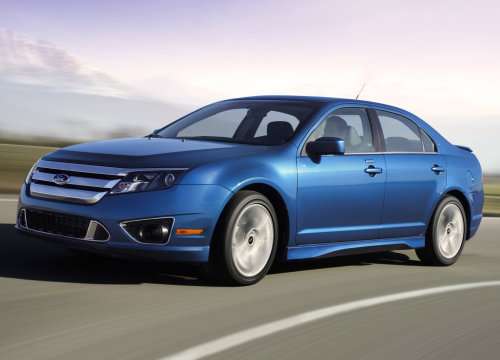 Over the past year, the 2011 Ford Fusion has been one of the bestselling cars in the US market with both standard gas and hybrid variants taking on the best of what Japan has to offer, helping Ford Motor Company to become the sales leader in the US and recently, I had a chance to spend some time in a 2011 Fusion.
Advertisement

My test subject was a 2011 Ford Fusion SE, equipped with a 2.5L 4-cylinder engine sending power to the front wheels via a 6-speed manual transmission and while I have driven and enjoyed a new 4-cylinder Fusion with an automatic transmission; the manual transmission really brings the fuel-friendly engine to life. My 2011 Fusion test car was also equipped with the rapid spec 202A which includes a power moonroof, Sync voice activated systems and an auto-adjusting rear view mirror, as well as the appearance package which adds V-rated performance tires wrapped around 18” aluminum rims, sport tuned suspension, leather items inside like the steering wheel and shift boot and a low-profile rear spoiler.

In the end, my 2011 Ford Fusion SE test car carried a price of $24,085 which includes a 3-year 36,000 mile bumper to bumper warranty and a 5-year 60,000 mile drivetrain warranty. For comparison, when I configured a similarly-equipped Toyota Camry, I got a starting price around $27,000 for a Camry XLE with the 4-cylinder engine, 6-speed manual transmission and no additional options.

As soon as I took delivery of my 2011 Fusion sedan, I was impressed by the look of the car with the appearance package. The 18” aluminum wheels and rear spoiler make more of a difference than you would expect and although the Fusion SE is only one step above base model, this sporty mid-sized sedan doesn’t have that “ready for rental” look that many modern sedans exhibit. While there is a sport package that adds improved aerodynamics and more power, the Fusion SE has more style and attitude than many of the vehicles in the segment with enough color-coded items to give it a sporty look and just enough chrome to add a touch of class – all without breaking the bank.

Inside the 2011 Fusion
When I climbed in to my 2011 Ford Fusion SE, I was surprised at how much “stuff” you get for the money. The only “regular” feature that my test car didn’t have was leather surfaces but the low-cost SE trimline includes an 8-way power driver’s seat with lumbar adjustment accompanied by a manually controlled passenger seat and a 60-40 rear bench. The rear seating area provides plenty of room for adult passengers without crushing the front riders against the dash, with the bench seats wearing a similar sporty theme as the front buckets.

The front seats of the 2011 Fusion are comfortable on a long drive but the design provides some grip during spirited romps on curvy roads. The contrasting piping adds to the sportiness of the interior with everything else from the carpeting to the headliner finished in Charcoal Black and with similar styling in the rear, the black-on-black interior is simple yet bold. My biggest complaint with the interior (and this is a pretty minor complaint) is that when you put two large cups in the center console cup holders they can get in the way of the manual shifter.

The interior of my Fusion wasn’t packed full of high tech gadgets (although the attractive touch screen is available on higher trimlines) but from the driver’s seat, the stereo and HVAC controls were all easily in reach and the Fusion really makes the most of the standard options. The basic stereo system was impressive with simple navigation of the satellite radio channels and while I’m a fan of the pricier touchscreen infotainment system, the standard sound system was more than enough for the average new car buyer. In short, my $24,000 Fusion didn’t impress with expensive add-ons but it did impress by making the most of the simple standard features…offering comfort for all passengers with all of the conveniences that make the difference in the mid-sized sedan segment.

One of the key concerns with many new car buyers is interior noise and, like all new Ford products, the 2011 Fusion has gone through extensive R&D to cut down on the level of noise inside the car. Even on rougher roads, there was minimal “road noise” transferred into the interior and the Fusion was whisper-quiet on high speed on the highways. Also, unless you were climbing into the higher RPMs there is very little engine noise resonating into the car but when you are banging through the gears, the 2.5L 4-cylinder makes itself known – but no more than any other car in the segment.

The interior and exterior of the 2011 Ford Fusion SE offers great looks and an impressive level of interior comfort for such a low price. Unlike many vehicles in the class that either offer you a low price OR a nice interior with the good old “plastic rental car feel” in typical mid-sized sedan being a thing of the past.

Click here for part two of my 2011 Ford Fusion SE review, covering the drive of one of America’s bestselling mid-sized sedans.