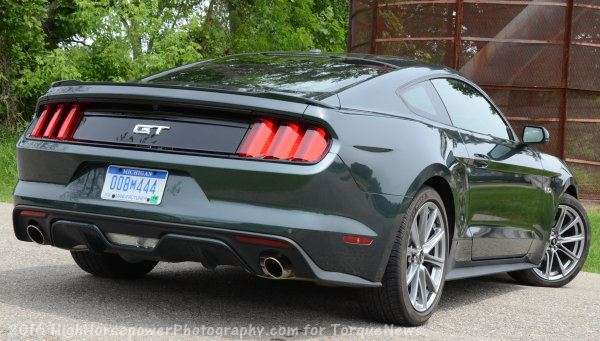 Refreshed Ford Mustang Might Get a New Face and Tail

The Ford Mustang is rumored to be set for a surprising facelift in the next two years and based on what I have seen in person and what is available via spy shots, I believe that the 2018 or 2019 Mustang might have a lightly restyled front end and a significantly restyled rear end.
Advertisement

Living in Metro Detroit, I’ve seen camouflaged Ford Mustang test cars in area traffic, but I have never seen them in a situation where I could stop what I was doing to get pictures. Fortunately, some spy shots have hit the internet showing some of these mysterious Mustang test cars, giving me a chance to really look the car over closely. Based on what I have seen in person and what I can see in the spy shots (which we don’t have permission to use), I believe that the refreshed Ford Mustang could get a new front and rear end with different sculpting than the current models.

Of course, this speculation is based on the test cars, which could have padding or other filler to give the test cars a unique look, but under the black and white camo – it certainly appears as though the next Ford Mustang has a new tail end and possibly a new front end.

The New Ford Mustang Test Cars
The most notable feature of the Ford Mustang test cars I have seen around town is the rear end. The image above shows the current Mustang GT, which has a clear indentation between the taillights and below the molded rear trunk lid spoiler. The tail lights sit higher than the area between them and that black panel – with the GT badge in the middle – sits much further into the body than the rear lip of the trunk lid. On the other hand, the Mustang test cars around town don’t have this deep drop below the edge of the trunk.

Next, even with the checkered camo, it appears as though the area around the license plate of the Ford Mustang test car is different. The current Mustang (above) has an area for the license plate which kind of melts away on the sides and bottom, but the test cars appear to have more of a box-shaped indentation for the plate.

Based on these two differences, it looks like the next Ford Mustang could have a much smoother back end, with less variations in sculpting around the taillights and the license plate. This smoother tail could lead to improved aerodynamics, thus better performance and better fuel economy.

Finally, the front end of the Ford Mustang test cars don’t show much, since there is heavy camouflage covering the entire face of the car, but the fact that the company went to such great lengths to hide the front leads me to believe that there are some changes there. The headlights and grille appear to be the same, but it appears as though the lower portion of the front fascia might extend out away from the car further.

I should point out once more that with my speculation being based on camoflaged test cars, I could be wrong about these possible changes, but based on the shape of the rear end, that aspect certainly appears to be different.

For those who haven’t seen the spy shots of the new Mustang, you can check them out on Autoblog.

Amay wrote on September 29, 2016 - 11:02am Permalink
Show me all the updates related to cars....
April wrote on October 4, 2016 - 12:22am Permalink
It will look really nice if they do change the front end alot. Everyone says it looks like a fusion. And that's from my freinds who own one. Lol hopefully they will add a bit if horsepower to catch up to camaro.