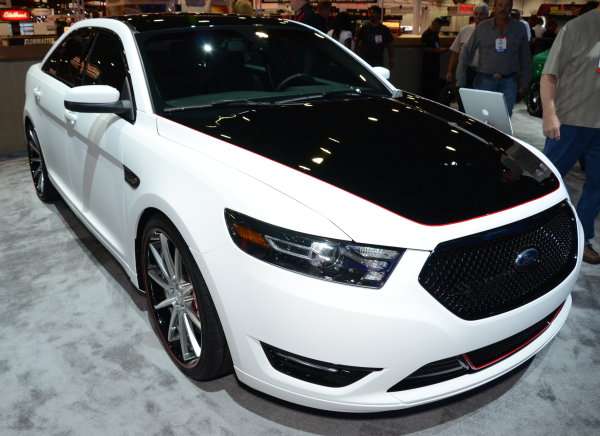 The Raptor F150 Should Lead to a New Taurus SHO

The 2017 Ford F150 SVT Raptor will feature by a new, high performance version of the 3.5L EcoBoost V6 which is expected to yield somewhere in the area of 450 horsepower and once this new, beefier version of the long-popular EcoBoost V6 has hit the streets in the new SVT pickup – the Ford Taurus SHO should be the next in line to get a higher output twin turbo V6.
Advertisement

The 2017 Ford F150 Raptor will almost surely be the greatest performance truck ever offered up from the Blue Oval, with a new 10-speed automatic transmission, a new four wheel drive system and – most importantly – a new version of the 3.5L EcoBoost V6 that is expected to deliver somewhere in the area of 450 horsepower. Not only will that make the 2017 Raptor the most powerful factory stock F150 of all time, but it will also be one of the most powerful half ton trucks on the market.

In short, this specially tuned EcoBoost will help the Raptor shine in much the same way that the “normal” 3.5L EcoBoost V6 has helped F150 monthly sales climb well over the 70k mark over the past few years, with this new engine being the most powerful example of EcoBoost technology thus far.

We know that this engine is going to make the 2017 F150 Raptor a real beast, but the new SVT pickup isn’t the only vehicle in the lineup that features the 3.5L EcoBoost – nor is it the only vehicle in the lineup that could benefit from having a big injection of added power. The Ford Taurus SHO – the vehicle that essentially introduced us to the high performance EcoBoost engine – hasn’t gotten any significant changes in years now, but applying even some of the technology from the new Raptor could allow the Taurus SHO to better compete with the other large performance sedans sold in America.

The Modern Taurus SHO
The Ford Taurus SHO as we know it was introduced for the 2010 model year and when it was introduced, it was a bit of a game changer. While the SHO name had long been recognized in the world of go-fast sedans, the 2010 Taurus SHO made a big leap in performance from the previous generation – dumping the awful V8 from the previous generation in favor of a then-new EcoBoost V6, raising the power levels from 235hp in 1999 to 365hp and 2010. Also, Ford add all-wheel drive for the best possible traction in any setting, allowing this performance sedan to serve as a great year-round daily driver.

Keep in mind that when the Ford Taurus SHO was rolled out for the 2010 model year, the closest competitor was the Dodge Charger, which came with an AWD R/T package offering 368 horsepower or the SRT8 package (RWD only) with 425hp. The SHO was only slightly less powerful than the second most powerful Dodge Charger back then, but things have changed a great deal since 2010.

The Dodge Charger R/T still offers “only” 370 horsepower, but the Charger Scat Pack offers 485 horsepower while the Charger Hellcat offers a whopping 707 horsepower. As a result, the current Taurus SHO is only more powerful than the base model Charger with the 3.6L V6 so in the grand scheme of high performance sedans – the SHO has gotten buried in the crowd.

A Raptor-Powered Taurus SHO
I should start by pointing out that I don’t expect anything to happen with the new Raptor EcoBoost engine until well after the new high performance F150 has been in dealerships for some time. However, now that Ford has designed this 450hp EcoBoost V6, I have a hard time believing that they won’t use it elsewhere and no other vehicle in the company lineup seems more in need than the Taurus SHO.

I don’t expect Ford to literally transplant the Raptor engine into the Taurus, but if the SVT team can get 450hp out of the 3.5L EcoBoost in the Raptor, some of that technology could most certainly be used in the next generation SHO. Even if the Taurus “only” got a bump up to 425 horsepower, the fact that it has all-wheel drive would allow it to compete with the more powerful Dodge Charger and the other go-fast sedans sold in the US.

Also, since the new Raptor comes with a four wheel drive setup that the company has called their most advanced ever, there is a chance that some variation of that new 4WD setup could be transferred to the all-wheel drive setup in the future SHO – making for an even faster and more efficient sport sedan.

Unfortunately, this is all speculation right now, but there is no denying that the Taurus SHO needs to be brought up to speed - and the Raptor's EcoBoost V6 could do that in a big way.

Dave wrote on October 15, 2015 - 12:48pm Permalink
The current Taurus SHO, and the Flex, with the 3.5l ecoboost are electronically limited to 365hp because that is all the current drivetrain (transmission) will handle. They will have to make significant upgrades to the drivetrain if any additional hp is to be applied.
R. A. Shoman wrote on April 20, 2016 - 12:29pm Permalink
Your comment is not exactly correct!? Yes it is electrically limit (the engine) but the drive train will handle pass 510hp up to 617awhp. I have 98,000 mile on my 2011SHO, 12.3sec(1\4mi), 405awhp\510hp @ eng (see shoman04 on YouTube) And Mike of Detroit has put down 617awhp w/ Livernios HO Ecoboost V6. The Tran would easy handle 450 HP . Livernios in-a-can tune is already 440hp now with 1000's of SHO & Flex's running it. Ford only build 4-5000 SHO a year. And there are at least three other tune in it same power range.
Eric S wrote on August 21, 2016 - 9:20pm Permalink
Yea just to let you know your wrong about the drive train- the tune is very conservative. Just a CIA and a tune from livernois you can easily push close to 425 and put all the miles you want on it...it's a great car and guys are gettin close to 600 AWHP on stock drivetrain with not all that much work. You should do some research on it before you write about it. It's not even like it's that big of a secret- a little googling goes a long way