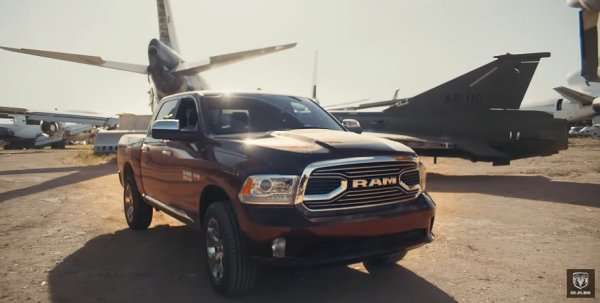 The Ram Truck brand will introduce their new commercial titled “Airplane Rescue” this Saturday during the television coverage of the 2017 Preakness Stakes, paying tribute to the US Armed Forces in a 30-second spot which features an 89-year old World War II veteran and a historic Navy fighter plane.
Advertisement

Some truck commercials focus on power levels, towing capabilities and whether or not you can poke a hole in the bed with your tool box while others don’t really talk about the trucks at all. The newest 30-second commercial from the Ram Trucks brand falls into that second category, as “Airplane Rescue” doesn’t talk about the trucks at all – but it does tell a compelling story.

Ram Trucks Airplane Rescue
The new Ram Trucks commercial titled “Airplane Rescue” features a father and son duo cruising through an airplane graveyard in a new Ram 1500. After driving part rows of ancient aircraft, they stop and dust off a particular plane and then we see them towing it out of the yard. The storyline explains that the father flew this very plane in World War II and the two of them have purchased it to restore to its original glory.

The veteran watches in wonder at the end of the video as the Grumman F6F Hellcat Navy Fighter soars through the air in its beautifully restored condition.

As part of the new Long Live campaign, the only narration in this commercial is “Long Live honor and Long Live the truck that salutes those who built this country.”

A Real Veteran and an Original Navy Fighter
While the father and son in the Ram Airplane Rescue commercial are actors playing roles, the father in the commercial is an actual World War II veteran. His name is Art Frankel and he is 89 years old residing in California. Mr. Frankel enlisted in the Army Air Corps at 18 and he became a topographical drafter, creating maps of the various areas during his missions in World War II. After the war, Frankel worked as a school teacher until 55, at which point he became an actor.

The commercial was filmed at the airplane boneyard at the Mojave Air and Space Port in California and the plane featured at the end of the video is one of the five remaining Grumman F6F Hellcat Navy Fighter planes which can still fly – which was on loan for this commercial from the WWII Aviation Museum at Camarillo Airport in Camarillo, California.

The broadcast of the Preakness Stakes is likely to draw a big crowd, as Kentucky Derby winner Always Dreaming will look to take the next step towards being the next Triple Crowd winner. He is the odds-on favorite to win, but Classic Empire is a close second in the betting and millions of people will be watching – so plenty of people will get tocatch this commercial during the big race.