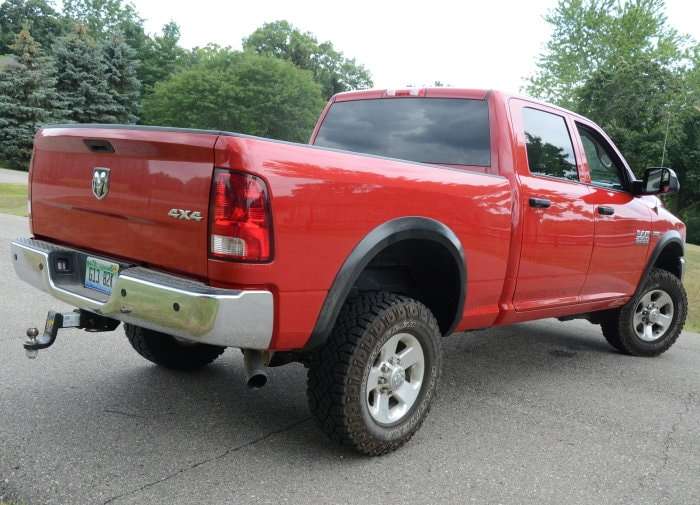 FCA is recalling roughly 1.15-million Ram trucks in the United States over a concern that the tailgate could unexpectedly pop open when the vehicle is in motion – potentially creating hazardous conditions for other drivers if cargo begins falling out of the bed at speed.
Advertisement

Back in May, FCA began looking into a series of customer complaints about the tailgates on some 2015, 2016 and 2017 Ram trucks popping open while on the road. After looking through dealership data, it was discovered that more than 5,600 repair orders had been filed with this issue, so the engineers dug in and discovered the issue – and issue that has led to a recall of nearly 1.2-million trucks in the US alone.

Problem and Solution
The issue causing the tailgates on these 2015-2017 Ram trucks is fairly technical, but in short, part of the electronic locking mechanism may allow another part to move further than intended when the truck hits a bump. When that happens, the lock rods that keep the tailgate latched and closed can move, allowing the tailgate to open.

The fix sounds fairly simple, as the dealership will install new parts that prevent that unintended travel, keeping the locking rods in place and keeping the tailgate shut when in motion.

The Risks
In all reality, there is little risk to having the tailgate of your truck drop open while you are driving. It is going to make a sudden, loud noise, but unless you are so startled that you swerve into oncoming traffic or something ridiculous like that – it isn’t going to hurt your truck. However, if you have cargo in the bed that is not secured, having the tailgate open could let some of those items tumble out of the back of the truck when you hit bumps. That poses a safety risk to the people behind the truck and that makes it a safety hazard – hence the recall.

In the long run, this is really more of a nuisance recall, as no truck owner wants their tailgates slamming open on the highway, especially if they are hauling items in the bed.

Affected Vehicles
This recall (U74) pertains to all 2015, 2016 and 2017 Ram 1500, 2500 and 3500 trucks with power locks and without the 8-foot bed. Both of the shorter bed options are included, but those trucks with the biggest bed or without the power locking tailgate are excluded from the recall.

Even with those exclusions, this recall still impacts about 1.15-million Ram truck owners in the United States, about 250,000 in Canada, around 20,000 in Mexico and roughly 25,000 outside of NAFTA regions.

The recall is expected to begin on September 14th, 2018, but Ram owners can be safe by either not keeping a bunch of clutter in their beds, or by securing that clutter. Those truck owners who use their Rams for work will want to take measures to secure their cargo, just in case the tailgate falls open at speed. No contractor wants to watch a bunch of expensive tools tumbling behind the truck on the highway any more than the rest of us want to be swerving around those tools at speed.

LG's New EV Battery Plant Is a Welcome News for Tesla
Tesla Giga Berlin's New Hurdle: It's Not Only the Gov't, but Now Tesla Itself
END_OF_DOCUMENT_TOKEN_TO_BE_REPLACED