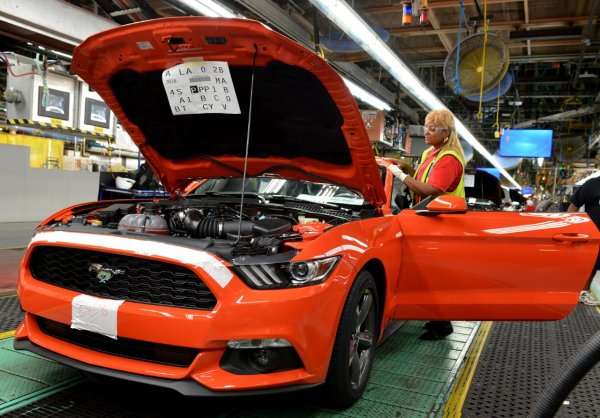 Production of the 2015 Ford Mustang is Finally, Officially Underway

After much speculation as to when the 2015 Ford Mustang fastback and convertible would begin rolling off of the Flat Rock Assembly line, Ford Motor Company announced this morning that today is officially the start of production for the next generation pony car – meaning that the first 2015 Mustangs intended for public sale will be completed by day’s end.
Advertisement

Ford has made it very clear early on that the first examples of the all-new 2015 Mustang would reach new owners and dealerships sometime in the fall of 2014…at least for the US market. That caused many people to speculate as to when production would actually begin and while Ford has been pretty up front about announcing key points on the new Mustang along the way, the company has been surprisingly quiet about the start of production. Without any official word from Ford, there have been a handful of unsubstantiated rumors over the past two months that “tomorrow would be the day” – and all of those days came and went without any news of the 2015 Mustang entering the production stage.

Well, Ford has finally ended that guessing game, announcing this morning that production for the 2015 Mustang officially began at their Flat Rock Assembly Plant just south of Detroit.

Only Quality Control Stands Between the 2015 Mustang and New Owners
Now that production of the 2015 Ford Mustang has officially begun, we can fully expect that the first completed units that are intended for sale to Joe Public will be built and ready to drive by the end of the day. However, we can still expect a short period of time before the automaker starts shipping new Mustangs to dealerships and the new owners. With this being the first batch of next generation Mustangs, I would expect an intensive and somewhat lengthy (at least lengthier than usual) quality control process that will help the Motor Company insure that there are no problems with these first production units.

This first collection of 2015 Ford Mustang fastbacks and convertibles will likely be closely examined by a team of workers who will do their best to hunt down any problems that may have occurred during production. All vehicles face a post-production quality control step before heading out to dealerships, but a car as important as the next generation Mustang will almost certainly have a quality control phase that is more rigorous than many other new vehicles launching this year. Once that quality control check has been completed – hopefully without finding any issues – the first units will be loaded onto trucks and shipped to dealerships and new owners around the country.

First the United States…Then the World
After the Ford Motor Company quality control team has given the first batch of 2015 Ford Mustang units the thumbs up, they will be loaded onto trucks and probably some trains – and shipped out to dealerships around the country. Ford plans to begin delivering the first units “this fall” for dealerships and owners around the United States while prospective buyers and Ford dealerships in over 120 countries outside of the US will have to wait until a currently unspecified date sometime during the 2015 calendar year.

“Mustang is and will continue to be an automotive icon,” said Joe Hinrichs, Ford president of The Americas. “Expanding its availability globally affords our customers around the world the opportunity to have a true firsthand Mustang experience – one unlike any other.”

While most American Mustang fans couldn’t care any less about the global spread of new car sales, the entire auto industry is becoming more of a global game than ever before and for the Motor Company – selling the mighty Mustang overseas is a big deal. The Mustang has been well known around the world for decades, but the 2015 models are the first that are designed with a global marketing effort in mind. While Ford hopes to see the 2015 Mustang help reclaim the title of America’s bestselling sports car, the introduction of the S550 Mustang around the world could help the Mustang become the bestselling muscle car in the world – even if the Camaro continues to lead the US market.

Brett Stark wrote on August 30, 2014 - 10:16am Permalink
I am familiar with the Ford and Lincoln pre-production processes and thought I might shed some light on the production release process. The start of production is termed MP1 (mass production one, or Job 1). At MP1, the suppliers fill the supply chain with parts and the first few hundred vehicles are built. Once those are completed, production stops for a bit. While those vehicles are tested and inspected prior to the senior management review. The senior management review at MP1 is termed the OKTB event, or OK To Buy. The next production event is termed MP2 (Mass Production 2, or Job 2). The vehicle must receive OKTB before MP2 can commence. MP2 is usually scheduled 1 month after MP1. I have seen MP2 delayed in the past due to production issues that needed to be resolved prior to receiving OKTB. Once the vehicle receives OKTB status, the vehicles are released for delivery to dealers. There are many other pre-production events prior to MP1, (such as FPJ, TT, and PP builds), but the MP1, and by extension MP2 builds, are the most important to the buying public. I hope this helps people understand some of the steps Ford takes to control the release of new vehicles to dealers, and explains the delay you sometimes see between "start of production" and actually seeing vehicles at the dealers.
Patrick Rall wrote on September 2, 2014 - 10:44am Permalink
Great information, Brett. Thank you very much for sharing!