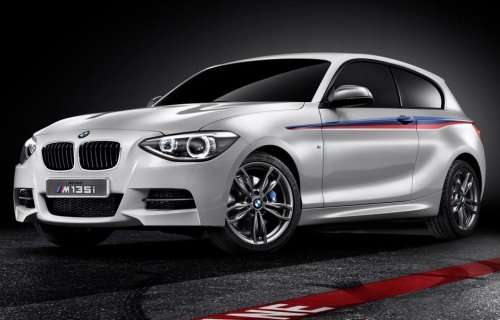 A preview of the BMW M135i coming to Geneva

This morning, BMW dished the details on the new M135i Concept – a high performance 3-door variant of the new BMW 1 Series hatchback that will debut next month at the 2012 Geneva Motor Show.
Advertisement

The BMW M135i Concept takes a unique new 3-door 1 Series form, fitting it up with interior, exterior and performance goodies to transform the fresh new design into a super sporty looking hot hatch. The soul of the BMW M135i Concept is a 3.0L Twin Power Turbo inline six, pumping out “more than 300 horsepower”, although exact power has not been stated. Considering that the 3.0L engine in the standard BMW 135i offers 300hp and 300lb-ft of torque, we would expect that a production version of the M135i would offer similar power to the current 1 Series M Coupe which packs 335hp and 332lb-ft of torque. There are also no details on the transmission in the BMW M135i, but with any luck there will be a standard manual transmission in addition to a dual clutch option.

In addition to the M-tuned turbocharged engine, the BMW M135i Concept features a suspension system designed by the M engineers for optimal performance, including an enhanced braking system and lightweight rims wrapped in high performance tires. All of these features sound like they are all very ‘production ready’ so while this car is slated as a concept at the 2012 Geneva Motor Show – it sounds like this new hot hatch could slide right into the production lineup with few changes.

On the outside, the BMW M135i Concept features a body kit that shares the look of the other M models with an aggressive front fascia sporting large air intakes to feed the high performance engine. Out back, a unique lower fascia has a contrasting panel enclosing the polished dual exhaust ports. Finally, the exterior of the M135i Concept features the tri-color BMW M division stripe running down the side of the car with a brief look at the blue, purple and red on the rear hatch.

When the new BMW 1 Series made its debut, we were privy to only the 4 and 5 door variants but BMW will use the high performance M135i Concept to gauge the reaction to this new 3-door variant. As great as it looks in pictures, we fully expect that there will be a 3-door version of the BMW 1 Series in the near future – hopefully including the high performance M135i. The elongated doors of this new 3-door 1 Series accentuate the performance feel of this sleek concept with a modern shape that seems to pay homage to the BMW M Coupe of the late 1990s.

We have known since the BMW 1 Series M Coupe hit the streets that it would be a one-year special edition vehicle but while many assumed that the replacement would be a new high performance coupe as part of the new BMW 2 Series, perhaps the BMW M135i Concept could be a look at the next “entry level” M performance model.

Check out the gallery on the right for a closer look at the new BMW M135i that will make its debut next month at the Geneva Motor Show.

Toyota's First EV Will Have a Name of BZ: Toyota BZ
First Videos From Inside The Boring Company's Las Vegas Loop
END_OF_DOCUMENT_TOKEN_TO_BE_REPLACED