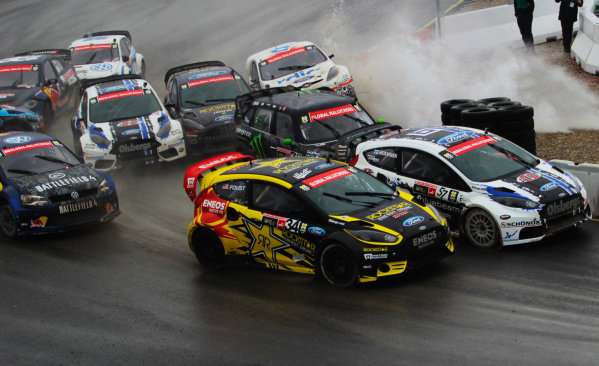 The X Games organizers have announced their list of drivers invited to the Austin Global RallyCross race and along with a bunch of the biggest names in the sport like Ken Block, Tanner Foust and Travis Pastrana, the Austin X Games will see the first two female drivers to compete in the world of GRC.
Advertisement

The preliminary list of rallycross drivers who will race at the 2014 Global RallyCross race at the Austin X Games includes 19 names – many of which we know well along with some newcomers to the world of GRC. For many of the drivers, we know what kind of car they will be piloting when they hit the track in Texas while others require a bit of speculation. We break down the field below.

First off, we have nine drivers destined for the Austin X Games who have set rides for the 2014 Global RallyCross schedule. Those drivers who are definitely piloting Ford Fiesta ST rallycars include Steve Arpin, Ken Block, Brian Deegan and Patrik Sandell. In their new Volkswagen Beetle Rallycars will be former Ford drivers Tanner Foust and Scott Speed while Subaru will likely have a contingent as large as Ford’s with Sverre Isachsen, Bucky Lasek, Travis Pastrana and Dave Mirra racing in Impreza WRX STI rallycars. Dave Mirra is somewhat of a question mark considering that he finished the 2013 season in a Mini Cooper that is normally driven by Liam Doran, but Mirra’s personal website still lists Subaru as a major sponsor.

Next up is a group of drivers who are question marks in terms of what they will be driving at the Austin X Games GRC event, but based on their teams last year we can make some guesses as to what to expect. Rhys Millen will be competing and while he has spent the past few seasons in a Hyundai Veloster rally car, Hyundai pulled backing of North American motorsports prior to the 2013 GRC season. Millen still ran a Hyundai in a few 2013 GRC events, but I have to wonder if he might not have a stronger corporate sponsor for 2014. Pat Moro debuted the Chevrolet Sonic Rallycar late in the 2013 season so I expect to see Moro back in the Chevy to start 2014. Nelson Piquet Jr and Guiga Spinelli both raced Mitsubishi Lancer Evolutioin rallycars during the 2013 season so I expect to see both of those guys back in Mitsubishi cars for 2014.

Finally, we have a group of drivers who were invited to race in Austin, but we don’t have any real idea as to what they might be driving. Bryce Menzies had a very unsuccessful 2013 campaign in one of the Travis Pastrana Racing Dodge Dart rally cars, but with Dodge out of the GRC and Travis jumping back to Subaru, I would expect Menzies to still be running with Pastrana in a Subaru. However, Bryce could be teaming up with some of the other drivers who don’t have a second driver on the team like Pat Moro or Rhys Millen. There is also Austin Dyne and Joni Wiman – both of whom competed in the 2013 GRC Lites series in a Ford GRC Lite car, but since every driver in GRC Lites runs a Ford it is hard to say if they will stay with Ford in the GRC Supercars series. Considering how many drivers Ford lost (Heikkinen, Foust, Speed) during the offseason, I expect to see at least one of the GRC Lites guys – if not both – to run Fords in Austin.

Last but most certainly not least we have the first two female drivers who will ever race in the world of Global RallyCross. From the world of drifting comes Sarah Burgess, who has spent the past few seasons drifting in a Ford Mustang so I would expect that she will race in a Ford Fiesta. From the world of New Zealand Rally Racing comes Emma Gilmour, who races “down under” in a Suzuki Swift Sport. Considering Suzuki’s lack of presence in the US, I would be surprised to see Gilmour in a Suzuki and her having spent time in Subaru race cars in the past – I would guess that Gilmour might be yet another Subaru team driver.

Below is a list of the 19 drivers invited by the X Games management to run in the Austin Global RallyCross event along with the brand of vehicle that I expect them to drive in Texas.

TorqueNews will be covering the world of Global RallyCross all season so you can expect to find a full complement of information on the GRC throughout the 2014 season.