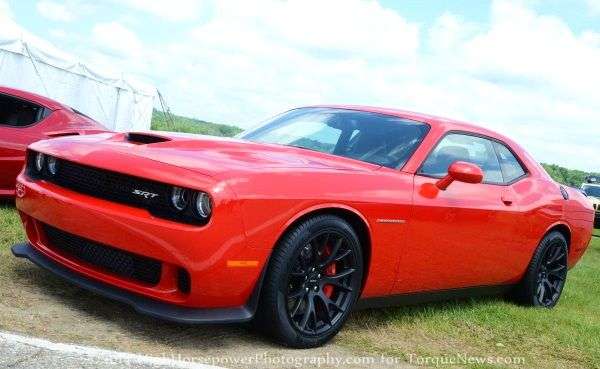 The announcement that the 2015 Dodge Challenger SRT Hellcat will pack 707 horsepower and 650lb-ft of torque has rocked the automotive world, but the discussion has quickly shifted to just how much the most powerful muscle car of all time will cost – and there is a good chance that many muscle car loyalists will be unhappy with the sticker price of this Mopar monster.
Advertisement

The Hellcat Hemi Challenger will pack 707 horsepower, making it the 6th most powerful car in the world while ranking a stunning third in the world in terms of torque rating. The Challenger will offer power comparable to million dollar supercars and because of that, we can expect a price that is just as shocking to some as the power ratings. Mind you, the Challenger Hellcat wont cost anywhere near a million dollars – or anywhere near as much as the other production models that offer around 700 horsepower – but it will still cost way more than any other non-Viper or non-Ram that the Dodge brand has ever sold.

How To Estimate the Challenger SRT Hellcat Price
When trying to figure out how much the 2015 Dodge Challenger SRT Hellcat might cost, we should look at the price of the most comparable cars sold in America today. In my opinion, that list of vehicles includes the current 2014 Dodge Challenger SRT 392, the Ford Shelby GT500 Mustang, the Chevrolet Camaro ZL1, the Chevrolet Camaro Z/28, the Chevrolet Corvette Z06 and the Dodge Viper – or SRT Viper if you somehow prefer that nomenclature. The pricing and power levels of those cars are listed below. Prices are based on the entry pricing of the model in question or estimated numbers in the event that pricing is not yet available.

First off, the current 2014 Dodge Challenger SRT 392 with 470 horsepower has a starting price of $46,680 and when you add the automatic transmission option that price climbs by another $1,200. Once you begin adding options the price of the SRT 392 Challenger can quickly get up to $55,000. I expect that the Challenger SRT Hellcat will come very well appointed so imagine a near-loaded current Challenger, except with a new transmission, unique body panels and a supercharged engine that delivers 707 horsepower and 650lb-ft of torque…and you have a car that could easily cost $10,000 more than the current SRT Challenger.

$65,000 is a whole lot of money for a Dodge Challenger and it is much higher than some of the hopeful prices I’ve read from enthusiasts online who are expecting the Hellcat to start in the 50s. Also, while $65k is quite a bit more than the GT500 or ZL1, keep in mind that those prices are before any options have been added. SRT has a habit of making their cars loaded in standard form and a fully loaded GT500 starts closer to $70k while the loaded up ZL1 prices out around $68,000. When you consider the fact that the Hellcat Challenger will pack significantly more power than the other two supercharged high performance American muscle cars, a heavily equipped base price of $65,000 seems far more reasonable.

Also, we have to keep in mind that the Hellcat Challenger will offer a ton more power than the $75,000 Camaro Z/28 AND the $102,485 SRT Viper. The Hellcat won’t allow the Challenger to handle like the Z/28, but it will almost certainly outrun it in a straight line while still costing less at $65,000. The Viper pricing is also significant as while the Challenger Hellcat is almost certainly going to undercut the pricing of the V10 Viper – we can bet that the company won’t want to undercut it by too much. Should Chrysler focus closely on the Viper pricing, we could easily see the Hellcat model climb into the 70s, but my safe money is still in the mid to high 60s.

Chrysler Wont Sell a Ton of Hellcats for 65k
I know that in suggesting that the 2015 Dodge Challenger SRT Hellcat should cost around $65,000, many Mopar lovers out there are screaming that it is way too much money for a Challenger. They are also insisting that with a pricing like that, the company won’t sell very many of them and they’re right. However, Chrysler knows that they aren’t going to sell as many Hellcat models as they do SRT 392 models as not everyone is in the market for the world’s most powerful muscle car. The Chrysler Group knows that this will be a lower volume car, just like the Camaro ZL1 and the Ford GT500 Mustang.

Update: Here is your quick look at the 2015 Dodge Challenger SRT Hellcat launching on the drag strip

John Nussbaum wrote on July 4, 2014 - 12:40pm Permalink
You may be right on track. Lets not forget the Grand Cherokee SRT for 70 to $80.000, oh and the Viper for 140,000 with all the mark up. Chrysler can not give these cars a way either. I live in Las Vegas, NV and have never seen a new Grand Cherokee SRT or a new Viper. Here new cars are the norm and 12 cylinder AMGs and Lambos are everyday fair. If they charge that much and have add on stickers to push it to $75,000 It will be a perfect three in a row. I've walked out of three show rooms that charge sticker add on. When will we have to bail them out again? What can they be thinking? Who is there market? I make four times the average income and can not afford these cars.
Scott Grimes wrote on July 5, 2014 - 11:21am Permalink
Well said John. I agree with what you said totally. So much so that I think that Chrysler will not be stupid enough to price it in the mid sixties. I currently own an SRT 8 392 which I payed 50 K for with all options save a sunroof which I did not want. What are they really changing on the car? The main thing is their adding a blower. While it's true that a blower adds additional value to the car any other changes can be considered only as upgrades to options that already exist. So what's a blower actually worth. A factory blower should be around 10K. Motor Trend who I find to be a trustworthy source says the car will sell in the high fifties. I will go as far as to say 60 at the top of the scale. However, 65-70K is too much for a challenger and Chrysler knows it. Think for just a minute, if Chrysler prices this car at 59K they will sell many many more cars which will increase their bottom line. They already have one low volume car to carry the mantle (the Viper), they cannot afford two. No, my bet is that motor trend is right on with their estimate in the high fifties. I agree with the article above, that Chrysler will chase off most of the 392 owners if the price the Hellcat at 65,000.00. However, I disagree with the fact that they want to. Perhaps this is wishful thinking, but they have the perfect opportunity to seize control of this segment of the market. This is the chance to transform the Challenger from a low volume car as compared to it's competitors to the leader of the segment. This car is a game changer for Chrysler if they price it in the high fifties and that's the reason I believe they will do so. If any Chrysler execs reading this post, consider this. If the car is 60K or under I will order one as soon as I can. If not, then I will not because I cannot and that's probably the case for many if not most current SRT 8 owners. Here's to hoping they will do the right thing!
stratospuller wrote on July 12, 2014 - 2:48pm Permalink
Just thinking outside of the box r/t horsepower/torque....could a change in pulley and reflash of the computer push this beast closer to a 1k output? Just asking and speculatin'......
mark kalinowski wrote on July 5, 2014 - 12:12pm Permalink
140000 Viper and 80000 Cherokee? Your on crack. They don't sell for that in Ohio. VIPER is 104000 and Cherokee is 65000. Tomko dodge
Patrick Rall wrote on July 5, 2014 - 9:35pm Permalink
First, it would be "you're on crack", not "your on crack"... Second, I'm obviously not talking about dealership pricing and I dont think that John is either. I'm talking about MSRP. The base Viper now is around $102k, the GTS starts at $125k and adding options can put that up even higher. As for the Jeep, you can option it up to $75k+ right now so if it gets a hellcat, you can bet that it will easily top $80k. I'm glad to hear that in the middle of nowhere, they are selling the SRT Viper and Jeep for the base price, but that is sadly not the case everywhere.
Jerry Pointer wrote on July 5, 2014 - 9:40pm Permalink
"The main thing is their adding a blower. While it's true that a blower adds additional value to the car any other changes can be considered only as upgrades to options that already exist". I just love it when someone makes a comment without looking into the facts. And a 392 owner? This ride has a complete forged engine along with that blower. It also has a transmission that can handle the power that is only found on the Hellcat. This ride also has strengthened axles and driveshaft. Add all that up and see if you hit $10K. LOL
Joshcarmo wrote on July 11, 2014 - 5:25am Permalink
I have been expecting the car to come out at 65-70k this car is top to bottom revamped the only thing that's the same is the shell it has a fully adjustable suspension 90% of the engine was changed to handle the blower throwing with that all the design work the windtunnel the exhaust the rear axle the new differential the computer programming all the testing the new sensors and you could easily put this car at 80,000 but my guess is dodge wants every srt owner and enthusiasts to be able to reach it so 65-75k is right in the ball park with a trade in like a 2012 392 your looking a financing 40-50 k three of my friends and I will but one the first year I make 70k a year and my friends make over 100k it's not ment to be sold to a kid Flippin patties at your local restaurant
JJ wrote on July 11, 2014 - 9:58pm Permalink
70k a year lol. Way to blow your entire salary on a depreciating asset. Keep spending please, so I can make money on intra day shorts.