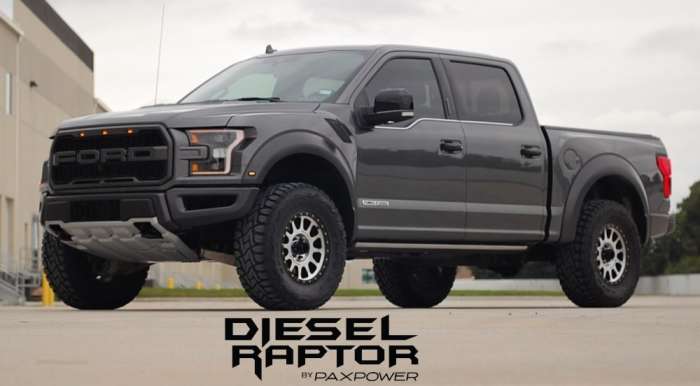 A new Ford F-150 Raptor with a combination of 300 horsepower and 550 lb-ft of torque from the 3.0-liter PowerStroke diesel is now available through the Texas-based tuning company and it isn’t as expensive as you might expect.
Advertisement

The current Ford F-150 Raptor is, without a doubt, the greatest off-road performance truck ever sold for public on-road use. The Raptor packs more power and offers more capabilities in more unusual settings than any truck on sale today or in the past, but there are some people out there who have an issue with the fact that Ford picked the 3.5-liter EcoBoost to power their off-road beast.

Although the output of 450 horsepower and 510 lb-ft of torque makes the strongest truck on the market, critics insist that it should have been powered by the 5.0-liter V8 (that is less powerful than the high output EcoBoost). For those people, there are a handful of companies building V8-powered Raptors in the aftermarket, but what about those folks who want a Raptor powered by the new 3.0-liter PowerStroke diesel?

Fortunately, the folks at PaxPower saw the need for a PowerStroke’d Raptor, so in addition to their V8 Raptor package, they now offer a full Raptor conversion for the new diesel-powered F-150 pickups.

The Diesel Raptor
There are two ways to create an F-150 Raptor powered by the new 3.0-liter PowerStroke diesel engine. You could remove the 3.5-liter EcoBoost from Raptor and replace it with the diesel engine, or you could replace all of the non-Raptor parts on a factory-equipped diesel truck. The engine swap seems simpler, but PaxPower has gone the other route.

The company will literally take your new Ford F-150 with the 3.0-liter PowerStroke diesel and swap in all of the key components from the Raptor. This includes the full suspension setup, the full body package, the underbody skid plates and the buyer’s choice of wheels and tires. As you can see in the picture above, the PaxPower diesel Raptor does not wear the factory wheels and tires, but I would guess that for an additional charge, they can set you up with the factory shoes as well.

Tires aside, when PaxPower is finished with the Raptor conversion, the customer’s F-150 will have the suspension components and body bits that create the Raptor’s unique look and unbeatable capabilities – except their Raptor will be powered by the new small PowerStroke diesel engine. It should be noted that PaxPower uses all Ford OEM parts, right down to the fasteners.

The Price
As you might imagine, switching the full suspension and most of the body panels isn’t cheap, but it costs less than you might expect. Having PaxPower just install the suspension setup of the Raptor in your non-Raptor F-150 starts at $7,450, but if you want the full package so that your diesel F-150 looks and performs like a Raptor, the conversion starts at $24,950.

The least expensive diesel-powered 2018 F-150 with four wheel drive is the Lariat package, which has an MSRP with destination of $49,935. When you add on the $25,000 upgrade charge, you are looking at a price right around $75,000 for the PaxPower diesel Raptor. That is about $20,000 more than a SuperCrew Raptor from Ford, but for the F-150 owner who wants the capabilities and look of the Raptor with diesel torque, PaxPower has the solution.