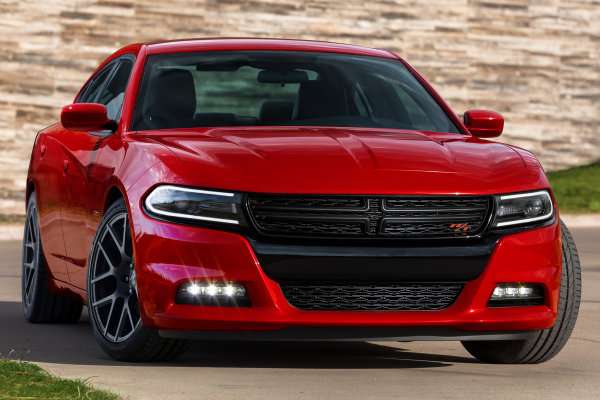 Since the 2015 Dodge Charger R/T was introduced last week at the 2014 New York International Auto Show, there have been critics who hate the new look for a variety of different reasons – but Chrysler doesn’t care if you hate the 2015 Charger design because there really isn’t any competition for the brawny Mopar sport sedan.
Advertisement

It probably sounds ridiculous to say that an automaker doesn’t care if a bunch of loudmouths online don’t like a new design, but with the 2015 Dodge Charger R/T – the Chrysler Group really isn’t worried about the people who passionately oppose the new design. There are a variety of reasons why every automaker doesn’t worry about people not liking a new design and that is why Ford isn’t worried about people who hate the 2015 Mustang, why General Motors isn’t worried about people hating the 2015 Corvette Stingray and why Chrysler doesn’t care if people hate the new Dodge Challenger. No matter what an automaker does, there are going to be people who hate the new look. Those people don’t hate the design so much as they simply can’t cope with change and those are the people who automakers don’t worry much about when rolling out a new model. Heck, there were plenty of people in the Mopar community who hated the original modern Dodge Charger because it was a sedan instead of a coupe and while some of those people continue to complain about the extra two doors – I know people who hated the idea of a Charger sedan who later owned one.

This is true of any new model, but it isn’t why Chrysler was able to be so bold with their seemingly premature refresh of the Dodge Charger R/T. Dodge isn’t worried about people hating the new Charger R/T because – frankly – there is no other realistic competitor for the Charger in the US market. If you don’t like a BBQ restaurant, you go to a different BBQ place. If you don’t like McDonalds, you go to Burger King. For the Charger, there is no other vehicle sold in America that can offer everything that the 2015 Charger will offer.

If you look at the large sedans that compete with the 2015 Dodge Charger in that segment, nothing offers the same reach as the Charger. The large sedan from General Motors is the front wheel drive Chevrolet Impala which only offers as much performance as the 3.6L V6 can make. GM has the Cadillac CTS V Sport and the upcoming Chevrolet SS performance sedan, but both of those models carry a higher starting price than the Charger SRT8 while offering lower performance than the Hemi powered Dodge sedan. Also, while the SS performance sedan (arguably the best competitor for the Charger in the US market) offers a similar combination with lots of power and rear wheel drive, it costs much more than the Charger R/T and makes much less power than the Charger SRT8. The SS only comes in one form and there is no way to get into one of those for under $44,000 or so while Charger R/T owners will get almost as much power with a far lower price. The large sedan from Ford Motor Company is the Taurus, and while you can get both front wheel drive and all wheel drive – along with the powerful EcoBoost V6 engine that packs comparable power to the Hemi V8. The Taurus SHO is arguably the closest competitor for the Charger R/T, except for those who demand rear wheel drive from their sport sedan. None of the Japanese companies offer a rear wheel drive large sedan or the power levels of the Charger and from the German automakers, you will pay big money to get the kind of power that you get with the Hemi powered Chargers.

In short, if you want a rear wheel drive full sized sedan that packs enough power to make claims of being a sport sedan, there is nothing in the same range of price and performance as the Dodge Charger. With that in mind, those folks who hate the new Charger look are welcome to hunt around for something that really competes in performance with a similar price – but the odds are good that those same people will end up learning to love the face of the 2015 Charger. The fact that no other automaker offers a true competitor for the Dodge Charger is why the Chrysler Group can afford to have some people hate the new look, as there is a good chance that some of those people will end up buying one overtime if they really want a high performance, rear wheel drive sedan that won’t break the bank.

Click here for a closer look at the 2015 Dodge Charger R/T from more angles, inside and out.