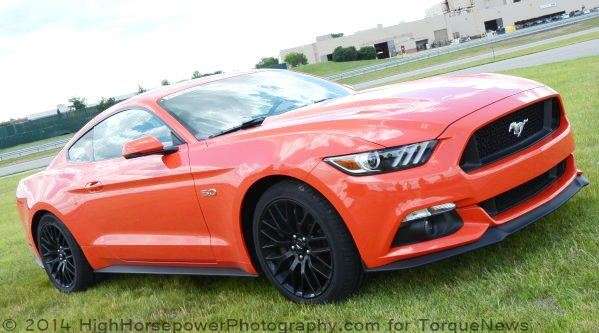 The EPA has finally gotten the first batch of official fuel economy numbers for the 2015 Ford Mustang added to their website and surprisingly, the returning Mustang V6 and Mustang GT models are less efficient than the comparable 2014 models – although that really isn’t going to have any impact on sales of the next gen pony car.
Advertisement

Before getting into the full fuel economy figures for the 2015 Ford Mustang lineup, I should point out that I’m only surprised by the fact that the 2015 models are less fuel friendly than the 2014 models due to the ongoing industry trend to always make vehicles more and more fuel efficient. The 2015 Mustang is a little heavier so lower fuel economy numbers do make sense, but I am still a bit surprised that the new models don’t get at least the same fuel economy numbers as the outgoing models.
Fortunately, the 2015 Ford Mustang could have dropped several MPGs across the entire lineup and it will still sell like crazy when it arrives later this year thanks to the cutting edge looking, the improved suspension setup and the powerful engine lineup.

Official 2015 Ford Mustang Fastback MPGs
The 2015 Ford Mustang fastback will be available in three trims – a base 3.7l V6, a 2.3L EcoBoost and the 5.0L V8 GT. As expected, the new 2.3L EcoBoost 4-cylinder uses turbocharging technology to be the most efficient option in the lineup and the most efficient muscle car on the market. When mated with the 6-speed automatic transmission, the 2015 Mustang EcoBoost returns 32 miles per gallon on the highway, 22mpg around town and a combined number of 25mpg. Those who opt for the 6-speed manual transmission can expect to see a drop to 31mpg on the highway, but the city number of 22mpg is better than the automatic transmission and so is the combined figure of 26mpg. These EcoBoost numbers are significantly better than anything from Dodge or Chevy and this advantage is exactly what I expected.

The 2015 Mustang GT receives a slight bump in horsepower, so it is a little easier to justify a drop in fuel economy figures. The Mustang GT with the 6-speed automatic is the more efficient option – but only by a very small margin. The self-shifting 2015 Mustang GT gets 25mpg on the highway, 19 combined and 16 in the city. The 6-speed manual transmission returns the same highway and combined figure, but city numbers drop to 15mpg. Once again, this represents a decline for both transmissions, as the 2014 Mustang GT with the automatic offered 25 highway, 20 combined and 18 in the city and the manual transmission offered 26 highway, 19 combined and 15 around town. The differences are minor, but considering that automakers strive to constantly improve numbers – I’m still a bit surprised that Ford didn’t at least match last year’s numbers. Fortunately, the Mustang GT is at least as efficient as the Camaro SS so those folks who are shopping for a V8 powered muscle car based on fuel economy may lean towards the Mustang…provided that there are actually people who shop for a V8 muscle car with any care of fuel economy numbers.

The Fuel Economy Drop Won’t Hurt 2015 Mustang Sales
There are two kinds of muscle car buyers – those who are concerned about the performance and feel of a proper muscle car and those who care about the look and style of a muscle car. The folks who are concerned with performance won’t care at all about the decline in fuel economy, especially since the decline is so minor. The 2015 Mustang GT has more power and a new suspension system and that is all that matters to those buyers who want to go fast.

As for the folks who want to buy a 2015 Ford Mustang based on style more than performance, the decline in fuel economy will make the V6 models less attractive, but that is where the 2015 Mustang EcoBoost comes into play. This new turbocharged 2.3L 4-cylinder offers more power and substantially better fuel economy than anything in the segment so those folks who want the look of the new Mustang and better fuel economy will be able to go for the new turbocharged models. Finally, those buyers who don’t care about high performance and don’t care about fuel economy can save a few bucks and buy the 2015 Mustang V6. It is less fuel efficient, but that really won’t make any difference thanks to the low MSRP.