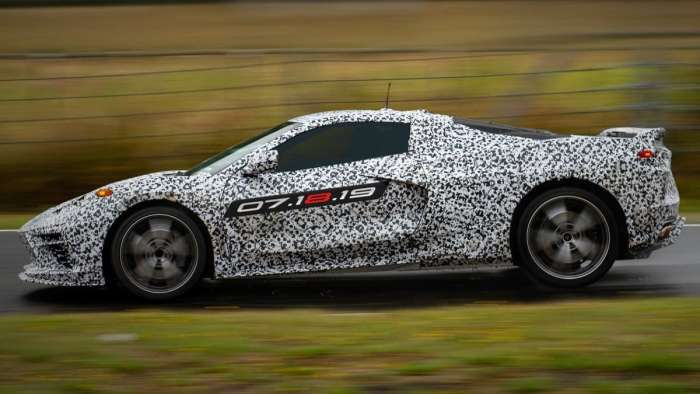 General Motors’ newest engine computer encryption system might make tuning the C8 Corvette more difficult, but I guarantee that we will eventually see tuning options for the mid-engine machine.
Advertisement

Earlier this week, the folks at Muscle Cars and Trucks published a piece discussing the encrypted engine computer system of the upcoming, mid-engined C8 Chevrolet Corvette. According to this report, the C8 will employ an all-new level of encryption as GM engineers attempt to keep tuners from making adjustments, but just as has been the case with past attempts to prevent tuning – the aftermarket will find a solution.

Encrypted Engine Computer
When this initial report spread across social media, a great many people seemed to be surprised that GM would take such a step to prevent owners from making more power, but this is not a new approach. The engine computer system of the LT5 in the new Corvette ZR1 was uniquely encrypted and at first, it was deemed impossible to tune, but after a few months of work, the code was cracked and tuning shops began adding big power to the supercharged supercar.

Along similar lines elsewhere in the automotive industry, FCA uses an encrypted computer system in their vehicles and while it took some time for the aftermarket to crack that system, it was cracked. Also, Tesla went so far as to challenge computer experts, claiming that their system could not be hacked, but it was and it didn’t take long.

Modification is Important
While we get why GM doesn’t want people poking around with the engine computer, a key aspect of owning a performance car for many people is the ability to upgrade and modify. If GM can actually make it impossible to tune the C8 Corvette, it will effectively cripple the high performance aftermarket support and that will turn away some buyers.

Sure, some people will buy the car and enjoy it in its stock form, but the high performance crowd has typically played a key role in the success of the Corvette, so introducing a generation of cars that cannot be tuned at all will have a long-term negative impact on the car.

Fortunately, I don’t believe that GM will be able to keep computer experts from unlocking the system, so in a couple years from now, I expect to be writing about an LT2-powered C8 Corvette with 1,200 horsepower via the aftermarket. If I am wrong, the American horsepower war as we know it could quickly be coming to an end.

Tom wrote on May 31, 2019 - 6:41am Permalink
I am guessing Chevy knows the limits of their chassis and doesn't want anyone exceeding it?
Casey360360 wrote on August 27, 2019 - 11:45am Permalink
That has nothing to do with it. They're doing this to try and "force" consumers to purchase the Z06 and the ZR1 or Zora for more power rather than buy the base model and make it even faster than those two will be. Quite simply, it's GM trying to make as money as possible. The Z06 is already confirmed to be a twin-turbo V8 on the same transmission and chassis, so the base model is plenty capable. This is becoming a common practice in the automotive industry.
Jesse wrote on May 31, 2019 - 6:42am Permalink
They said the c7 Corvette was "impenetrable." It didn't take tuners long to figure out the 'code.'
Casey360360 wrote on August 27, 2019 - 11:42am Permalink
How to make HP chasers and tuners buy Ford or Dodge in one easy step: GM's guide to turning away thousands explained.