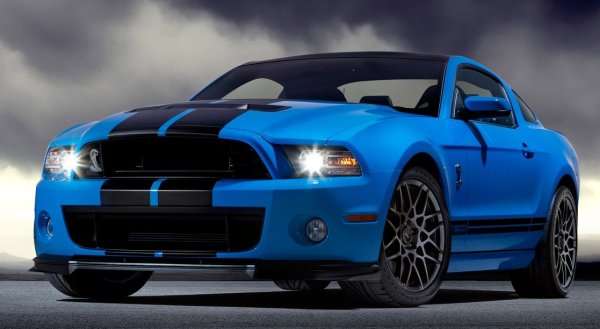 Next Ford Mustang Shelby GT500 Might Not Need a New Engine

There has been plenty of talk online about the next generation Ford Mustang Shelby GT500 having a new, never-before-seen engine, but based on the current Ford high performance engine lineup – the next GT500 could be incredible with a beefier version of a current Mustang engine.
Advertisement

While Ford Motor Company hasn’t made any official mention of a new high performance Shelby GT500 Mustang, there has long been a rumor that there is a monster-power Mustang coming sometime in the next few years. Of course, those rumors center around what might be tucked under the hood and the popular idea is that the next Mustang GT500 will have somewhere in the area of 750 to 800 horsepower.

Those rumors often discuss the need for a new engine, something like the previous SVT 5.8L supercharged V8 from the previous generation which would be unique to a GT500 model, but based on the success of the current 5.0L in the aftermarket world and the promising new 5.2L flat plane V8, I believe very strongly that Ford could roll out a monster Mustang using a worked version of one of those two engines.

A 5.0L-Powered GT500?
First up, the 5.0L V8 from the current Ford Mustang GT offers “only” 435 horsepower, but we have seen a long list of aftermarket supercharger packages for that engine which lay down well over 700 horsepower. The “Lebanon Mustang GT” with 727 horsepower costs under $40,000 out the door, but many people have criticized the fact that the downstream drivetrain components aren’t beefed up with the engine.

Imagine if Ford took a similar supercharger package from the Mustang GT with around 725 horsepower, but they fitted it up to a heavy duty transmission – including the new 10-speed automatic from the Camaro ZL1. The automaker could then add a heavier duty rear end, bigger brakes all around, some variation of the MagneRide suspension setup from the new Shelby GT350 and a unique body upgrade that would make it more aggressive and more aerodynamic, while also offering better cooling for the boosted V8.

Along the same lines, there have been rumors that the GT500 would feature a twin turbo setup rather than a supercharger setup, but regardless of the style of the forced induction setup – the 5.0L V8 with a beefier rotating assembly and stronger drivetrain would easily make the expected power levels.

A Boosted Flat Plane?
The next possibility is that the next generation Ford Mustang Shelby GT500 could use a boosted version of the 5.2L flat plane V8 from the new Shelby GT350. The most recognizable application of a flat plane road car before the GT350 was the Ferrari California T, which uses a turbocharged 3.8L mill to make 551 horsepower. Were Ford to add a pair of turbochargers to their 5.2L flat plane V8 and achieve a similar volumetric efficiency (145hp/liter), the GT500 could make around 754 horsepower – right in the rumored power range.

In addition to packing plenty of power, the turbocharged flat plane Shelby engine would offer more “wow factor” along with a better marketing angle. In much the same way that Ford has used the flat plane technology to talk up the GT350, they could do so even more with a 750-800 horsepower version.

The Ford GT Engine
Finally, the rumor that I consider to be the least likely is that the next gen Ford Mustang Shelby GT500 will pack the same high performance 3.5L EcoBoost as the new Ford GT supercar. We still don’t know much about the Ford GT engine, but we know that it will have a EcoBoost V6 based on the endurance racing engine that won LeMans this year.

While this engine could offer plenty of power to make the GT500 Mustang soar, it would take away some of the uniqueness of the Ford GT, which is expected to cost more than $400,000. Perhaps we will see the highest performance EcoBoost engine from the supercar in the Mustang someday – but they’re not going to have a $60k car sharing an engine with a $400k car.

Don wrote on July 27, 2016 - 8:48pm Permalink
No way a GT500 will be 60k, has to be ten k over the GT350R
Briane Howland wrote on August 16, 2016 - 4:45pm Permalink
Yeah I would definitely have to agree with you on that.
TomT wrote on July 28, 2016 - 9:00am Permalink
I have a hard time seeing Ford use the Voodoo motor in this application. The Coyote motor would offer much better value per HP, which is what the GT500 is about. It might even be possible to add a longer stroke crankshaft to increase the displacement.
Briane Howland wrote on August 16, 2016 - 4:44pm Permalink
They're not able to add a longer stroke crank something that anymore with their CNC Billet aluminum blocks have been able to do using longer cylinder sleeves, the stock 5.0 Coyote block's cylinder sleeves just aren't long enough and the Piston comes out of the bottom of the sleeve too much already to allow any more stroke. They could install longer cylinder sleeves but they're very expensive.
Art Woosley wrote on July 28, 2016 - 10:23am Permalink
The 10 speed automatic trans is NOT from the Camaro. The new transmission was develped by BOTH Ford and GM. Please get your facts straight!
Don wrote on July 28, 2016 - 11:52am Permalink
Art, do your home work, The 10 speed trans is in the ZL1 Camaro, so its safe to say "transmission out of the Camaro. This new 10 speed was built off the existing all GM 8 speed that been out for 2 + years. Not much Ford blood in this transmission, just Ford development sharing some costs.
don wrote on July 28, 2016 - 11:13am Permalink
Hey Art, you need to get some of your info correct. GM and Ford co developed the 10 speed auto trans yes, Camaro is the first to use it. If you read about the how this 10 speed was developed, it was directly off the great 8 speed that GM already developed and was using that they built 2 years ago by GM exclusively. There is far more GM blood in this transmission if not all.
Steve wrote on August 1, 2016 - 3:26pm Permalink
I don't know where you get your facts, Ford designed and developed the RWD 10 speed while GM created the 9 speed trans-axle. Why they did that is not relevant. The weight of the existing GM 8 speed was used as a design target and that is the only connection the existing GM 8 speed has with the new 10 speed transmission.
don wrote on July 28, 2016 - 11:47am Permalink
Art GM and Ford co developed the 10 speed trans but Its first use is in the Camaro, so its safe to say "the transmission from the Camaro". 2nd, if you research the development of this transmission, it is based off the 8 speed GM transmission built 2 years ago exclusively by GM. The great 10 speed has way more GM blood in it then Ford.
Dan wrote on August 2, 2016 - 7:06pm Permalink
Don, perhaps you should heed your own advice and do a little research of your own before spreading false information. The 2017 Camaro ZL1 is not the first vehicle to be sold with the 10r80 transmission, that would actually be the 2017 F150. You know, that vehicle they used to test the prototype in since 2014. Secondly, the transmission co-development partnership Ford and GM have has yielded two transmissions. A 9 speed front drive automatic and a 10 speed rear drive automatic. (Neither of which are based directly or indirectly off of the current 8 speed GM transmission.) The 9 speed is mostly a GM brainchild where the 10 speed is primarily a Ford brainchild. Yes, both Ford and GM engineers have their hands in both transmissions' design, but Ford holds the patents for the 10r80. (Patent #8,834,310, look it up.) All that being said, I don't think the author meant it as a slight to Ford, but it is not from the Camaro ZL1. If anything it's from the F150, seeing as how it was both tested in and first released in the F150. Both companies will have their own variants of the same basic design. It would've been more accurate to say from the F150.
Mike wrote on August 18, 2016 - 4:22am Permalink
Dan is correct, Don. In fact, even in drag racing, Chevys use ford rears and trannies. This 10 spd was co developed, primarily by Ford. At Chevy, It will be used in the C7 ZR1 first, then the ZL. But ultimately, it was in the the 17' F150 first. I worked on the project.