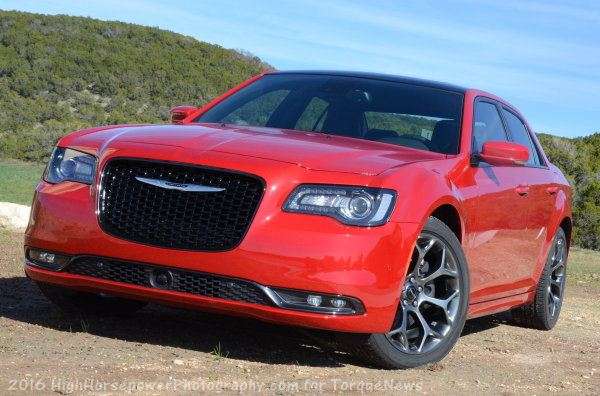 After Sergio Marchionne made a comment that the next generation Chrysler 300 sedan could be built alongside the new Chrysler Pacifica minivan, it seems possible the next 300 could be built on a front wheel drive chassis with a heavy emphasis on all wheel drive versions – allowing the company to better differentiate the 300 and the Dodge Charger.
Advertisement

It has long been expected that the next generation of the Chrysler 300, the Dodge Charger and the Dodge Challenger would arrive in or around 2018. It has also been expected that these new models would be based on shared chassis architecture from the new Alfa Romeo. Finally, it has been rumored that when the new 300, Charger and Challenger move to the new Alfa-based platform, they will be a little smaller, but really, none of that has been confirmed by the company.

This new bit of information, however, does come from the head of the Chrysler Group, Mr. Sergio Marchionne. While speaking at the official production launch of the new Chrysler Pacifica minivan, Marchionne mentioned that the plant was not only capable of building the impressive new minivan, but also the new Chrysler 300 in both front- and all-wheel drive.

He later clarified that there was no plan to shift the Chrysler 300 to a front wheel drive plant like the one in Windsor, but it seems odd that the boss would make a comment like that if there wasn’t some truth to the idea. After all, he could have chosen any of the current front wheel drive models to use for the example, but he picked the 300 sedan…right as it is about to be refreshed.

The problem is that all along, we have assumed that when the Chrysler 300 and Dodge Charger were refreshed, they would both be moved together in the same way. It was assumed by many that the Charger, 300 and Challenger would all go to their next generation on the same platform, but with the Alfa platform being rear wheel drive based – a front-wheel drive Chrysler 300 would need to be built on a different platform. If it was being built on a front-drive platform at the minivan plant, it seems logical that it would be built on the minivan platform.

Could the next Chrysler 300 be based on the Pacifica platform, with the option of front- or all-wheel drive? Unfortunately, it looks like a real possibility.

Could the Pacifica Chassis Work?
When you first hear the suggestion of the next Chrysler 300 being built on the same chassis platform and at the same plant as the Chrysler Pacifica, it seems very unlikely. After all, the 300 is a full sized sport sedan while the Pacifica is a minivan, so you couldn’t “fit” a 300 on the Pacifica platform while maintaining the large sedan form, right?

Why Would They Make the 300 Front Wheel Drive?
It can be argued that the Chrysler 300 helped to relaunch the modern era of the rear wheel drive Chrysler Group vehicles and the modern Hemi V8 engine family. While the Dodge Magnum, the Dodge Charger and the Dodge Challenger would all share the 300’s LX chassis platform and the same engine options, the 300 was the first of these modern muscle cars to hit the US market. Unfortunately, over the past few years, the 300 has become less muscular looking than it was back in 2005 and as the Charger has gotten more aggressive, there has been a shift in popularity. A refresh of the Chrysler 300 is more necessary at this point than is a similar refresh for the Charger or Challenger, but it seems as though the company may have much bigger plans for the large luxury sedan.

One thing to consider is Sergio Marchionne’s desire to remove competition across their brands and there is no question that the Chrysler 300 and the Dodge Charger are very, very similar vehicles. Really, shy of some interior tweaks, the exterior design and the marketing approach, the 300 and Charger are the exact same vehicles. If the automaker plans to keep both the Chrysler 300 and the Dodge Charger in their lineup as large sedans, it would make sense to build the 300 on a front-wheel drive platform while the Charger is built on a rear wheel drive platform. Although the two would be similar in size inside and out, the driving dynamics and capabilities of the two vehicles would obviously be very different.

Why is this Unfortunate?
Above, I mentioned that the next Chrysler 300 could “unfortunately” be built on the front-drive architecture of the new Pacifica. The Pacifica is a great driving minivan – likely the best on the market. I have no doubt that a new sedan built on that same platform will also be a great driver. However, I love the modern Chrysler 300 for what it is…a big, powerful, rear-wheel drive sport sedan. I understand that it is important to not have two similar vehicles in the company lineup and I understand that a front-wheel drive/all-wheel drive 300 would cater to a whole different group of prospective buyers. None of that will make me miss a high performance rear wheel drive sedan, though.

The good news is that Sergio Marchionne did clarify that there are no set plans to move the Chrysler 300 to a front-drive platform, so will any luck, the next gen 300 will maintain its muscle car-like attributes.

o.lafaye wrote on May 12, 2016 - 6:04pm Permalink
The Chrysler 200 doesn't look anything like a Chrysler. The "Chrysler Look" is highly appreciated and recognized by an admiring public and customers. Marchionne fails to see this simple scenario. His solution to discontinue the 200 is rthe beginning of the end for Chrysler...it will be gone by the late 2020s
vanBoven wrote on May 13, 2016 - 9:44am Permalink
People forget that Chrysler is DEAD. You can talk all you want about Chrysler was this, Chrysler used to make that, Chrysler as a car company does not exist any more. It is now a plastic name plate on a minivan and that will be it. 300 will be made until nobody wants it any-more, 200 will soon stop and the 100 will never come. The new car company will make in NA, Jeeps (lots of them), Ram trucks and vans and super sporty Dodge, SRT and Viper (new one coming in 3 years). And the new car company will make lots of other cars in their other world wide assembly plants like Mexico, Brazil, China and Italy for the world market. The US is going to be just a small part of the overall picture.
Squeaky_1 wrote on May 13, 2016 - 11:34am Permalink
Please don't give us any further stories with 300C and 'front wheel drive' in the same paragrahs. It is too upsetting. No, . . . just, no . . . it wasn't meant to be and not what God intended. Some things should remain as they were created on the first day!
Steve Colmar wrote on July 4, 2016 - 4:18am Permalink
The only successful large cars come from GM and FCA. I suggest that FCA not toy with a winning strategy. Furthermore, the new FWD platform show go to 200 in an effort to build the largest and best midsizer.
Timmy Green wrote on October 6, 2016 - 8:40pm Permalink
How quickly people forget the Chrysler 300M was FWD and no AWD option. The 300M was a great car and many examples are still on the market with sky-high miles on them, proving the longevity of the platform. I had an Intrepid that racked up 275k before the trans went south and I've plenty of other cars that didnt do half that mileage. The LH cars were a huge win for Chrysler at the time and while the performance enthusiast might lament the passing of a Hemi-powered RWD sedan, the reality is the majority of the buying public doesnt care. If they can have comfort, looks and good fuel mileage that car will outsell the current model without blinking...and if the offer a Sportbrake body style it go over even better. I loved my Magnum but the mpg sucked but I'd be all over a 300hp new FWD version. Bring it on Sergio!