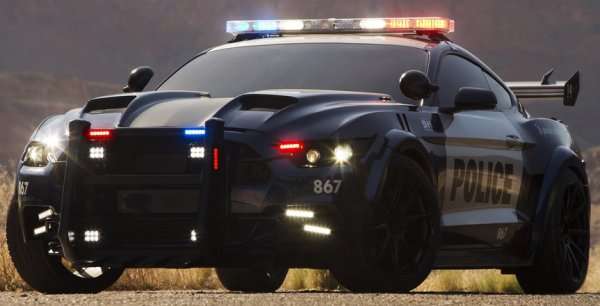 Director Michael Bay has offered up a look at another vehicle from the upcoming Transformers movie and once again, the Ford Mustang will play the villain in a police car livery – setting up what will surely be some great chase scenes with the new Chevrolet Camaro.
Advertisement

Last week, we introduced you to the newest Chevrolet Camaro to join the Transformers family, when director Michael Bay offered up a picture of the visually modified muscle car that will serve as the Autobot Bumblebee in Transformers: The Last Knight. This time, Bay has offered up a picture of the villainous Decepticon Barricade, who takes the form of a new Ford Mustang clad with police livery.

The Newest Transformer Ford Mustang
The Ford Mustang previously appeared in the Transformers movies as Barricade, a violent alien robot warrior from the Decepticon crew who takes the Earthly form of a Saleen S281 police car. The Barricade Mustang has had both major and minor roles in several Transformers movie and when The Last Knight debuts next summer, the alien robot warrior turned Mustang police vehicle will be back – this time with the look of the newest generation Ford muscle car.

While the new Transformers Ford Mustang doesn’t rely on a “tuner package” like that of the Saleen S281, the new Barricade vehicle mode is far from a typical modern Mustang. Like the previous Barricade Mustang, the Ford built for Transformers 5 has a push bar, police lighting from top to bottom and the “police” livery in black and white – complete with “To Punish and Enslave” on the rear quarter panels. Taking the customization a step further, this Mustang appears to have unique headlights and driving lights, a bulging hood with dual scoops and a massive rear wing. Also, while it is hard to see in this image, it looks like the Mustang might have a unique front fascia and custom wheels.

Ford-Mustang Battle on the Big Screen
While the sales race between the Ford Mustang and the Chevrolet Camaro isn’t much of a “race” right now, it is hard to think of two vehicles which have battled each other from day one as fiercely as these two American muscle cars. These cars have been battling on the road and on the track since the mid-1960s and when Transformers: The Last Knight hits the big screen next summer, we will get to see a Camaro and Mustang battle like never before. The special effects of the Transformers series are incredible so when you add those special effects to what would already be epic car chase scenes – horsepower junkies could be in for a treat when the new movie drops.

Along with Bumblebee the Autobot Camaro and Barricade the Decepticon Mustang, I would expect to see a handful of other high performance cars and with any luck, Michael Bay will continue to show those vehicles off during the year-long wait to the arrival of the movie in theaters around the country.