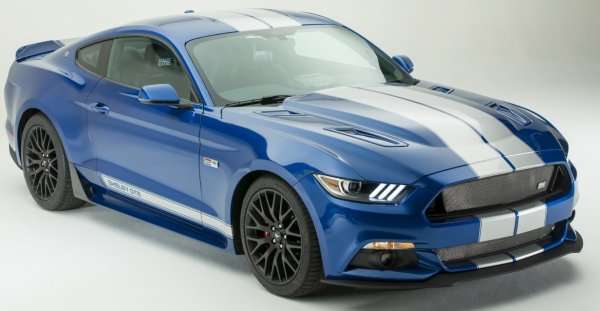 The folks at Shelby American have rolled out the information on their new Ford Mustang GTE package and while I love the look of the appearance-heavy package, I don’t like the price – as for $17,999 for the components alone, the new Mustang GTE is a pricey option for someone who wants a unique pony car.
Advertisement

Shelby American has a long and storied history of producing unique upgrade packages for the Ford Mustang, both through your local Ford dealership and via post-title packages that you get directly from Shelby (or a licensed retailer). The newest special Shelby Mustang is the GTE package, which adds a unique look on the outside, some handling goodies and a little extra power, but it does so with a price of $17,999.

The Shelby Mustang GTE
The Shelby Mustang GTE is available for the 2015-2017 Ford Mustang in either EcoBoost or GT trim and the modifications for each begins with a Ford Performance cat-back exhaust system and a Shelby Power Pack (throttle body, cold air intake, ECU tune), which lifts the EcoBoost 4-cylinder engine to 340 horsepower and 390lb-ft of torque while the 5.0L V8 jumps from 435hp and 400tq to 456hp and 424lb-ft of torque. To further improve the performance of the Mustang GTE, the Shelby package adds a Ford Performance handling package and Ford Performance wheels measuring 19x9 in and front and 19x9.5 out back – all of which are wrapped in “Shelby spec performance tires”.

The longest list of modifications for the Shelby Mustang GTE come in the way of appearance upgrades and I really like the end result. The GTE package adds a bulging hood with GT vents, unique Shelby upper and lower grille designs, a Ford Performance front splitter, aggressive Shelby lower rocker panels, a duckbill style rear spoiler and unique Shelby GTE badges and stripes.

I think that the exterior design of the new Shelby Mustang GTE is great and I really like the muscular look with the bulging hood, the flared side skirts and the low profile rear spoiler. I also imagine that the GTE with the extra power and improved handling bits is a noticeably better performer than your “normal” EcoBoost or GT models, but $17,999 seems like a big chunk of change for the components.

The Shelby Mustang GTE is pricey – but there is no denying that it is a great looking package.

George Eaklor wrote on September 6, 2016 - 8:56pm Permalink
Even thou Ford didn't get in the early race of producing a wild mustang with massive amounts of horsepower, I figured they would get one out either in 2016 or 1017. So now they've really started to shine with some pretty awesome numbers as to Hp and torque along with some good looking rides. I'm also glad they're getting the handling going with all this power. Can't wait to see some around town in St. Louis.
Steve wrote on September 7, 2016 - 10:12am Permalink
Ford does have warrantied and far more affordable options that match or exceed what Shelby, is offering. I don't understand why anyone would buy these Shelbie updates when you can have Ford perform the modifications covered by warranty for literally an 1/8 what Shelby is charging. And honestly I would say forget about numbers drive a Mustang GT, I seriously doubt you'll find it lacking in HP.
Kevin Ryan wrote on September 7, 2016 - 6:05am Permalink
So Ford is cheaping out on the Shelby. Gosh, didn't see this coming... Carrol will be rolling over in his grave.
Steve wrote on September 7, 2016 - 10:16am Permalink
How do you come up with that conclusion? The GTE is produced by Shelby Automobiles, Ford has little to do with their products.