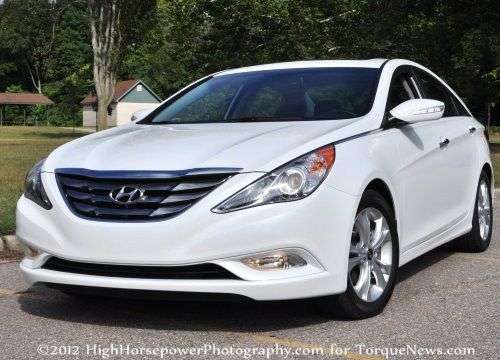 While speaking at an industry meeting in Seoul South Korea, Hyundai Chief Executive Officer Kim Choon-Ho told Reuters that the Korean automaker plans to launch a new version of the popular Hyundai Sonata in 2014 while the Genesis sedan would get a refresh of its own late in 2013.
Advertisement

Hyundai CEO Kim Choon-Ho didn’t provide any details on the new models, including whether we would first see the new Hyundai Sonata in 2014 or if it would be on the roads in 2014. The arrival of the new Genesis sedan in late 2013 could be a look at a 2014 model year vehicle, as making the world wait for a 2015 model that far in advance wouldn’t be likely for a refresh.

The Hyundai Sonata was the Korean automaker’s top selling car in the United States last year, acting as one of the key catalysts in Hyundai’s record year and market share increase in the United States while also being a major part of their continued growth. However, the Sonata ranked third in sales for the company in their home market of South Korea.

The next generation Hyundai Sonata will continue to do battle with some of the most popular cars in America, with models like the Toyota Camry, Ford Fusion and Chevrolet Malibu leading the midsized sedan segment. The Sonata as we know is in the States has been around since 2010 so it is roughly in the middle of its life cycle but with the Camry getting a refresh for the 2012 model year with the Fusion and Malibu following with new versions in 2013 – things could get tougher for the current Sonata. However, when the new Sonata debuts in 2014, the tables could be turned as the consumer market will have already had their shot at the new Ford, Chevy and Toyota sedans where the fresh new Sonata will be big news.

While the high volume Sonata was the biggest news mentioned by CEO Kim Choon-Ho, the classy Hyundai Genesis shouldn’t be ignored. The roomy Genesis sedan sits just below the Equus in the company lineup – offering a numbers of luxurious amenities and a powerful V8 engine. We can expect that the next generation of the Genesis, slated to arrive late in 2013, will continue to offer lots of power in a brawny full size sedan packed full of interior comforts…while leaving room for the high end Hyundai Equus to attract buyers with more refined tastes and much deeper pockets.

Over the past decade or so, Hyundai has arguably grown the most of any automaker doing business in the United States and their Sonata sedan is a glowing example of these improvements. Hyundai has gone from selling cheap Korean cars to selling good looking (albeit an acquired taste), powerful cars that are good on gas and that offer plenty of luxury inside and out. We can expect that the next Sonata will continue to progress made by the company over the past years and we can’t wait to see what they come up with for 2014.