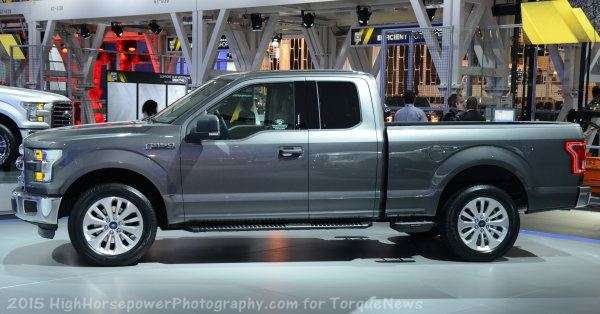 Ford Motor Company recently announced that Barrick Gold Corp ordered 35 new 2015 F150 pickups for their company vehicles and this is an important piece of information because Barrick was one of the companies that secretly and unknowingly tested the first aluminum body components that are used on the 2015 F150.
Advertisement

When you first read the announcement that Barrick Gold Corp had ordered 35 new 2015 Ford F150 pickups for their mining sites around the United States, it seemed like an odd thing for the Motor Company to brag about. After all, while 35 trucks is a nice sized purchase, it surely isn’t the biggest fleet of trucks in the US and it isn’t like Barrick is a household name. It would be one thing for an automaker to make an announcement if a well-known company like Disney or Best Buy made a big fleet purchase, but the Barrick announcement seemed odd.

The key bit of information isn’t really about the number of 2015 F150 pickups ordered by this relatively unknown gold mining company – it is the fact that Barrick was one of the three Ford fleet customers in the US who secretly tested the aluminum cargo box on previous F150 pickups. Those two test trucks performed well enough that Barrick decided to make a large fleet order – comprised entirely of new 2015 F150 pickups.

The Initial Test
Back in 2012, Barrick Gold Corp purchased a group of Ford F150 pickups and two of those trucks were fitted with experimental cargo boxes (beds) made from a new aluminum alloy instead of steel. These two trucks were sent into Barrick’s fleet, performing all of the grueling tasks as the rest of the trucks at the company’s Nevada gold mines through 2013 and 2014. After this two year testing period, Ford examined these experimental truck beds and gathered feedback from the Barrick workers who dealt with these trucks.

In short, those secret test trucks passed every test with flying colors, so when the 2015 Ford F150 was introduced with aluminum panels, the trucks used by Barrick with the aluminum cargo boxes were used as proof that the lightweight metal could stand up to the abuse of a hard working truck. According to what Ford says, Barrick and the other two companies which tested the prototype bed construction were all very happy with their trucks, but were they impressed enough to purchase new aluminum F150 pickups?

The answer for Barrick is “yes”.

“We are proud Barrick is purchasing all-new F-150s after testing early prototypes in some of the harshest conditions,” said Fritz Ahadi, Ford Commercial and Government Fleet Sales general manager. “This is terrific proof that even our toughest, most demanding customers recognize the benefits of high-strength, military-grade, aluminum alloy to help them get the job done.”

The Barrick Mining Trucks
Barrick Gold Corp has a fleet of more than 100 pickups and as they eclipse the 100,000 mile mark, the mining company will look to buy new trucks to replace them. Barrick has begun the process of replacing their aging trucks and the first batch of new worksite vehicles consists of 35 2015 Ford F150 pickups. All of these 35 trucks ordered by the gold mining company are SuperCab models with Four Wheel Drive and a mix of the 3.5L EcoBoost V6 and the 5.0L V8.

In other words, Barrick Gold Corp bought a handful of 2012 Ford F150 pickups and two of them had a similar aluminum construction to that found on the 2015 F150. They were so impressed by how these beds stood up to two years of abuse that the company went ahead and ordered 35 new trucks – all of which have the aluminum body panels. Provided that all of those trucks were the base model XL package with the 6.5 foot bed, the MSRP on 35 trucks would be around $875,000. Of course, fleet pricing brings that number down a bit, but even if Ford slashed $3,500 per truck, Barrick still laid out three quarters of a million dollars on new F150 pickups.

Barrick was so impressed that they spent upwards of $750,000 on new F150 pickups, and that should prove as a testament to anyone who questions the capabilities of the new aluminum body.

William J Bell Sr. wrote on February 6, 2015 - 6:40am Permalink
I have a 2013 F-150 Raptor SVT I am looking forward to the new 2017 any news or information would be great.
Farley Hicks wrote on February 8, 2015 - 10:28pm Permalink
I was the Barrick employee who initiated the Ford Fleet lease program beginning in 1999. I have been retired from Barrick for a little over a year now. I had the opportunity over the years to work with some amazing people at Ford Motor Company. My friendship with most of them continues even though I'm no longer affiliated with Ford or Barrick. Ford always stood behind their product and developed solutions for any issues that came up. I miss the fleet shows, where Ford would always keep their fleet customers up to date at these meetings and we got a first hand look at all the new products. Testing the secret pickup boxes was another demonstration of Fords willingness to keep fleets involved in product development and changes. Working with Ford and our local dealership are the things I miss most about my 23 year career with Barrick. Another reason I maintain my high regard for Ford Motor Company is, THEY DIDN'T TAKE THE BAILOUT MONEY!
Adam wrote on February 13, 2015 - 10:13am Permalink
I'm excited to see when Ford lets the aluminum "trickle down" to the other models in the lineup. I have a 2012 Explorer, and it could definitely benefit from the weight reduction.
MARK SMYTH wrote on February 17, 2015 - 11:31am Permalink
The writer of this article is mistaken or forgetting abut one thing.The beds of the original pickup test trucks had cracks in them. Ford was forced to redesign, re-engineer and retest the modified boxes with much thicker aluminum in the box. This is why there was an almost 4 month delay in the intro of the new truck. The original figure of weight saved was 700 pounds, but i am sure that at least 100 to 150 pounds of extra weight was added with the extra thickness added to the final production boxes. So the real weight saving is probably about 550 to 600 pounds, depending on the real amount of extra weight because of the thicker aluminum. Since Ford had bragged to the whole world about this amazing weight savings, they could not spend as much time as they would have liked to get the proper thickness with the redesigned heavier thickness, so they played it safe and made it thicker than they would have liked, so they could be sure the thicker box would be too thick rather than too thin. Time was so critical and Ford lost about 150,000 sales of the new truck, partly because of the 3 to 5 month delay.
Steve wrote on February 19, 2015 - 4:03pm Permalink
Isn't that scenario the purpose of real-world testing of new products? As far as your real weight savings, there seem s to be plenty of evidence that yes 700 lbs if you compare the heaviest 2014 truck with the lightest 2015 truck - with comparable cab / bed, drive train components. IMO what you are saying there shows Ford made sure the new truck was up to snuff regardless of that the short-term penalty was, which is just another reason to buy Ford.