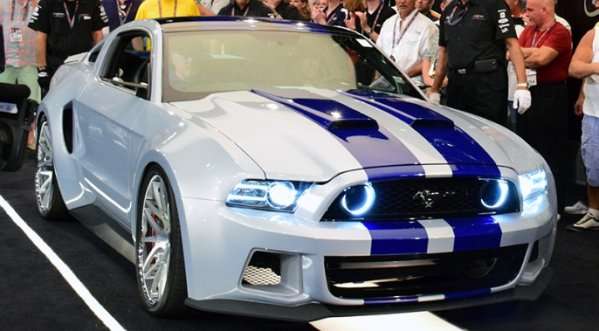 The Need for Speed Ford Mustang Raises $300,000 for Charity at Auction

Ford Motor Company announced earlier this week that the unique 2014 Ford Mustang GT that was built to serve as the hero car in the racing action movie Need for Speed sold at the Barrett Jackson Palm Beach Auction – with all of the $300,000 from the winning bid going to charity.
Advertisement

The Need for Speed movie took the adrenaline fueled racing action of the Need for Speed video game series and brought it to the big screen with a super modified 2014 Ford Mustang GT serving as the hero car. Although the movie – like the Need for Speed games – was packed full of multimillion dollar supercars that are the envy of car guys around the world, the movie’s director chose to pick a Ford Mustang as the car driven by main character Aaron Paul. Of course, we are to believe that this particular 2014 Ford Mustang GT has been modified to keep up with Lamborghinis, Ferraris, Bugattis and more so it wears a unique body package that makes it look more like a race ready beast. It might not be any quicker than your average 2014 Mustang GT sitting on a dealership lot right now, but this car has provenance like few other 2014 model year cars in the world.

Once the team had designed an elaborate body kit for the 2014 Ford Mustang GT (which, by the way, looks very much like something that you would add to your Mustang on the newer Need for Speed games that encourage aesthetic upgrades as well as performance improvements) and fitted up a massive set of 22” Forgiato wheels, this car was used for the filming of the Need for Speed movie and promotional events around the country...including the introduction of the 2015 Ford Mustang in Dearborn. In other words, this car is about as famous as they come and the bidders knew that all of the stars of the movie spent time in this very car.

Needless to say, a famous Hollywood car like this 2014 Ford Mustang GT is worthy of a big price tag – especially when the proceeds are going to charity. The Mustang was driven onto the auction block by John Felice, Ford Motor Company Vice President of U.S. marketing, sales and service and after a healthy bidding way, the final gavel sounded with a closing price of $300,000.

“Everyone has a Mustang story, and the new owner of this movie car now has one that is particularly special,” says Steve Ling, North America car marketing manager for Ford. “Snagging such a high-profile car right now – 50 years after the birth of America’s first pony car – is something to be cherished. And helping such an important cause makes the sale even more memorable.”

The winner of the Need for Speed Ford Mustang auction was Dave Flynn, the same man who purchased the first 2015 Chevrolet Camaro Z/28 for charity with a final price of $500,000. Flynn, who owns a chain of dealership in central Ohio, donated nearly a million dollars to charity this past weekend on just those two cars alone (Flynn very well may have purchased other cars as well) so while this gentleman is obviously a big car collector – he is also devoted to helping charities around the country with his deep pockets.

The entirety of the $300,000 from the Need for Speed Mustang will go to the Henry Ford Health System, a nonprofit group that helps to bring affordable health care to underprivileged families in and around Michigan.

“Watching the car cross the block in support of Henry Ford Health System was very rewarding,” says Sandy Hudson, chief development officer for the organization. “Dave Flynn did much more than just purchase a new car. His purchase will help so many people get access to healthcare.”