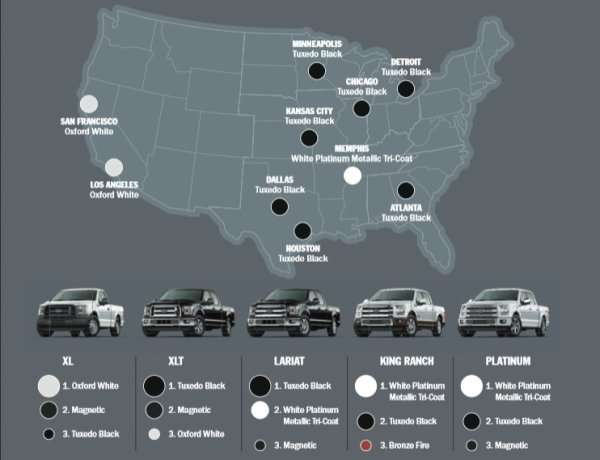 The Ford F Series pickup is the bestselling vehicle in the US and with the F150 being the most popular model within the F Series lineup, the launch of the 2015 F150 was a very big deal. Although there have been some production delays early on that slowed deliveries, the 2015 F150 is flowing freely to dealerships and new owners around the country.

Now that Ford is nearing their planning supply volumes at dealerships around the country, sales numbers are finally where the Motor Company wants them to be and while we don’t have any specific numbers – Ford has put together a graphic explaining which colors are the most commonly picked across each of the five available 2015 trimlines.

F150 Buyers Love Black, White and Grey
The 2015 Ford F150 is offered in 5 trimlines – XL, XLT, Lariat, King Ranch and Platinum. Ford has put together a list of the top three most popular colors for each of the trimlines and among those 15 line items, there are only five colors list – total.

Those buyers who picked the Lariat package for the 2015 F150 also liked Tuxedo Black the best and Magnetic third and a white second – Lariat owners preferred the pricier White Platinum Metallic Tri-Coat over Oxford White. That higher end White Platinum was also the most popular colors among those buyers who went with the F150 in King Ranch and Platinum trims, with Tuxedo Black ranking second among the two top trimlines. Magnetic was the third most popular for the premium Platinum trim. but King Ranch owners were the only to favor a truck with some color – picking Bronze Fire as their third favorite color.

Black, White Favored in Key Markets
In addition to breaking down the 2015 F150 colors by popularity, Ford also offered a list of key truck-buying cities and listed the most popular colors for the new half ton pickup in and around those metropolitan areas.