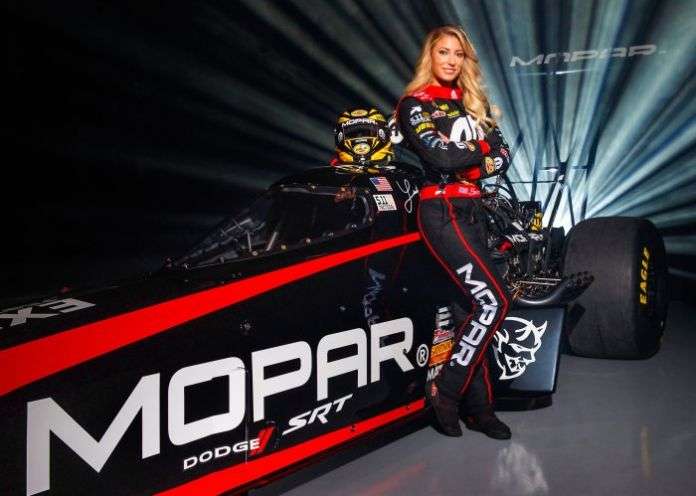 Mopar Back to Sponsor Hagan's Dodge Charger, Pritchett's Dragster in 2018

FCA’s Mopar division has renewed its sponsorship of Matt Hagan’s Dodge Charger R/T funny car for the 2018 NHRA racing season while also expanding its sponsorship of Leah Pritchett’s top fuel dragster – giving the Mopar brand a good chance of spending lots of time in the winner’s circle in the coming year.
Advertisement

2018 marks the 10th season for Matt Hagan and his Don Schumacher Racing Dodge Charger R/T funny car and once again, Mopar will be a primary sponsor of the 10,000-horsepower race car. Also, after serving as the primary sponsor of Leah Pritchett’s Don Schumacher Racing top fuel dragster for two races last year, the Mopar colors will cover her car for seven races during the 2018 schedule.

“Mopar and Dodge have a winning heritage at the drag strip, and our brands are working even closer together in 2018 to continue that tradition with a lineup that includes Leah Pritchett, Matt Hagan and the entire Don Schumacher Racing organization,” said Pietro Gorlier, Head of Parts and Service (Mopar), FCA. “From the professional classes to the Sportsman ranks to the enthusiast experience, we are committed to connecting with NHRA racers and fans who are passionate about horsepower both at the track and on the street.”

Championship Possibilities for Mopar
Both Leah Pritchett and Matt Hagan had strong seasons in 2017. They both had four event wins during the course of the season, they both spent all season towards the top of the championship leaderboard and they both settled for a disappointing fifth-place finish at the end of the season. With stronger performances late in the season, Pritchett and Hagan would have had a real shot at the 2017 NHRA championship in their respective divisions, so coming into 2018 – these two Mopar-backed drivers are frontrunners for the titles.

That gives Mopar a shot at a couple of premier motorsports titles in 2018, but it also showcases FCA’s performance brand in front of the crowd which best-appreciates the approach of their performance road vehicles.

“If you’ve ever been to an NHRA race, you can feel the energy and enthusiasm the crowd has for both the drivers and our Dodge performance machines,” said Tim Kuniskis, Head of Passenger Cars, Dodge//SRT, Chrysler and FIAT, FCA North America. “That passionate NHRA fan base is very well aligned with our enthusiasts, so expanding our presence to three times the number of NHRA races this year really helps us connect with our customers where they live and breathe. And with the increased number of Drag Paks, supported by our SRT Engineering team, competing each week, the technology transfer from what we learn on the strip to what we are putting into our production cars – like the 840-horsepower Demon and 707-horsepower Hellcats – continues to grow at a rapid pace.”

Finally, Hagan and Pritchett both won the opening event of 2017, so as the teams head into the 2018 Winternationals with their fresh sponsorship deals, Team Mopar is looking to start piling up the wins early in the season.