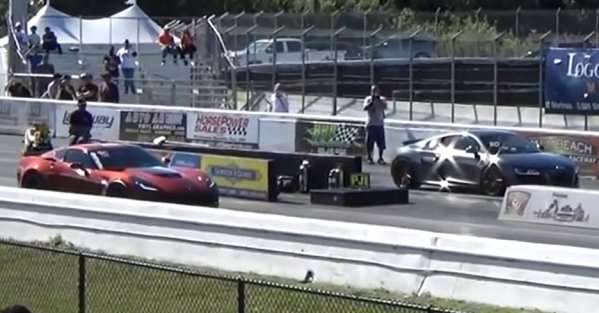 The 2015 Chevrolet Corvette Z06 is marketed as the most track capable Corvette of all time by General Motors and today, we bring you a first look at a lightly modified C7 Z06 in action on the quarter mile as it beats up on an Audi R8.
Advertisement

The 2015 Chevrolet Corvette Z06 is powered by a new supercharged 6.2L LT4 V8 that is promised to deliver 650 horsepower and 650lb-ft of torque. Thanks to the ease of modifying a factory supercharged engine, we all knew that it wouldn’t be long before we saw the newest super-Vette packing even more power. That day has come, as this video shows a 2015 Corvette Z06 with a handful of very common, very simple modifications racing on the quarter mile with an Audi R8.

Not surprisingly, the results are not good ones for the $100k+ Audi.

The Modified 2015 Corvette Z06
According to the details at the beginning of this video, this 2015 Chevrolet Corvette Z06 has been equipped with headers and a full exhaust system, a new supercharger pulley and an engine calibration. The headers and exhaust generally increase power by allowing for better flow while the new supercharger pulley adds more boost and the engine tune adjusts the fuel flow, spark timing and the other engine parameters to make the most power possible. These are incredibly common modifications among modern performance models and in the case of this Corvette, the headers, exhaust, pulley and tune have increased the power enough to help this Z06 to make 661 rear wheel horsepower.

For comparison, the first dyno numbers that we covered here on TorqueNews for the 2015 Corvette Z06 with the manual transmission in factory stock form yielded 585 rear wheel horsepower, so these modifications have allowed the LT4 to make an additional 76 horsepower at the wheels. Provided that the previous Z06 dyno numbers were accurate and the new Corvette only loses 11% of its power between the engine and the wheels, the headers, exhaust, pulley and tune have increased the engine power numbers from 650 to 733 horsepower.

The Worked Z06 Blasts the R8
The video below begins with a short mod list, followed by a rear-view burnout shot that lets us hear the roar of the LT4 with the aftermarket exhaust components. We then see that same burnout from the grandstands, followed by both the Corvette and the Audi staging for the race. Although you might expect the all-wheel drive Audi to have a big starting line advantage, the Corvette jumps out at the starting line and never looks back. The new American supercar beats the R8 by a full second, with the Z06 running an 11.04 to the Audi’s 12.04.

While it is fun to see the new Corvette Z06 with a few mods crushing an all-wheel drive German supercar that costs considerably more, Im a little surprised that the Corvette didn’t get to the finish line even quicker.

The 2015 Corvette Z06 with the manual transmission is supposed to run an 11.20 quarter mile with a trap speed of 127 miles per hour, according to General Motors. This Z06 ran almost 2 tenths quicker, which is good, but it seems like an increase of 76 horsepower should get the car into the 10s. More importantly, the trap speed of 128 is only 1 mile per hour faster than a bone stock Z06 – and that number should almost certainly be higher than that.

In any case, this video is a great early example of a modified 2015 Corvette Z06 handing a beating to a European supercar, with a soundtrack provided by the LT4 V8 so crank up your speakers and enjoy!