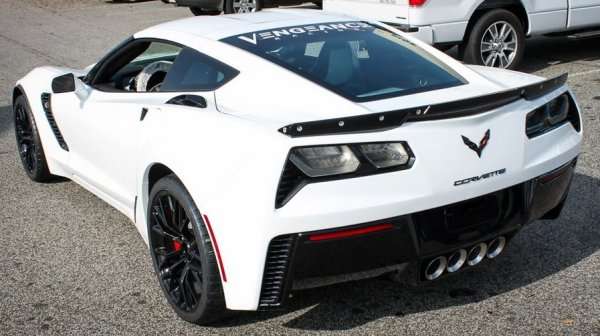 Among the first buyers of the 2015 Chevrolet Corvette Z06 is the expert tuning shop Vengeance Racing and shortly after taking delivery of their new C7 supercar, the Vengeance team put the new Z on the dyno to see how much power it puts to the ground – and the results are very impressive.
Advertisement

The 2015 Chevrolet Corvette Z06 is marketed as the most track capable Corvette of all time and a big part of that claim is the new LT4 V8. This new supercharged mill is said to offer 650 horsepower and 650lb-ft of torque, making it the most powerful GM production car ever and as it the case with every new performance car to hit the market – we all want to know how much power it puts to the wheels.

Well, the folks from Vengeance Racing got their new 2015 Corvette Z06 and after doing a monstrous, smokey burnout in the dealership parking lot, they raced off to a dyno to get some baseline power numbers ahead of their first attempt at tuning The Big Nasty. As expected, the dyno numbers are very good for the 2016 Z06, but they are actually a little better than expected.

Stock Corvette Z06 Dyno Numbers
The 2015 Chevrolet Corvette Z06 owned by Vengeance Racing is fitted with the 7-speed manual transmission and, like all new Z06 Corvettes, this beast is said to make 650 horsepower and 650lb-ft of torque at the transmission. When estimating the amount of power sent to the wheels of a rear wheel drive car with a manual transmission, we expect a power loss of about 15-18% so in theory, the C7 Z06 with the 7-speed gearbox should send about 552 horsepower and 552lb-ft of torque to the rear wheels.

On the dyno, the Vengeance Racing Corvette Z06 put down 585 rear wheel horsepower and 617lb-ft of rear wheel torque. These numbers are far higher than those estimated numbers using a 15% drivetrain loss and that means one of two things. Either the Corvette Z06 has one of the most efficient rear wheel drive configurations ever – or GM has underrated the new Z06.

What These Huge Numbers Mean
Provided that both the dyno numbers and the advertised power numbers for the 2015 Corvette Z06 are accurate, the new Z06 exhibits a drivetrain loss of just 10% in terms of horsepower, while just 6% of the torque is lost between the engine and the wheels. Those are incredibly low drivetrain loss rates, which leads me to believe very strongly that the advertised power ratings for the new Corvette Z06 are underrated by the automaker.

If we use the traditional 15% drivetrain loss ratio and do the math with the actual rear wheel power figures from the Vengeance Racing dyno sessions, the numbers are significantly higher than the official specs from GM. 585 wheel horsepower in a drivetrain that is 85% efficient would be making around 688 horsepower at the crankshaft and 617lb-ft of rear wheel torque would translate to a bone chilling figure of 727lb-ft of torque.

When the Vengeance Racing crew picked up their Corvette Z06 at Rick Hendrick Chevrolet, they ran the first mile with very high wheelspeed without moving more than a few feet…and you can watch that exhibition of tire destruction in the video below.

Casey wrote on December 14, 2014 - 11:56am Permalink
Was zero research before writing this article? There are several production cars (and pickup trucks, and suvs) that make more torque than that. Nothing can be "the most powerful" in terms of torque alone. Torque ≠ power. 103hp lost through a modern manual sports car 2wd drivetrain? Lol no. Can't wait until someone reputable pulls one of these engines and dyno's it.
Kevin wrote on December 16, 2014 - 5:54pm Permalink
After a careful 500 mile break in, and fluids in the engine, trans, diff replaced, mine made 571/580 hp/tq. All dynos (especially chassis dynos) can yield results all over the map. A tune and just a few mods yielded another 50/40 hp/tq improvements. I'm very happy with the car so far.
Brian wrote on August 20, 2018 - 9:52pm Permalink
It’s not about those two things. It’s about the fact that you have fallen prey to the theory that you can assign a fixed percentage to the loss. It’s closer to a fixed amount. Yes, there is some additional loss from increased load. Early C5 drivetrains typically lost 45-55 hp at the wheels when dynoed stock using rated hp. Newer C7 drivetrains appear to be losing about 70-75 or so, at least at the Z06/ZR1 level. I could see that with the increased strength, hence, weight of the components.

Tesla Contemplates A New Strategy for China Retail even As Sales Boom
Jay Leno on Elon Musk & EVs: “I Think He Should Get ... Credit"
END_OF_DOCUMENT_TOKEN_TO_BE_REPLACED