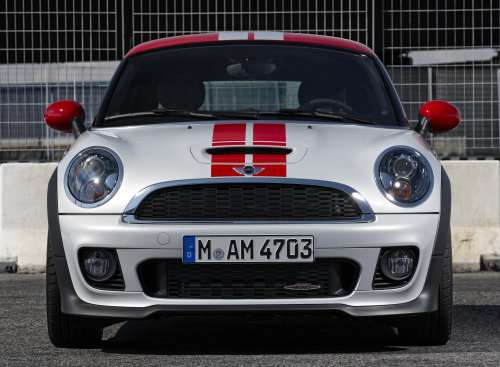 Just yesterday Mini dropped the curtain on the 2012 Mini Cooper Coupe and today, the company has offered pricing for the entire 2012 model year lineup.
Advertisement

First and foremost, the sporty new 2012 Mini Cooper Coupe comes with a base price of $22,000 with the naturally aspirated 1.6L 4-cylinder with 121hp and a 6-speed manual transmission. If you step up to the 2012 Cooper S Coupe with the 181hp turbocharged 1.6L engine, the prices comes up to $25,300 and if you go for the top of the line John Cooper Works Coupe, the price reaches $31,900. That is a lot of coin for the 2-seater JCW Cooper Coupe but with 208 horsepower and 207lb-ft of torque, this should be a pretty fiery little car.

The 2012 Mini Cooper Hardtop sees its base model rise $100 to $20,200 while the Cooper S Hardtop climbs by the same amount to $23,800. The 2012 Mini John Cooper Works Hardtop climbs $800 to $30,600 but these high end models include an aero package that is currently offered as an optional accessory for 2011 model year JCW models. Today’s pricing announcement doesn’t go into much detail on that aero kit, but if it is the same package as what was offered as an accessory for the 2011 model year, 2012 JCW Hardtop buyers will get an aero package that cost $2,111 as an option for just $800.

The roomy Mini Cooper Clubman is next, with the base model and Cooper S Clubman both seeing the same $100 increase as the first two trims of the hardtop as they rise to $21,900 and $25,600 respectively. The John Cooper Works version of the 2012 Clubman does not receive the same standard additions as the Hardtop so it also sees a $100 price hike for the new year, with the price starting at $32,100.

The next piece of the Mini Cooper puzzle will be the introduction of the topless “speedster” version of the new Cooper Coupe but for the time being, the modern Mini Cooper brand has put together a very impressive collection of affordable, fun compacts.

Anonymous wrote on August 3, 2011 - 1:54pm Permalink
You have the Mini Cooper Clubman listed twice with different prices. I suspect one of them should be the "Countryman" probably the 2nd Clubman entry.

LG's New EV Battery Plant Is a Welcome News for Tesla
Tesla Giga Berlin's New Hurdle: It's Not Only the Gov't, but Now Tesla Itself
END_OF_DOCUMENT_TOKEN_TO_BE_REPLACED