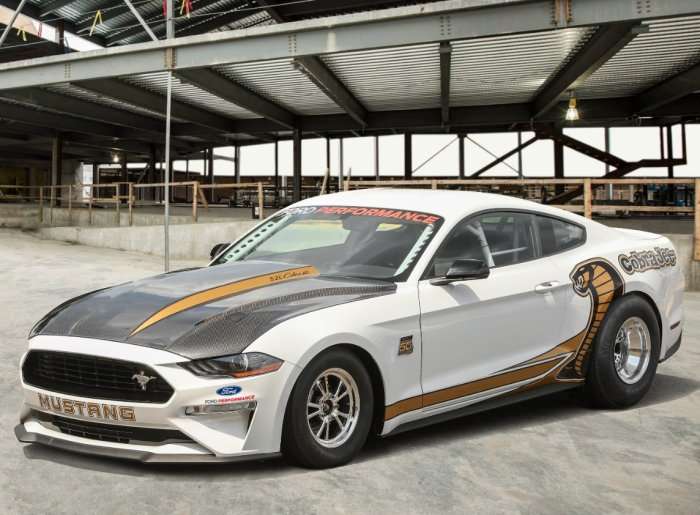 The 2018 Ford Mustang Cobra Jet drag racing package will make its formal debut this weekend at the Woodward Dream Cruise, but Ford Performance offered up all of the juicy details of the new race car earlier today – a car which is likely to run well into the low 8-second range in competition.
Advertisement

In the world of Super Stock racing, the Ford Mustang Cobra Jet has been one of the leaders for decades. The first Cobra Jet Mustang was introduced back in 1968 and the modern program was reborn in 2008. In other words, 2018 marks the 50th anniversary since the Cobra Jet racing program was introduced while also being the 10th anniversary of the modern program – a program which has seen the mighty Mustang win a whole lot of races.

To celebrate the 50th anniversary of the Cobra Jet program, Ford Racing has rolled out the 2018 version as the quickest to date – or the car which is prepared from the factory to legally run the best elapsed times.

“From the very first Mustang Cobra Jets dominating the 1968 NHRA Winternationals to our modern-day racers, the Ford Performance Parts team continues to build on Cobra Jet’s success at the track over five decades,” said Eric Cin, global director, Ford Performance Parts. “This has inspired generations of Mustang fans to create their own performance machines for the street.”

2018 Mustang Cobra Jet Details
The 2018 Ford Racing Mustang Cobra Jet is powered by a new 5.2-liter V8 that is based on the 5.0-liter Mustang GT production engine. This 5.2-liter mill is topped by a 3.0-liter Whipple supercharger, while a race-ready automatic transmission, a heavy duty 9-inch rear differential, adjustable drag racing suspension and big, fat drag slicks all work together to put the power to the ground.

In addition to all of that, the Mustang Cobra Jet also comes with low-drag, lightweight brakes, the unique body design shown above with Cobra Jet graphics and all of the safety features (including a roll cage, racing seat and harnesses) required to cover the quarter mile in the low 8-second range as speeds top 150 miles per hour.

Drag Racing Package Clarified
It has been brought to my attention that many people aren’t aware of the difference between the Mustang Cobra Jet and the drag race-oriented Dodge Challengers. The 2018 Dodge Demon and the 2019 Scat Pack 1320 have features that make them better on the drag strip, but those cars are both fully street legal. The Cobra Jet is sold with a serial number and a bill of sale rather than a VIN and a title, so these Mustangs cannot be registered for road use in the United States.

The competitors for the new Ford Mustang Cobra Jet are the Chevrolet Camaro COPO and the Dodge Challenger Drag Pak, both of which are also not legal for street use. These three cars compete in the NHRA Factory Super Stock class and in most cases, the field is running in the mid-to-low 8-second range while the class record is held by a Dodge Challenger Drag Pak driven by Geoff Turk, which ran a 7.996 at 170.1 miles per hour earlier this year.

LG's New EV Battery Plant Is a Welcome News for Tesla
Tesla Giga Berlin's New Hurdle: It's Not Only the Gov't, but Now Tesla Itself
END_OF_DOCUMENT_TOKEN_TO_BE_REPLACED