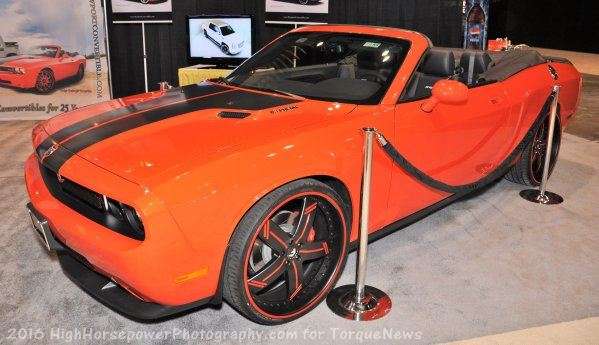 The modern Dodge Challenger has never been offered as a convertible while both the Ford Mustang and the Chevrolet Camaro have, but while some people insist that a Challenger convertible would have a big impact on sales – polling a handful of Mopar enthusiast group shows fairly low interested in a drop-top Dodge muscle car.
Advertisement

Over the past five years, the Chevrolet Camaro and Ford Mustang have outsold the Dodge Challenger each year and while the Mopar muscle car occasionally grabs the second spot in monthly sales, the Challenger has never led the segment in sales. Some people believe that the lack of a Challenger convertible is one of the reasons for the difference in sales numbers between the Dodge and the other two muscle cars, but in polling a collection of Mopar fan pages on Facebook and the huge Mopar fan community at LXForums.com, it looks like the interest in a Challenger convertible is much lower than some might expect.

Honestly, the interest in a Dodge Challenger convertible for the next generation is much lower than I expected.

Many Mopar Fans Don’t Want a Challenger Convertible
I am the owner of a classic Mopar muscle car and I am very active in the Mopar enthusiast community. I have the pleasure of helping out on a variety of different Mopar-themed Facebook pages and across those many pages, there is a huge spread in the interests of the folks who are active. In other words, these pages are not groups of people with interest in a specific type or genre or vehicles - including truck fans, muscle car fans, tuner fans, etc.

I polled each of these Facebook fan groups and the community at LXForums.com if they would be interested in a next generation Dodge Challenger convertible if the price was reasonable (relative to the rest of the segment) and if the performance levels were not severely diminished by removal of the top. Basically, I asked these groups if they would buy a Challenger convertible over a coupe if the price wasn’t outrageous and the extra weight didn’t kill the performance.

In every group, the response was an overwhelming “no”.

While there was definitely some interest in a next gen Challenger convertible across the collection of Mopar enthusiast groups polled, the final rate of No to Yes was about 4 to 1, so roughly 20% showed interest in picking a convertible over a coupe. It should be noted that there were some fans who were on the fence and they couldn’t make a decision without actually seeing the car and the price tag, but since they were considering the idea, I moved them to the “yes” group. On the other hand, among the hundreds of “No” votes, many of them were passionately against the idea of a drop top Challenger.

Paul T wrote on June 16, 2016 - 7:30am Permalink
Long before there were rumblings about a Challenger vert, I saw a home grown one in Massachusetts. I spoke to the owner who told me they had gotten the job done, although I didn't get the particulars. For this convertible lover it was beautiful to behold.
FP wrote on April 12, 2017 - 9:10am Permalink
You only polled mopar enthusiasts... maybe some people are not mopar enthusiasts because they don't offer a competitive convertible?
Jay in PA wrote on July 4, 2017 - 7:17pm Permalink
I've been through 2 New Mustang convertibles since the Challenger has been out and I'm looking for another car. I would've bought a Challenger each of those times and this time.
mark wrote on August 6, 2017 - 12:24am Permalink
Im waiting for the challenger convertible. what a hot car. when it comes available im buying it. its all about style. what a sexy car
Paul wrote on October 4, 2017 - 2:10pm Permalink
Not certain if your poll is a reliable predictor of Challenger Convertible sales or not, but I can tell you I would buy one in a heart beat (assuming manual transmission of course). I also do not participate in polls of any kind and do not participate with Facebook other than having an account. The Challenger is way more awesome than the others in its class and Chrysler/Dodge needs to bolster its convertible lineup. No more convertible crossfire or even convertible PT cruiser. I say now is the time for the Charger Convertible comeback!
Nate wrote on October 6, 2017 - 3:15pm Permalink
Why only MOPAR??? I am looking for a 2018 and am going with the Camero ONLY because the Challenger does not have a drop top. IF you polled car buyers in general who are looking at the Mustang, Camero and Challenger you would probably discover a whole new line of potential future MOPAR and owners if only Dodge realized what they are lacking....now off to by my Camero drop top with 40 grand Dodge will not see. Sorry Dodge.....wake up!
Travis Metcalfe wrote on October 11, 2017 - 12:51am Permalink
I have been waiting for a Challenger convertible for about 5 years now. Getting off bikes and would love a Drop Top Custom conversion but just can not justify the cost. The used ones I find are $48K + (asking price).. a year ago I missed a black '14 RT that sold foe $36K...still kicking myself for missing that one....A year before that was a 2010 for $30K...I did not know that one was for sale until it was sold...I did pass on a '13 for $33K...just not the right color.. Maybe I am just too picky...but the Drop Tops do come up for sale from time to time... Test drove a used 2014 Camaro SS convert last night...Wow..$20K for a used Camaro convert...I really wish the Challenger would come out with a factory convertible....I would to pay a premium for a factory convert... I agree with the prior remarks...If you just ask Dodge owners now you are missing all the people (Like me) that would be Challenger owners if there was a convertible offered...I would probably be on my 2nd or third one by now....
Juan Santana wrote on December 20, 2017 - 6:30am Permalink
Dodge needs to come out with a challenger convertible. I would buy one immediately and know that several of my friends would do the same as long as it's affordable.
Anthony wrote on February 22, 2018 - 7:29pm Permalink
I sold my Challenger because it just didn’t fit my situation to be my primary car and I couldn’t afford to keep it as a weekend car. I loved/love that car. If they came out with a convertible version, I would do whatever I need to do to buy that car. This poll is pointless because Mopar enthusiasts care 1st and foremost about performance. Convertibles cater to a different audience. Plus there probably would be a lot more Mopar enthusiasts today if people would’ve had the convertible option all these years. If you like convertibles, then you bought a Chevy or a ford and your not going to be on a Mopar site are you...
Mike Ocelnik wrote on August 9, 2018 - 2:07pm Permalink
In 2016, I was shopping for a new convertible, Challenge would of been at the top of the list, except it didn’t make the list because it wasn’t available in a convertible. I did buy a Z06 Convertible.