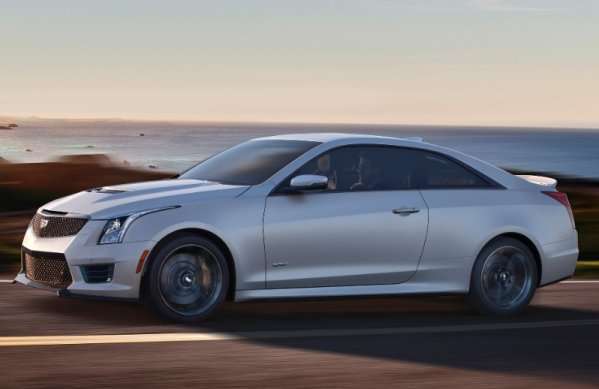 Last week we looked at the leaked images of the 2016 Cadillac ATS-V Coupe and with the start of the 2014 LA Auto Show, the full details for the new ATS-V in both coupe and sedan form have been rolled out in California.
Advertisement

We knew that the Cadillac ATS would eventually get the 3.6L twin turbo V6 and a set of V badges, but I was surprised when the 2016 ATS-V coupe leaked last week with 455 horsepower. I wasn’t surprised that GM built an ATS-V, nor was I surprised that GM built a performance version of the ATS with the twin turbo V6, but I am surprised that the new ATS-V Coupe “only” has 455hp after the previous V Series coupe packed 556 horsepower. I fully expected the twin turbo V6 to arrive in an ATS VSport while the ATS-V would come with something north of 500 horsepower under the hood only because the previous CTS-V Coupe had so much more power.

The 2016 Cadillac ATS-V Coupe and Sedan both come standard with the twin turbocharged 3.6L V6 from the CTS VSport, but in the new ATS-V, this mill is slightly more powerful, making 455 horsepower and 445lb-ft of torque. With the help of a limited slip differential, GM claims that the ATS-V will dash from 0 to 60 miles per hour in just 3.9 seconds, but it is unclear whether those times are with the standard 6-speed manual transmission or the optional 8-speed automatic transmission.

Exterior Features of the ATS-V
Whether you order your 2016 Cadillac ATS-V as a coupe or sedan, it will come with a front fascia that has been tweaked to improve air flow into the engine bay and improve downforce, a chiseled hood with an air extractor, uniquely flared fenders to make room for the package specific 18 inch wheels, deep reaching side sills, a subtle rear spoiler and a rear fascia with an integrated diffuser and quad exhaust tips. Of course, these unique features come in addition to the angular LED headlights and the similarly sharp LED taillights.

Those who want an even more aggressive look for the 2016 Cadillac ATS-V can add the Carbon Fiber pack, which includes a new front splitter, a rear diffuser, carbon fiber hood vent trim, rocker extensions and a larger rear spoiler. Finally, those buyers who want the most race-ready ATS-V can pick the Track Package, which adds the Performance Data Recorder and a low weight battery while removing the floor mats and the emergency tire inflator system.

World Class Handling
The 2016 Cadillac ATS-V is designed to compete with the likes of the BMW M3 and BMW M4, so it has to be far more than just a straight line rocket. To achieve world class handling capabilities, GM started with the aerodynamically perfect exterior and added chassis reinforcements that improve rigidity by 25%, the newest version of the Magnetic Ride Control suspension system, a sport tuned steering setup, a monster Brembo brake package with 6 piston calipers up front and 4 piston units out back and Michelin Pilot Super Sport tires wrapped around the lightweight wheels.

The Cadillac ATS has proven itself as one of the best small luxury cars sold in America and with the introduction of the ATS-V Coupe and Sedan, long time segment leaders like the BMW M3 sedan and M4 coupe have their first real challenge from an American automaker in many moons.