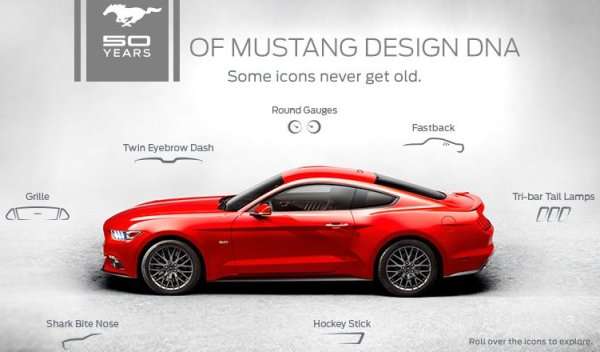 Ford Motor Company has issued a statement and the simple infographic above showing how the 2015 Ford Mustang shares design cues that have not just been found on previous generations of the famed pony car in the past half century.
Advertisement

When the 2015 Ford Mustang debuted with a face that was vastly unlike the previous (2014) Mustang, many fans and critics around the world were quick to cry foul. These folks insisted that the 2015 Mustang didn’t look enough like a Mustang…even though the 2015 model is remarkably similar to the outgoing generation in pretty much every way shy of the headlight design. If you don’t pay any attention to the front end of the new S550 Mustang – and just examine the 2014 model relative to the 2015 model from the front wheels back – the new model is very obviously an evolutionary model from the old model. As for the front end, it is more revolutionary than evolutionary and while that might upset some people, things have to change. After all, if the Mustang looked the exact same for 50 years…it likely wouldn’t have lasted 50 years.

Note: The image above says “Roll over the icons to explore”. That image is just a still, but you can find the full infographic with the included videos at the end of this article.

In addition to the 2015 Ford Mustang looking a great deal like the 2015 Mustang in its basic styling, the new models share some design cues inside and out that have been around since the great American pony car debuted back on April 17th, 1964. While there have obviously been some derivations from these basic styling cues over the past 50 years (several of which came during the Mustang II and Fox Body eras), Ford has managed to include these distinctive features in nearly all of the Mustangs sold since 1964.

First of all, every Ford Mustang made since 1964 has had a longer hood area and a shortened back end – typically with some variation of the fastback design. Across the front end, the forward-angled “shark bite” nose has been found on the Mustang from 1964 through 1978 and while this design vanished with the introduction of the Fox Body Mustang in 1979, it returned with the debut of the S197 Mustang in 2005.

Next, the 2015 Ford Mustang features a prominent central grille opening and that same design was featured from 1964 through 1978, before going to a different design during the Fox Body era(1979-1993). When the SN95 Mustang was introduced for the 1994 model year, we saw the return of the large central grille opening and while it was a big change from the large grille of the 1960s and 1970s, the grille of the Mustang continued to grow from 1994 through 2005 – at which point the big grille opening was back in full effect.

Along the sides, the 2015 Ford Mustang features that gorgeous fastback design that has been a part of every generation Mustang. While some Mustangs were more like coupes than fastbacks – thus leading most people to refer to many models as coupes or notchbacks for the Fox Body generation – the long rear glass has been offered on every generation Mustang. Also along the side, the 2015 Mustang features what Ford calls the “hockey stick”, which is a body line that runs along the bottom of the doors and then swoops up in front of the rear wheels. The Fox Body also didn’t have this feature, but every other generation including the Mustang II has used the hockey stick design on the sides of the car.

On the inside, the 2015 Ford Mustang features a twin “eyebrow” dash design that has been featured in every generation of the Mustang except for the Mustang II and the Fox Body. Below the driver’s side eyebrow sits a gauge cluster with two large, prominent gauges that have been a mainstay of every generation of Mustang since 1964.

Finally, on the back end of the 2015 Mustang was see a stunning set of LED taillights configured in the familiar tri bar design. This three slot design has been used in every generation of the Mustang, although the Mustang II and Fox Mustang used a spread out tri bar design rather than the compact shape found on every other Mustang since 1964.

So, based on that quick rundown, it is clear that the 2015 Ford Mustang does indeed look like Mustangs of years gone by. If anything, the Fox Body Mustangs of 1979-1993 were truly the models that looked the least like the rest of the Mustang generations – and it remains one of the most popular generations in the history of Ford’s fabulous pony car.

jim dowmon wrote on May 29, 2014 - 10:47pm Permalink
two questions , when will a GT350 type model be announced with details and can a stock GT be had with the GT trunk badge delete and 5.0 front fender badges delete possible ?