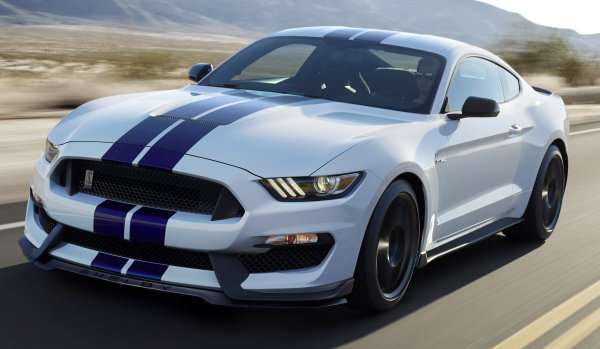 Ford Motor Company introduced the new Shelby GT350 Mustang with a video showing the newest super-Stang racing through a virtual world, but the automaker has also offered up some beautiful rolling footage of the new GT350 from every angle on a road course.
Advertisement

The new Ford Shelby GT350 Mustang looks amazing inside and out, but the most important aspect of the new Shelby Mustang is Ford’s first production application of a flat plane V8 design. As is the case with any new high performance Mustang, how the car sounds is a big part of the allure, so shortly after introducing the new Shelby GT350 in a computer generated video, the Motor Company rolled out the video below that shows the actual car driving in a variety of situations. Click here for an explanation of what makes the flat plane V8 different.

While we don’t get to see any real high performance driving from the new Ford Shelby GT350 Mustang, this video does give us a great chance to see the car in action from every angle. More importantly, there are several points in this new video where we really get a good sample of what the new flat plane V8 will sound like when the driver puts his or her right foot to the floor.

The New Shelby GT350 Mustang on the Road
This first video of the Ford Shelby GT350 Mustang shows the high performance pony car cruising around an unspecified race track. Early on in the video, the new Shelby Mustang is driving along relatively calmly and quietly, and from the vantage point of the car carrying the camera, the exhaust tone of the new GT350 is barely audible at lower RPMs. This is important, as those folks who are going to use the Shelby GT350 as a daily driver may not want it to roar like a race car when they are going 30 miles per hour through their neighborhood. The car still sounds great, but it is fairly quiet – almost subtle – under light throttle.

However, later in the video (about 59 seconds in), the driver of the Ford Shelby GT350 Mustang starts givin’ her a little more throttle, which really wakes up the new 5.2L flat plane V8 engine. Under what I suspect to be mid-level throttle, the tone booming from the quad exhaust tips is a thing of beauty, creating a sound that perfectly fits a car of this performance magnitude. Again, we don’t get to see any wide open throttle action, but this video provides just enough to leave us all wanting for more.
Crank up your speakers and enjoy the first high resolution video of the Ford Shelby GT350 Mustang in action!