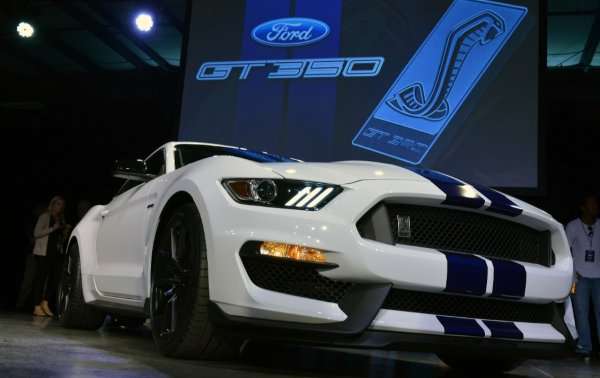 We know now that the Ford Shelby GT350 Mustang will be powered by a new 5.2L flat plane V8, but iI have realized that many people do not understand what makes a flat plane V8 different from any other Mustang engine, I thought that this would be a great time to explain what makes this new Shelby V8 special.
Advertisement

The Ford Shelby GT350 Mustang will very likely be the most track capable Mustang ever and a big part of that success will be the new 5.2L V8 engine. This is the biggest engine in the next generation Mustang lineup, but it is much smaller than the high end engine options found in the likes of the Chevrolet Camaro or Dodge Challenger. However, Ford has been touting the flat plane design of this new 5.2L V8 and while everyone has talked about this design, it has become apparent that some readers don’t understand what makes the flat plane 5.2L V8 different than the 5.0L V8 in the Mustang GT.

Today, I will run through the key differences between the 5.0L V8 with a cross plane design from the Mustang GT and the new 5.2L flat plane engine in the Shelby GT350.

Cross Plane 5.0L V8 Explained
The odds are good that if you have seen the crankshaft from a modern Ford Mustang, you have noticed that it is a very large component, with massive counterweights extending away from the areas where the connector rods attach. This cross plane design is used in every production V8 sold in America today and the reason for this design being so popular is that a cross plane V8 offers a great deal smoother action. The huge counterweights on the crankshaft minimize the primary vibration of the engine while the basic cross plane design – with every cylinder in varying stages of the combustion process – minimizes secondary vibration. This prevents you from feeling the internal engine movement when you are in your car or truck and with so much attention paid to “NVH” (Noise, Vibration and Harshness) levels in new vehicles, the cross plane design is ideal.

The disadvantage to the cross plane V8 design in the 2015 Ford Mustang GT (and every other V8 car and truck in America) is that, while smooth, that counterweight design adds a great deal of rotation mass to the crankshaft. That addition mass actually eats up some power, as the engine has to work harder simply to turn the internal components and that extra effort needed increases the time it takes for the engine to build RPM. The quicker you can build RPM, the quicker you can reach your peak power outputs so compared to a flat plane design, the cross plane 5.0L V8 revs slower and makes a touch less power due to the design of the crankshaft.

Flat Plane 5.2L V8 Explained
The new 5.2L Shelby GT350 Mustang engine uses a flat plane V8 design that has previously been reserved for race cars and very high end exotics. Unlike the cross plane, the flat plane engine doesn’t have the huge counterweights around each connecting rod and that should allow the 5.2L V8 to make more power (since less effort is required to spin the crankshaft) and rev much more quickly, thus allowing you to get into the power band more quickly. The downside to the flat plane design is that the lack of counterweights usually causes increased engine vibration. The design of the flat plane V8 actually minimizes primary vibration on its own, which is why the counterweights are not needed. However, the flat plane V8 design does not have a built in measure to fight secondary balance, so this style of engine generally has more internal vibration.

The reason that flat plane V8s have typically been reserved for race cars and high end exotics, is that race car drivers don’t care about some additional vibration and high end companies like Ferrari can use ultra-lightweight materials to reduce the vibration of the engine. When you are selling a car for $250,000, you can afford to use cutting edge technology to engineer your connecting rods and pistons, but that is a little more of a challenge for affordable cars.

One other advantage of most flat plane V8 engines is that they have a shorter stroke, thus needing less crankcase space. Should this be the case with the new 5.2L Shelby GT350 Mustang engine, the Ford engineers could sit the engine lower to the ground and that would help to reduce weight and lower the car’s center of gravity.

The biggest downside to this design is reduced torque levels through the short engine stroke and with promised figures of at least 500hp and 400lb-ft of torque, the new GT350 does have a lower torque level than expected.

Pros and Cons for the Shelby GT350
The Ford Shelby GT350 Mustang will benefit in a variety of ways from the use of the new 5.2L flat plane V8 and while I have addressed these points above, I thought that it would be good to close by summing it all up.

Pros:
-First and foremost, the flat plane crank weighs less, so the Shelby GT350 Mustang engine will be more efficient in getting its power to the wheels.
-This lightweight crank will allow the 5.2L engine to reach its peak power more quickly while also having a much broader peak power band, which is ideal for road racing.
-The engine will be lighter, thus lowering the overall weight of the new GT350 Mustang and with that weight coming off of the front end, Ford should be able to obtain a better front to rear weight distribution.
-The engine could be smaller, which would allow Ford to position it lower in the engine bay and that would improve handling.

Cons:
-The flat plane V8 engine typically has more engine vibration, but use of high end materials should eliminate much of that. Also, the GT350 should be awesome enough that drivers won’t be worrying about a touch of engine vibration.
-Low torque levels.
-The flat plane design generally costs more to create for a road car, but if the new Ford Shelby GT350 Mustang does prove to be the most track capable Mustang ever – the advantages should be worth the added cost.

Ford has been fairly tight lipped thus far about the new Shelby GT350 Mustang and the flat plane 5.2L V8, but I expect to see a flood of information on this new super-Stang over the next few months. Click here for a detailed look at features that make the new Shelby GT350 the most track capable Mustang ever.