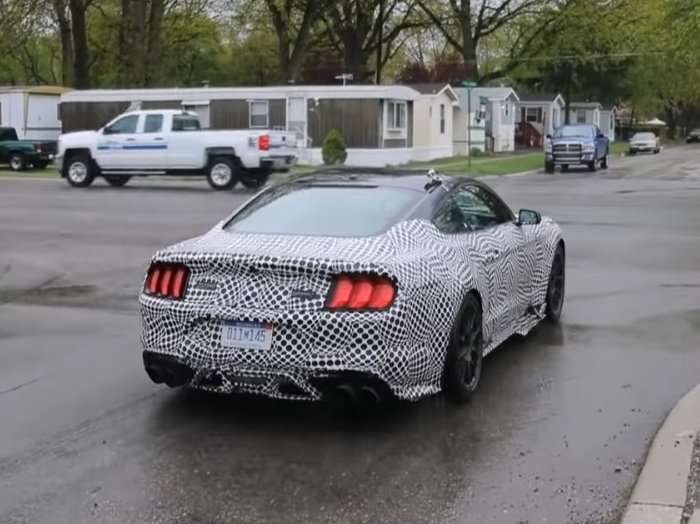 Listen to the Ford Mustang GT500 Accelerate Slowly Through the Gears

A new video showing the upcoming Ford Mustang Shelby GT500 on the move reveals an automatic transmission while giving us a great chance to hear the supercharged V8 operate at low RPM and low speeds.
Advertisement

The video below comes to us from the modern pony car experts at Mustang6g.com and it features new footage of the upcoming Ford Mustang Shelby GT500. In this video, we get to hear the supercharged V8 idle and drive away several times at low speed. The video gives us a chance to hear the new super-Stang exhaust at low RPM, but more importantly, we hear the car shift through the first few gears several times and there is no question that this GT500 is fitted with a self-shifting transmission.

There has long been speculation that the upcoming Ford Mustang GT500 would have an automatic transmission mated to the 700+ horsepower V8, but this video all but confirms that the Motor Company is at least considering a self-shifting gearbox in the new high performance model. We just don’t know which automated gearbox the company will use in the most powerful Ford Mustang ever.

GT500 on the Road
The video above is unusual as spy footage goes, as it begins with the person holding the camera standing next to the new Mustang GT500 on a street in what appears to be a trailer park. After we listen to the car idle for a few seconds, the video jumps ahead to footage of the car driving away from the camera, accelerating slowly through a residential area. At this point, we can hear the quick, smooth shifts that come with an automatic transmission or a dual clutch transmission.

Over and over again, the new Ford Mustang Shelby GT500 accelerates away from stop signs with the camera following close behind. This gives us a great chance to hear the supercharged engine’s exhaust grumble in addition to hearing the car go through the gears several times. In most clips, the Mustang only gets up to third or fourth gear, but it is probably the best footage of the new GT500 in action that we have seen thus far.

While the Mustang isn’t going very fast in this video, it quickly gets up to third or fourth gear. It seems unlikely that the 7-speed in the GT would get through the gears that quickly at low speeds, so is seems more likely that this supercharged muscle car has the 10-speed from the rest of the Mustang lineup.

In any case, this video proves that Ford is at least considering offering the next GT500 with an automatic transmission, hopefully in addition to a 6-speed manual transmission similar to the Tremec unit in the current GT350 and GT350R.

LG's New EV Battery Plant Is a Welcome News for Tesla
Tesla Giga Berlin's New Hurdle: It's Not Only the Gov't, but Now Tesla Itself
END_OF_DOCUMENT_TOKEN_TO_BE_REPLACED