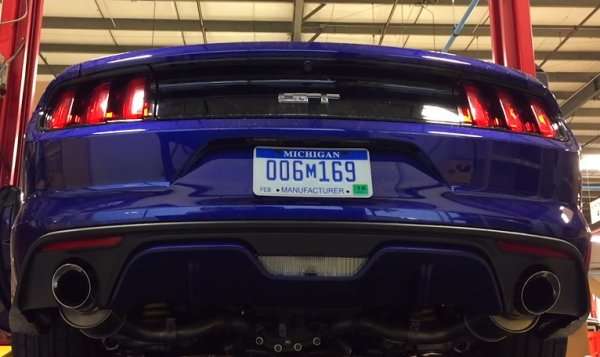 We recently brought you a first look at the Roush version of the 2015 Ford Mustang lineup and today, we offer you a chance to hear the 2015 Mustang GT roar when equipped with the exhaust system that comes with the Roush RS2 Mustang.
Advertisement

I was a little surprised when I learned that the Roush versions of the 2015 Ford Mustang were mostly aesthetic upgrades, but I was glad to hear that the well-known Mustang tuner had included a unique exhaust system on the RS1 Mustang with the 2.3L EcoBoost and the RS2 Mustang with the 5.0L V8. Today, we bring you a short video showing the 2015 Mustang GT with the Roush exhaust system, giving everyone a chance to hear the grumble of the 5.0L V8 at idle and under light load.

"The new quad-tip exhaust is a modular design that is set to accept future upgrades." Says Erin Dmytrow, Engineering Director for ROUSH Performance.

The Roush 2015 Ford Mustang GT Exhaust
The 2015 Ford Mustang GT has a nice rumble to it thanks to the powerful 5.0L V8 tucked under the hood. Even in stock form, the new Mustang GT leaves no question that it is a V8 muscle car. However, some people want more sound from their Mustang across the entire powerband and for those people, Roush is one of the first performance companies on the market to offer an aftermarket exhaust system for the next generation Mustang.

As you can hear in the video below, the Roush exhaust system for the 2015 Ford Mustang GT includes a set of circular exhaust tips that completely fill the factory exhaust cutouts in the rear fascia. More importantly, this Roush exhaust system is clearly louder as soon as the engine starts, but it isn’t quite as radical as some other exhaust systems. When the RPMs come up, the Roush setup gives the 5.0L V8 a nice, healthy bark through the midrange with a powerful burst of sound when you really hammer the throttle. For those 2015 Mustang GT owners who don’t want to wake ALL of the neighbors when they come home late at night, this system could be ideal as it seems pretty subdued at low revs while roaring like a proper muscle car when you get up into the higher RPMs.

If you own a 2015 Ford Mustang GT and you want your brand new muscle car to sound like the one here, contact Roush for more information. In the meantime, crank up your speakers and enjoy!

Click here for more information on the 2015 Roush Mustang lineup!