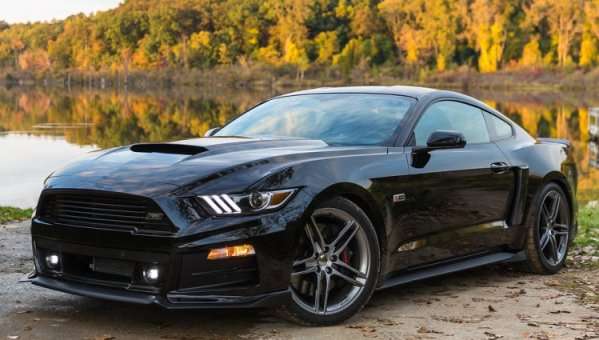 The 2015 Ford Mustang by Roush is All Show, Some Go

Roush has pulled the wraps off of their take on the 2015 Ford Mustang and in addition to a body kit that gives the Roush Mustang a unique, aggressive look that differs quite a bit from the factory issued Mustang in V6, the EcoBoost and the V8 GT form – but these new models don’t come with any additional power compared to the standard issue Ford Mustang.
Advertisement

The 2015 Ford Mustang is the first in quite a few years to have more than two engine options (not including a high end Shelby/SVT model) and it seems that ball of the attention has been paid to the new EcoBoost 4-cylinder model along with the highest powered Mustang GT. The 2015 V6 Mustang hasn’t received anywhere near as much attention as the other two engine packages, but the folks at Roush Performance have a package for every 2015 Mustang while also bringing about a significant refresh to the exterior of the next generation pony car.

The key difference of these first 2015 Ford Mustang Roush Stage kits is that while past Roush Mustangs focused more on performance – these new kits for the next gen Mustang focus predominantly on styling. All of the initial units will be 2015 Mustang fastbacks with manual transmissions, but Roush plans to roll out packages for those Mustangs with automatic transmissions and convertible tops.

The 2015 Roush Mustang
The all-new 2015 Ford Mustang Roush packages will be offered in three forms – RS, RS1 and RS2 – with RS standing for Roush Stage. RS comes with the entry level 3.7L V6, RS1 comes with the new turbocharged 2.3L EcoBoost 4-cylinder and the RS2 comes with the 5.0L V8 of the Mustang GT.

"The new quad-tip exhaust is a modular design that is set to accept future upgrades." Says Erin Dmytrow, Engineering Director for ROUSH Performance. "We are working on some exciting features that will be available later this year."

There are no real performance features with the 2015 Ford Mustang Roush Stage kits, but buyers can opt for some features like suspension and braking components upgrades that will enhance handling. I would also expect some simple power-adding modifications such as intake setups and performance engine calibrations soon. Technically, some might call this Roush package "All Show, No Go", but that wouldn't be fair to be standard performance capabilities of the 2015 Mustang - hence my wording in the title.

A Roushcharged Model in the Future
Those familiar with the past Roush tuned Ford Mustangs know that one of the key features of many Roush Mustangs is the supercharged setup bearing the tuner’s name. The “Roushcharger” has spent the past few years helping the Mustang GT offer big power and while we would expect the same with the 2015 Mustang – it is impossible to ignore the lack of a supercharged model in the new Roush Mustang lineup.

Also, the press release from Roush specified that the RS2 Mustang “will showcase a naturally aspirated 5.0L V8.” The fact that Roush made a point to say that this first 2015 Roush Mustang was naturally aspirated leads me to believe that in the future, we will see something that is not naturally aspirated. Based on that, I would fully expect to see a higher end model – possibly a Roush RS3 Mustang – packing a supercharged 5.0L V8 and some very big power. Also, I would be surprised if we don’t see an even more heavily modified version of the Roush RS1 EcoBoost model with more boost and more performance at some point…even if it is only an upgrade package for the RS1 kit.

Pricing has not yet been announced for the 2015 Roush Mustang, but we can expect pricing to surface later this month when the uniquely styled pony cars begin hitting dealerships around the country.

This images above show the 2015 Ford Mustang Roush RS2. Click any of the thumbnails for a closer look.