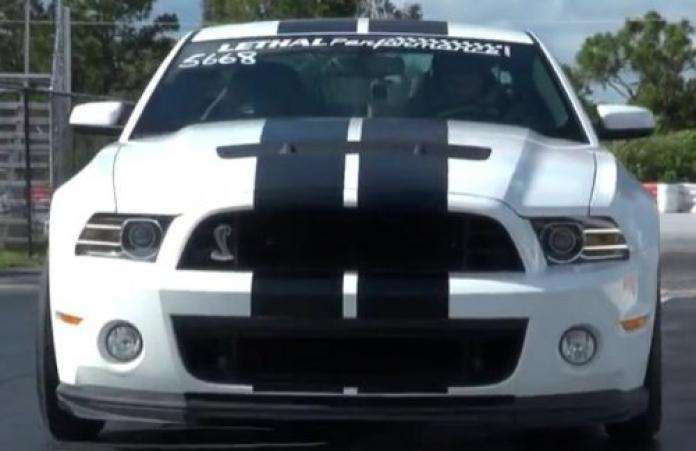 The Mustang tuning experts at Lethal Performance took their 2013 Shelby GT500 to the dragstrip of Palm Beach International Raceway with the hopes of getting into the 9-second range and the result – a stunning 9.77 second quarter mile time with a trap speed of 148.8 miles per hour.
Advertisement

The talk of the performance world last month was the team of Evolution Performance when they were the first tuning shop to break into the 9-second range with the 2013 Ford Shelby GT500 Mustang but after the video below debuted this weekend - it is Lethal Performance who appears to be the top dog in the Mustang tuning shop world. Their 9.77 at 148.8 miles per hour bests the time turned in by the Evolution Performance GT500 last month of 9.95 at 142 miles per hour. Unfortunately, as was the case with the Evolution Performance Mustang that dipped into the 9-second range – the full details of this 9.77 run are being withheld for publishing in an upcoming issue of 5.0 Mustang & Super Ford Magazine.

While the folks from Lethal Performance are understandably tight-lipped about the modification list of their 9-second 2013 GT500 (as were the people at Evolution Performance), the few bits of advice offered by both groups give us a very rough idea as to what might be done to these super muscle cars.

First off, the Evolution Performance 2013 GT500 Mustang that ran a 9.95 claimed to have been powered by the stock engine, the stock supercharger, the stock 6-speed manual transmission and the stock clutch…with only “basic bolt ons” used to get into the high 9-second range. Basic bolt-ons generally mean that the car has some sort of enhanced air intake system, a better flowing exhaust system, perhaps higher ratio gearing in the rear end, fuel system upgrades and an engine computer tune that allows the GT500 to make the most of these modifications. The Evolution video does not mention stock cylinder heads so perhaps those have been altered in some way but only time will tell.

The Lethal Performance video showing their 2013 Ford Shelby GT500 Mustang running a 9.77 quarter mile run offers even less information but there are a few interesting parties listed in the “special thanks” portion of the video. These people included Power By The Hour, UPR Products, Lund Racing, Wilson/Nitrous Pro Flow and Jeremy Martorella. For those unfamiliar with some of those names, Jeremy Martorella is with UPR Products; a company who makes high performance suspension components for the GT500. I am guessing that Mr. Martorella was behind the wheel of the 9 second Lethal Performance GT500 and that the car featured some suspension goodies from these go-fast experts. Among those other company names, Lund Racing is a top tuning company for the GT500 (having gained 50 horsepower with only tuning) so they may have offered some advice there while Power By The Hour is a dyno specialist shop – who may have also worked with Lethal on the 9.77 second tune. Finally, there is Wilson/Nitrous Pro Flow who we can assume either provided a nitrous injection setup or possibly an intercooler spray system that helped keep engine temps down while building more power.

In any case, the folks at Lethal Performance are now the top dogs in terms of offering a build package for the 2013 Ford Shelby GT500 for those buyers who want to go drag racing – and run very fast with what we assume are only minor modifications. Check out the video below of the Lethal Performance GT500 in action and make sure that your speakers are cranked up because this blown Pony sounds just as awesome as it runs.

Image captured from the video above.

Anonymous wrote on July 16, 2012 - 9:59pm Permalink
wow i say by the time the nmra rolls into bowlingreen this year this monster will be in the 8's these guys have been building and racing 2500+hp 10.5 outlaw mustangs for years so this gt500 is a play toy to them.[ to bad the zlnone is slower but faster because of its smooth easy ride]