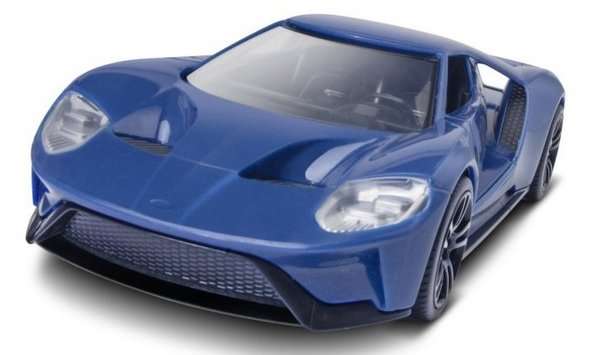 Ford Motor Company has teamed up with Revell to offer up free Ford GT supercar model kits to kids at the 2016 North American International Auto Show in Detroit’s Cobo Hall – marking the third straight year where little gearheads can score a free toy from Ford.
Advertisement

Ford Motor Company routinely has one of the more impressive displays at the North American International Auto Show in Detroit and when the 2016 Motor City show kicks off, Ford will once again offer attractions for show-goers young and old, including a free model kit of the new Ford GT supercar for kids.

Revell and Ford Attract Kids, Collectors
Ford Motor Company will use the 2016 Detroit Auto Show to showcase a long list of high performance vehicles, but none are as powerful as the new Ford GT supercar. The Ford GT is one of those cars that most people will only ever dream of owning and, as is the case with cars like the Dodge Viper, the Corvette Z06 or pretty much any Ferrari, production of the Ford GT will lead to a great many toys and collectables – giving these dreamers a chance to own the GT, even if only in small scale.

Ford has teamed up with plastic model kit company Revell to offer up the first 2017 GT “toy”, with this simple snap-together model having 14 individual pieces which fit together neatly to create what will likely be the best performing Ford performance car of all time.

This is the third time that Ford and Revell will offer up free model kits to kids at the Detroit Auto Show, with the Mustang GT being the featured vehicle in 2014 while the SVT Raptor F150 was the 2015 kit.

Those folks who love the look of the Revell Ford GT kit shown above, but who will not make it to the 2016 North American International Auto Show in Detroit, will be able to buy a similar kit starting in April. That kit will be a bit more elaborate, with 28 pieces and a retail price of $14.99.

Why Attract Kids?
I am sure that plenty of older auto show attendees wonder why anyone who cannot drive would come to an auto show and more so, why any automaker would want to attract kids to their display.

First, the next generation of automotive enthusiasts are the kids coming to the 2016 Detroit Auto Show with their parents. I fondly remember going to the local auto show when I was a little kid growing up in Pittsburgh and I know many Detroit locals who take their kids to the show to begin teaching them about the industry at a young age. That aspect only has so much impact on Ford Motor Company, as some kids will learn to love different brands as they get older, but for every automaker – keeping people in the display area means more attention for them and less attention for the competition.

Say that a dad takes his 10yo son to the 2016 Detroit Auto Show. They wander from section to section, with the dad snapping pictures of his son in cool cars and trucks along the way. When they get to the Ford display, there are some awesome cars and trucks to have the son check out in person, but there is also the opportunity to build a new Ford GT model kit. The father and son spend more time in the Ford area because of it, building memories while building a toy for the son…or a collectable for dad.

The fact that Ford offers some hands-on fun in their section allows them to draw more show-goers and to keep them there longer, giving the parents more time to check out the latest Ford vehicles while creating an early positive reputation with a future driver.

bpw wrote on December 29, 2015 - 11:44pm Permalink
How cool is that! Give a kid a model kit of a dream car and you've planted a seed to get a Ford enthusiast for life, and made for some sweet memories. Well played, Ford!