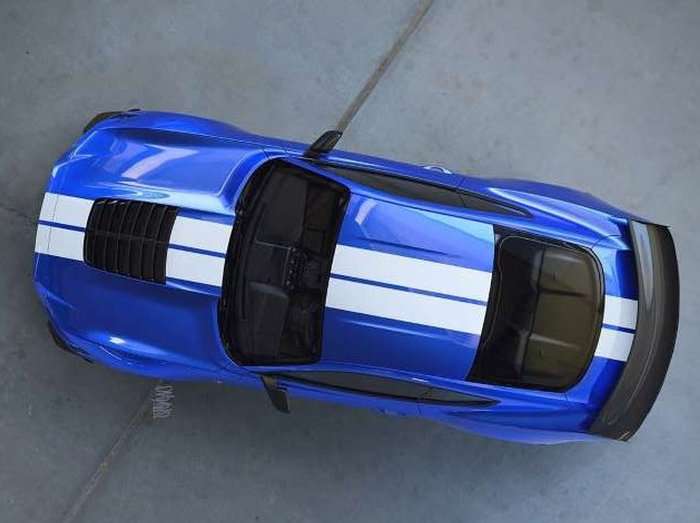 The folks at Mustang6g are typically on top of everything relating to the current generation of the Ford Mustang and most recently, they uncovered a computer screenshot containing all sorts of information on the upcoming 2020 Shelby GT500, but there are enough questionable points on the screenshot to lead some people to question the legitimacy of the information.
Advertisement

Before getting into the numbers discussed in what appears to be a leaked internal Ford document detailing the 2020 Mustang Shelby GT500, I should point out that there are some glaring issues that make some people immediately discredit the information. For example, “petrol” is spelled “patrol” and it seems odd that this internal computer system would have a category error like that. This car also seems to be fairly heavy, with a curb weight of 4,225 pounds while the current Mustang GT weighs under 3,900 pounds, so if this is accurate, the new GT500 is nearly 400 pounds heavier than a loaded 2018 Mustang GT. It seems possible, but not likely, and coupled with the spelling error, some people are quick to debunk all of the information included in the screenshot.

Frankly, I am skeptical of it as well, but with the possibility of it being real – especially with the success that Mustang6g.com has had in unearthing key Mustang information ahead of time – I am inclined to at least discuss this information.

Power
According to the screenshot posted on the Mustang enthusiasts’ website, the 2020 Ford Mustang Shelby GT500 will be powered by a 5.2-liter, supercharged V8 with 720 horsepower and 650 lb-ft of torque. That peak horsepower is listed as coming at 7,500 RPM, which is also listed as the redline for the engine, so there is one more piece of questionable data. The torque peak is at a far-more-reasonable 4,500 RPM.

While the peak horsepower engine speed is questionable, those power figures support many of the rumors floating around the internet. 720 has long been the popularly-discussed number among those speculators who aren’t hung up on the supposed hint of 772 horsepower in one of the company’s dashboard images of the newest Mustang GT.

That power is sent to the rear wheels by means of a new carbon fiber driveshaft and a set of 3.73 gears, but there is no mention of the transmission. With a 3.73 gear, it would almost have to be a 6-speed manual transmission, as the Hellcat cars with the 8-speed automatic come with a 2.62 gear, so it seems highly unlikely that the 10-speed GT500 would have a stock 3.73 gear.

According to the screenshot, this power and this gearing will afford the GT500 a top speed of 190 miles per hour. While that may seem low, if this does pertain to a 6-speed manual car, we are likely to see a higher top speed from a car with the automatic transmission.

Curb Weight
If this information proves to be accurate, the 2020 Ford Mustang Shelby GT500 will have a curb weight of 4,225 pounds. For comparison, the current Mustang GT fastback has a curb weight that varies from just over 3,700 pounds to roughly 3,850 pounds, so the car described in the screenshot is roughly 400 pounds heavier than the Mustang GT. The current Shelby GT350 only weighs 3,660 pounds, so at 4,225, the GT500 would be nearly 600 pounds heavier than the GT350, but in looking at what the package could include – that number may be possible.

The GT500 has traditionally come pretty heavily loaded and that is likely to continue for 2020. The Camaro ZL1 and Hellcat Challenger (for the first few model years) only came loaded up, so the Shelby Mustang described in that screenshot could be a loaded, supercharged Mustang. If this car has heated and cooled power, leather front seats, a premium infotainment system with 8-10 speakers, big, wide wheels and tires, big brakes and a beefed-up drivetrain, it could most certainly pick up some weight over the Mustang GT. There is also the belief that the next Shelby will have a wider body, so there could be more weight added there as well.

More importantly, there is no question that adding a supercharger system will add a considerable amount of weight. A supercharger and all of the components that go with it, including the cooling system upgrades, add quite a bit of weight. They don’t weight 400 pounds, but when you add in the heavier seats, the heavier sound system, bigger wheels and tires, bigger brakes and a heavier body than what comes on the Mustang GT – it is feasible that the GT500 could have a curb weight of 4,225 pounds.

Again, I am skeptical due to how much heavier than is than the other current Mustangs, but with all of those additions, it is possible.