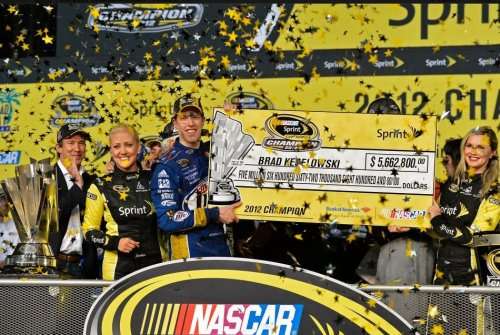 Here at TorqueNews, we don’t closely follow the ranks of NASCAR but after reporting in mid August that Dodge would be pulling their factory backing from the series after 2012, it would only seem fitting that we also report that the brand went out with a bang thanks to Brad Keselowski claiming the 2012 NASCAR Sprint Cup title last night in his Dodge Charger.
Advertisement

Brad Keselowski and the #2 Miller Lite team came into yesterday’s Ford EcoBoost 400 with a 20 point lead over second place Jimmie Johnson in the #48 Lowe’s Chevrolet Impala. This lead meant that Keselowski and his Dodge Charger controlled their own destiny - having to finish just 15th or better to mathematically clinch the 2012 NASCAR Sprint Cup title while Johnson would have to win the race and hope that Keselowski struggled.

Keselowski got the jump on Johnson, qualifying 3rd in the Miller Lite Dodge Charger to Johnson’s 1th place start. However, once the race got underway the two championship contenders found themselves jockeying for position in the top 10 about 40 laps into the race. Through the middle stretch of the race, Johnson moved forward in the field, managing to lead a lap and running in the top 5 while Keselowski drifted back a bit – while remaining in the top 15 until lap 206 when he reported to his pit crew that he had run out of gas. This forced Keselowski back into the 24th spot while Johnson took over the lead. At this point, it seemed like Keselowski’s Cinderella like run for NASCAR’s biggest prize was slipping out of reach but Lady Luck was about to smile on the #2 Dodge Charger.

Around lap 213, Jimmie Johnson took his #48 Lowe’s Chevy into the pits for a routine pit stop but one of the crew members failed to get all of the lugnuts tight before Johnson went tearing back into the track. This forced the Lowe’s Chevy to make another pit stop the next time around and this unplanned pit stop to make sure that the lugnuts were secure pushed him back to the 25th spot, one lap down with just 52 laps left in the race and the season. During this same time, Brad Keselowski worked his way up to the 7th position while Johnson worked to try to get back on the lead lap. However, that came to a stop when the #48 Impala slowed on the track during lap 226 and after a short pit stop, Johnson’s was pushed back to the garage area. The issue was later announced to have been a rear differential issue – one which forced him to finish a dismal 36th in a race where a win could have meant yet another championship. To make matters worse for Johnson, the poor finish at the season’s final race caused him to drop into the third spot in the overall standings at Clint Bowyer took the second spot by just 1 point.

For the #48 Lowe’s Chevrolet Impala and Jimmie Johnson, their championship run for the 2012 NASCAR season ended with the car sitting on jack stands while the rest of the field continued on. This mechanical failure guaranteed that Brad Keselowski would indeed win the Sprint Cup championship but to add that extra bit of flare, the #2 Charger finished in the 15th spot – exactly where he had to finish in order to clinch the title had Johnson still been in the running. Keselowski could have finished 35th and still clinched the 2012 Sprint Cup but even if Johnson had held on to win the race, “BK” and his #2 Dodge Charger finished where they had to finish to win the championship.

For Brad Keselowski, this is his first NASCAR championship in just his third full year on the circuit. Keselowski tied with Johnson and Denny Hamlin for the most wins with 5 a piece although BK won his five races without sitting on the pole position at all in the past year. Along with the big trophy and the title, the 28 year old Keselowski took home a very big check for $5,662,800.

Dodge claims the championship in their final year
Yesterday marked a monumental day for young driver Brad Keselowski but for many hardcore NASCAR fans, the bigger story focused around the Dodge brand leaving NASCAR after rejoining just 10 years ago. While there have always been far fewer Dodge Chargers in the Sprint Cup field than any other vehicle, the Dodge race program always had at least one driver/team that helped put a Chrysler-powered stock car in the top ten. However, with the news earlier this year that Penske Racing would be shifting from Dodge to Ford in 2013, Dodge was left with no major teams running their products so the Chrysler Group made the call to bring an end to the program – instead devoting that money to other projects like the NHRA (where they claimed two championship titles this year) and the growing Global RallyCross circuit.

Yesterday was a sad day for the hoards of faithful Mopar fans around the country, many of whom supported the Dodge brand in NASCAR when it one it’s last championship back in 1975 with help from Richard ‘The King’ Petty. As an active member of the Dodge enthusiast community, it was exciting news when Dodge returned to NASCAR for 2002 but with an inability to secure top teams, it did not come as a shock to see the Chrysler Group once again depart from NASCAR.

This planned departure from NASCAR by the factory backed Dodge racing program was bad news for the fans but there is no question that there is no better way to leave the NASCAR Sprint Cup ranks than with a championship. Dodge might be gone from NASCAR but they went out on top – leaving their mark in the championship column – marking the first time that a non-General Motors driver has won NASCAR’s biggest title since 2004.

Dodge is gone from NASCAR…but they went out as champions. Congratulations to Brad Keselowski and the team behind his #2 Miller Lite Dodge Charger on their 2012 NASCAR Sprint Cup championship.