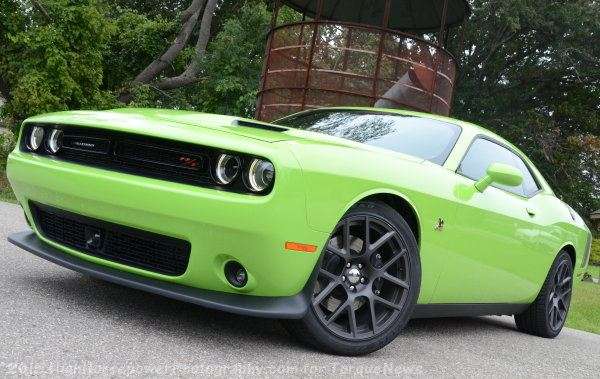 The folks from Hot Rod recently took the 2015 Dodge Challenger SRT Hellcat to the Kenne Bell Performance dyno facility in Rancho Cucamonga, California and during the piece detailing that dyno testing, Hot Rod mentioned that Kenne Bell is working on a Hellcat-like supercharger system for the 2015 Challenger Scat Pack that will lift the output to 901 horsepower.
Advertisement

The 2015 Dodge Challenger SRT Hellcat is the most powerful production muscle car of all time, with 707 horsepower from a supercharger 6.2L Hemi V8, but for those who cannot pony up the $60k+ price tag of the Hellcat model, the 2015 Challenger R/T Scat Pack offers impressive performance for under $40k. In fact, with 485 horsepower and 475lb-ft of torque offered by the naturally aspired 6.4L Hemi makes it more powerful than any of the competitors’ vehicles, shy of the high priced Camaro Z28 and ZL1. The Scat Pack is a great option for those who want something a little more budget friendly than the Hellcat, but that huge power differential could prove to be a problem for some.

Fortunately, the folks the Kenne Bell Performance are working on a supercharger package that could lift the output from 485 to 901 horsepower. That is 901 horsepower, according to the folks at Hot Rod.

Kenne Bell Hellcat Blower Package
There are plenty of people who doubt that the 2015 Dodge Challenger SRT Hellcat actually makes 707 horsepower, so the folks from Hot Rod took the most powerful muscle car ever to the Kenne Bell Performance facility for some proper dyno testing. During that testing, Hot Rod found that the Hellcat Challenger’s advertised 707hp and 650lb-ft of torque translates to 620 horsepower and 579lb-ft of torque at the rear wheels. That represents a power loss of about 12% for the Hellcat when compared to the advertised figures and all of these numbers are very impressive.

However, amidst the piece detailing their dyno testing for the Hellcat Challenger, Hot Rod mentioned that Kenne Bell is working on a 4.2L Hellcat style supercharger for the 392 cubic inch Hemi in the R/T Scat Pack and the SRT 392 Challengers. According to Hot Rod, this 4.2L supercharger package from Kenne Bell will lift the output of the 392 Challenger up to 901 horsepower.

How KB Will Hit 901
Considering that the mighty Hellcat Hemi “only” produces 707 horsepower, it might seem hard to imagine a 392 Hemi churning out 901 horsepower, but there are a few things to consider. First, the IHI top-mounted supercharger on the Hellcat Hemi is a 2.4L design, whereas the Kenne Bell blower is expected to be around 4.2L. That extra air volume will allow the engine to take in more air and more fuel, and with more air and fuel comes more power. Also, the Hellcat Hemi is only 6.2 liters, while the 392 is 6.4 liters, to the extra bit of engine volume will allow Kenne Bell to squeeze out a few more ponies.

Finally, and most importantly, we should keep in mind that when the SRT engineers designed the Hellcat Hemi, they had to make sure that it reached certain fuel economy and emission requirements. If Chrysler didn’t have to put any concern into efficiency, they could have most certainly built the Hellcat Hemi to make far more than 707hp. Luckily, the folks from Kenne Bell don’t have to worry about that, so provided that they can pass California emission tests, they can get as crazy as they want with tuning.

When you add in a bigger supercharger, a bigger engine and far fewer restrictions, Kenne Bell shouldn’t have any problem making more than 707hp – although 901 still seems extreme to me.

In addition to the 4.2L blower, I would imagine that the Kenne Bell 901hp package for the 2015 Challenger R/T Scat Pack will come with fuel system upgrades and possibly some other engine components to improve durability and longevity.

Hellcat Killer for Under $50k
The most intriguing aspect of the Hellcat-like blower package from Kenne Bell (after the 901hp) is the price. According to Hot Rod, this package will only cost around $7000, so if you bought a 2015 Challenger R/T Scat Pack for around $40,000, adding the $7,000 KB blower package and a good set of sticky rear tires will have you spending under $50,000 for a car with almost 200 more horsepower than the Hellcat Challenger. Of course, that doesn’t include any of the other aspects of the SRT package, but for those looking to go drag racing – the Kenne Bell blown Scat Pack could be the new King of the Hill.