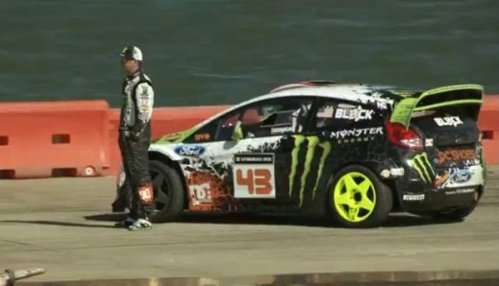 Today, Ken Block and the people at DC Shoes unveiled a short teaser of the upcoming Gymkhana 5 featuring a quick glimpse at the hoonage that will be included in the fifth installation of Ken’s amazing driving gymkhana videos ahead of the July 9th debut of the entire video.
Advertisement

There are few individuals who are best known for making videos destined for YouTube but with over 140 million views, Ken Block and his DC Shoes/Monster rally cars are among the most popular YouTube pairings that don’t involve hot, drunk girls doing tantalizing things. Of course, Ken Block has also made his imprint on the sanctioned racing world including rally racing around the world, the X Games and the Global RallyCross tour but his Gymkhana videos have had a major hand in making Mr. Block so popular in the motoring world.

Gymkhana 5 features Ken Block and his #43 DC Shoes/Monster World Rally Team Hybrid Function Hoon Vehcle (H.F.H.V.) Ford Fiesta but unlike Gymkhana 4, which took place over the course of a massive, elaborate course set up in Universal Studios, Gymkhana 5 seems to take place on a barge floating in the San Francisco Bay. Some have suggested that Gymkhana 5 will take place strictly on this comparatively small barge and while it will be incredible to see Ken back in action – destroying tires in his 600+ horsepower all wheel drive Ford Fiesta – I have to wonder how keeping Ken contained in such a small area will impact his ability to let it all hang out. Based on that, I somewhat expect to see the video include some barge time along with some non-barge time but the Gymkhana series is all about being amazing and a 4 minute video of Ken doing donuts, drifts, spins and jumps on a barge will be a sight to behold.

Unfortunately, all that we have to go on right now is the short teaser of Gymkhana 5 shown below which offers just a 37 second preview of what is to come…and of that 37 seconds, only about 10 seconds of it shows Ken and his H.F.H.V in action. For the rest of the Gymkhana awesomeness, we will have to wait until the full video makes its YouTube debut on Monday July 9th but based on Ken Block’s work over the past four editions of the Gymkhana series – I expect the video to be well worth the fairly short wait.

What we do get to see in the 37 second video below is Ken Block and his #43 DC Shoes/Monster Ford Fiesta rally car doing plenty of rich, smokey donuts on a barge out in the middle of the San Francisco Bay as it nears the Golden Gate Bridge…all to the tune of Europe’s “The Final Countdown”. Hopefully this music selection isn’t some indication that the Gymkhana series is coming to an end as Ken Block’s raucous YouTube videos have done a great deal to attract new American fans to the rally world.

I have been lucky enough to go for a couple rides with Ken Block in his Ford Fiesta rally cars and I can attest that riding with Ken during a short Gymkhana practice session is easily one of the most exhilarating automotive experiences of my entire life. Since the first time I strapped myself into the passenger seat of one of Ken Block’s rally cars and felt the brutal, intense acceleration of the car in front of thousands of screaming spectators, I have been hooked on the rally world and his Gymkhana videos. With any luck, Gymkhana 5 will be just another in a long list of awesome hoonage videos to come.

July 9th brings about the introduction of the Gymkhana 5 video and you can be sure that we will be talking about it that Monday around the company water cooler.

Elon Makes a Cybertruck Statement With an Action, But Quiet in Words
Tesla's Record Month in China: Doubled Registrations in March 2021
END_OF_DOCUMENT_TOKEN_TO_BE_REPLACED