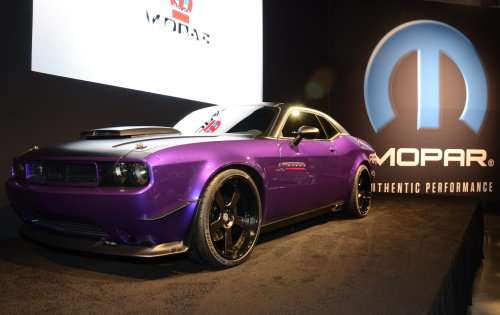 A couple weeks ago we brought you a preview video discussing the joint project between ventriloquist Jeff Dunham and Chrysler’s Mopar division but at this week’s SEMA Show in Las Vegas – show goers got a chance to check out the heavily modified Dodge Challenger dubbed Project UltraViolet in person.
Advertisement

When Jeff Dunham first teased Project Ultraviolet a few weeks ago in a short YouTube video, little was known about this customized Mopar muscle car shy of the fact that it was based on a Dodge Challenger SRT8 and that it would probably be finished in Plum Crazy. Project UltraViolet is indeed painted Plum Crazy (with a black roof) but Mopar, Dunham and Palmer’s Customs went well beyond just painting up a standard Challenger SRT8 with a list of modifications that is best summed up by Mopar’s explanation that “changes and details on the customized Challenger are extensive”.

"The guys worked tirelessly night and day in a very short six-week window, and completion took right up to a couple of days before this reveal at SEMA," Dunham added. "We've done the dyno work, but nothing actually on the track yet. After we get her back home, this is one I'm looking forward to sticking my foot into... and will likely be included in the third and final webisode."

First off, the standard 392 cubic inch Hemi V8 was ripped out in favor of a 426 cubic inch Hemi crate engine that sends 515 horsepower and 490lb-ft of torque to the rear wheels via a 6-speed manual transmission. A Mopar cold air intake feeds the big Hemi while a custom prototype side exit exhaust system lets Project UltraViolet breathe while also providing a throaty roar.

Next, the build team took to the interior of Dunham’s new Dodge Challenger SRT8 where a full grain Nappa leather package has been added with color coded accent panels and premium stitching throughout. The front seats are custom designed by the folks at Lear and a Hurst short throw shifter adds some old school muscle car feel.

Finally and most significantly, the exterior of the Project UltraViolet Dodge Challenger SRT8 has been massively altered beginning with a set of matte and semigloss black 22 inch HRE wheels wrapped in high performance Pirelli rubber. Next, Palmer’s Customs added front and rear wheel opening flares that extend out over the wide performance tires while also giving the car a stance that is a stunning 4 inches wider than the standard Challenger SRT8. The front and rear fascias have been modified to allow for a proper flow with the new, widened body while one-off parts including a rear diffuser, front dive planes, front splitter, rocker sills including the unique custom exhaust tips, rear spoiler, lower rear fascia and the grille have been altered for a truly unique look. A Mopar suspension package allows Project UltraViolet to sit about an inch lower than stock while also bolstering the aggressive stance of Dunham’s custom Challenger SRT8. Once the body was finished, Palmer’s Customs painted the majority of the car the deep metallic color best known to Mopar lovers as Plum Crazy with matte black on the roof, the rear spoiler and around the bottom edges of the body (front fascia, rear fascia, side sills, rear splitter).

The result of the modifications made to Jeff Dunham’s Dodge Challenger SRT8 dubbed Project UltraViolet is a modern Mopar muscle car that looks great but does so in a very subtle way. Unlike some Mopar project Challengers that sport wild designs that can be a bit outlandish (like the Rich Evans Challenger from SEMA 2010), Project UltraViolet has a unique, menacing look that is cleaner and less pronounced – making it all the more awesome.

"It was great to work closely with Jeff and create a remarkable, one-of-a-kind 2012 Moparized Dodge Challenger SRT8," Trostle said of Project UltraViolet, which takes its name from the two-tone paint scheme chosen for the Dodge Challenger that combines an 'ultra'-violet body color with a black upper half. "The project shows the possibilities of what customers can do to customize and modify our vehicles with more than 150 quality-tested performance Mopar parts and accessories for the Dodge Challenger."

Jeff Dunham’s Project UltraViolet looks fantastic and with 515 horsepower, it should perform every bit as great as it looks. This car will undoubtedly make for a great companion in Dunham’s garage for his numbers-matching 1970 Plymouth Hemicuda Convertible that is also Plum Crazy.

Check out the gallery of the Project UltraViolet Dodge Challenger SRT8 on the right side by clicking any of the thumbnails.