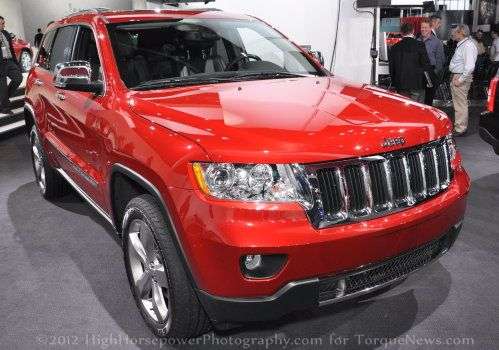 The National Highway Traffic Safety Administration has launched a preliminary investigation into the 2012 Jeep Grand Cherokee over a concern that the power steering system may leak flammable fluid onto hot components in the engine bay – with very dangerous results.
Advertisement

The NHTSA has launched a preliminary investigation into the power steering system of the 2012 Jeep Grand Cherokee after receiving three complaints from owners – two of which results in an engine bay fire and another that resulted in total loss of power steering assist. All three of these reports have occurred in the past two months with the most significant incident coming on June 13th, when a brand new Jeep Grand Cherokee with just 35 miles on the ticker was completely destroyed by a fire that began under the hood.

According to the owner/driver, this 2012 Jeep Grand Cherokee was traveling down the road at roughly 50 miles per hour when they noticed smoke in the rear view mirror as well as in the side mirrors. The driver immediately pulled the Grand Cherokee to the side of the road and as they climbed out of the vehicle, massive flames began pouring coming from under the hood. A second fire in the engine compartment of a 2012 Jeep Grand Cherokee did not result in a total loss of the vehicle but the owner stated that he had noticed power steering fluid in his driveway prior to the vehicle catching fire. You have to wonder why he waited to report it until after the vehicle caught fire as, if it was my brand new SUV, I would have had it back at the dealership in a heartbeat.

Anyways, a third complaint since May indicated that a 2012 Jeep Grand Cherokee began leaking power steering fluid and after a short time, the vehicle lost all power steering assist. While this is nowhere near as severe as a fire in the engine bay, losing power steering in the right conditions can certainly increase the chances of an accident.

Power steering fluid is flammable and the power steering system in the 2012 Jeep Grand Cherokee is under pressure, relying on a system of hoses to move the fluid to and from the steering rack assembly and the steering pump. The NHTSA believes that one of those hoses could be at fault for these fires and if the feds find a faulty hose – they could instruct Chrysler to issue a recall to change the hose in question. That is a fairly easy fix (should that be the case) but recalls are costly regardless of how easy they are – both in financial terms and in terms of a hit to the popularity and reputation of the vehicle. Luckily, the Jeep Grand Cherokee is one of the bestselling sport utility vehicles in the history of the American auto industry so, provided that these fire issues do not become more common, this could be an issue that Chrysler addresses quickly and moves on. Of course, that is all depending on the findings of the NHTSA.

The National Highway Traffic Safety Administration could take a few months to decide whether to progress to the next level in their investigation, which would be an engineering analysis. That is often the final step before a recall is ordered but often, these investigations can end with no fault found with the vehicles in question. This investigation includes 106,803 vehicles but further analysis of the problem could narrow that number if specific factors are to be found with certain drivetrain features (V6, V8, etc).

Should the NHTSA find that there is a problem worthy of requiring a recall, it will be interesting to see if other model years or perhaps the Dodge Durango is also included in that recall. The Durango is mechanically identical to the Grand Cherokee so it would make sense that a problem with the Jeep would also be a problem with the Durango. However, those fire reports have only included Jeep models so perhaps (and hopefully, for Chrysler), any problems found are specific to a single model.

Isavel Lopez wrote on July 4, 2015 - 1:06pm Permalink
We currently leased a 2012 Jeep Grand Cherokee and have had it for 4 months. We took it into the Jeep dealership for an oil change and were told that our power steering fluid was completely empty and that it was leaking. With all the complaints and a few cars catching on fire, not to mention the cost of fixing the issue, what is the NHTSA doing about getting a recall mandated on this specific issue?? Peoples lives and safety are at stake! This isn't a regular oil leak, it affects stearing and with speeds up to 75mph on some of our freeways the effects could be devastating!
pilar martin wrote on September 6, 2015 - 8:42pm Permalink
Last Saturday I took my daughter to singing lessons at the city and notice the power steering loose after dropping her off I drove around a roundabout and thats it the car would not go straight the power steering got jammed and couldn't use the jeep. Nrma had to towed as seems the power steering is completely gone!
I.LOFTON wrote on March 29, 2016 - 5:00pm Permalink
My 2012 Grand Cherokee,has only 26,700 miles and while getting an oil change I was informed of an rack and pinion leak.Wish I had known of this before purchase.
P Dusselaar wrote on December 16, 2016 - 2:36am Permalink
We have had our Grand Cherokee since new and put it in for a service when we saw oil on the driveway. We were then informed there was a power steer leak which needed to be fixed. Could be the cooler. Needs more investigation.
Kevin wrote on December 21, 2016 - 6:37am Permalink
Took my 2015 Jeep in for an oil change and the guys told me to have the rack inspected. Sure enough, power steering unit was leaking and the dealer replaced it under warranty. The car only has 32k miles! What the heck is the power steering doing failing already?!?
Nelson wrote on October 17, 2017 - 7:38pm Permalink
I have a 2012 Jeep Grand Cherokee I bought certified preowned and keep it serviced regularly, but didn't notice anything with the power steering until my last oil change, I asked the dealer to inspect the whining noise coming from my steering. After I inquired about it once the oil change was done they kind of brushed me off saying yeah the fluid was a little low and it could be air in the lines, but now it only been two weeks and it low on fluid again and after reading this notice I'm very concerned
Jerry cooksey wrote on December 7, 2017 - 7:07pm Permalink
Severe Power Steering Fluid Leak 2012 Jeep Grand Cherokee Laredo 3.6 Engine Unable To Locate Where Leak Is Retired Fire Chief.
Anne wrote on March 2, 2019 - 2:17pm Permalink
Hello Jerry, I am contacting you because I am having the same problem with my 2012 Jeep Grand Cherokee Laredo 3.6 I usually take my vehicle into the dealership for regular maintenance. When the vehicle was about 70,000 k the dealership advised the following; • POWER STEERING FLUID IS LOW/ RACK IS LEAKING FORM GEAR AND IN TO BOTH SIDE BOOTS / REPLACE POWER STEERING RACK WITH BOTH OUTER TIE ROD NUTS at a cost of $1,622. 80 plus other charges. I cannot afford to pay for this and just found this site and is hoping someone can let me know what outcome they had in response to this problem. Any help is appreciated.
Curtis Smyers wrote on April 30, 2019 - 1:23pm Permalink
I am also commenting like Anne, Jerry, Isavel, P. Dusselaar, Pilar and Nelson...2012 Jeep Grand Cherokee with blown hi pressure and return lines in regards to the power steering. With a couple of fires in question, I would like to know what decision was made or whether it is still under investigation? Since this article was written in July 2012, to this date I have not seen a recall??
Joseph wrote on May 20, 2019 - 1:38pm Permalink
After reading about the power steering fluid leak in this forum I am thinking seriously to warn all people intending to purchase 2012 Jeep Grand Cherokee 3L diesel engine not to do so or let them do so at their risk. There are many people complaining about this factory fault and Chrysler don't want to own up. My Jeep of 2012 is leaking the power steering fluid and Chrysler says there is no recall Why? Let us all in our respective countries take it up with Chrysler
sharyn wrote on February 6, 2020 - 12:55pm Permalink
I was told by the Jeep dealer my 2012 Jeep has a power steering leak & to repair it will cost $2,700. Is that a normal realistic price for this repair?
Cee wrote on December 18, 2020 - 1:04pm Permalink
Same, 2015 Jeep Grand Cherokee went in for brake service and I was told steering column was leaking hydraulic fluid onto the boot. With no easy repair - the entire mechanism would need to be replaced for 2,000! There are copiuos amount of complaints out there about this issue with the Grand Cherokee, incl. loss of power steering due to loss of pressure AND, fires due to steering fluid igniting. Incidentally, my 2001 Grand Cherokee had the same issue TWICE, and for the longest time I just kept adding steering fluid.
DON SOUTHARD wrote on February 20, 2022 - 4:15pm Permalink
We have a 2012 Grand Cherokee with 66,000 miles on it. When we took it in for an oil change in January, we were told that the power steering deck was leaking. We scheduled it to be looked at and were told that it needed to be replaced and that the radiator also was leaking and needed to be replaced. The estimate for repairs was close to $3,800. We had the repairs done, but it is ridiculous that at 66,000 miles we had to have these repairs done. We had an extended warranty, but the time ran out before the mileage. We expected more from Jeep! We won't be getting another one.
patrick arthur ... wrote on August 2, 2022 - 4:09pm Permalink
lines was leaking. replaced both lines power steering works must the time, but gets tight, like its not working sometimes ?