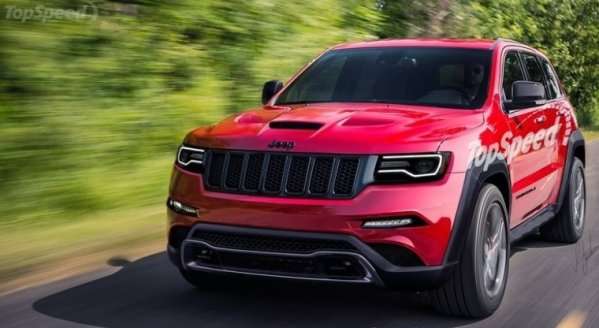 The Jeep Grand Cherokee SRT Turned Trackhawk Could Arrive for 2016

The have been rumors for a few months now that the SRT version of the Jeep Grand Cherokee could soon drop the “SRT” in favor of the new Jeep-specific package name Trackhawk and more rumors on the removal of the SRT name from the Jeep brand, I wonder if we will see the Trackhawk as soon as the 2016 model year.
Advertisement

Back in September, it was uncovered that the Chrysler Group had trademarked the name Trackhawk and at that time, it was speculated that this would be the name applied to the Jeep Grand Cherokee SRT once the SRT name was removed. Those rumors have intensified and while we have already seen the 2015 Grand Cherokee SRT to know that it won’t be here for the 2015 model year – the Trackhawk could arrive before the end of the 2015 calendar year.

Something Needs to Replace he SRT Jeep
Chrysler management has made it clear that the SRT lineup is being converted back into a trimline of the Dodge brand, and in theory, that means no more Chrysler 300 SRT or Jeep Grand Cherokee SRT. I have already spoken with a Chrysler representative who confirmed that the SRT 300 would not be continuing on in the US, but there has really been no word on a 2015 model year SRT Jeep. It should be noted that the high performance Grand Cherokee has regularly been one of the SRT brand’s most popular models so I refuse to believe that the Chrysler Group would be killing it off.

Regardless of the company’s intention of focusing their high performance efforts on the Dodge brand, the Jeep Grand Cherokee SRT has proven to be a popular enough model with a high enough price tag that Chrysler needs to keep it in the lineup. Mind you, it doesn’t need to be called an SRT…we just need to have a high performance Grand Cherokee on Jeep showroom floors.

Since the 2015 Jeep Grand Cherokee SRT has already been introduced – even though it isn’t available on the Jeep or SRT websites – it seems unlikely that we will see the Trackhawk for the upcoming model year. However, with the SRT trimline already being removed from the North American Chrysler 300 lineup and the ongoing push to make SRT a Dodge-only affair, it seems likely that the Trackhawk could replace the SRT name for 2016.

Regardless of the possibilities of a Hellcat Jeep, it is unlikely that the SRT name will continue to appear in the Trail Rated lineup beyond the 2015 model year so those folks eagerly awaiting the arrival of the Jeep Trackhawk could get their wish as early as this time next year.

The image above is courtesy of TopSpeed and their amazingly skilled artists, showing what they believe a Hellcat powered Grand Cherokee might look like on the road.

Joel wrote on April 11, 2016 - 3:18am Permalink
Please send me the price details and other information, it's the nice car. I like it