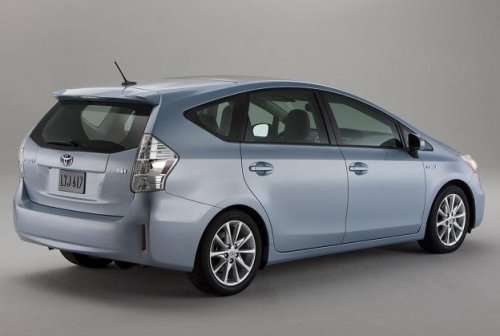 The 9.0 magnitude earthquake that hit Japan on March 11th caused a great deal of damage, complicated by the ensuing tsunami, aftershocks and nuclear power risks and because of the impact to the Japanese supply chain, Toyota may be forced to delay the Japanese launch of their new Prius V minivan.
Advertisement

After making its grand debut at the 2011 Detroit Auto Show in January, the new Toyota Prius V promised similar fuel economy to the top selling Prius Hybrid hatchback, with the newest addition to the Prius family set to make its production debut in Japan during April of 2011. Unfortunately, with Toyota’s production facilities all over Japan closed until at least this weekend and dealerships around the country damaged by the chain of natural disasters, it looks like the Prius minivan will not be arriving on schedule for Japanese consumers.

The specific cause for the delay to the new Toyota Prius V minivan is due to a break in the supply chain caused by the earthquake, the aftershocks, the tsunami and power outages stemming from the looming nuclear risk. While Toyota (and most other Japanese automakers) did not sustain any major damage at their production facilities, the automaker relies on smaller companies around the country that have been forced to cease production as they dig out. This stoppage among tiered suppliers has caused not just a concern of parts shortages for Japanese automakers but American companies as well, with GM stopping production at one plant and changing a production schedule at another plant.

The key problem for Toyota may prove to be the damage to the company’s Primearth EV Energy plant, which is responsible for around 300,000 vehicles-worth of nickel-metal hydride battery packs each year and depending on the downtime of the Primearth plant, Toyota’s hybrid production could be hit by nearly 27%. The company has two other plants in Japan that produce batteries but with an estimated loss of 27% from the Primearth’s 300,000 per year production, Toyota could find themselves in the hole by roughly 81,000 battery packs.

This deficiency in hybrid battery packs could hurt Toyota’s world-leading hybrid sales and as the company assess the ability to acquire parts from suppliers to meet production deadlines, it looks as though the Japanese-bound Prius V minivans are the first vehicle to be directly impacted. The good news for Toyota is that the company does not expect the string of disasters to impact European or American Prius V launch dates but with individuals in the industry surmising that it could take months for the Japanese automotive infrastructure to bounce back, Toyota (and the rest of the Japanese automakers) could face more problems over the next few months.

Tesla Contemplates A New Strategy for China Retail even As Sales Boom
Jay Leno on Elon Musk & EVs: “I Think He Should Get ... Credit"
END_OF_DOCUMENT_TOKEN_TO_BE_REPLACED