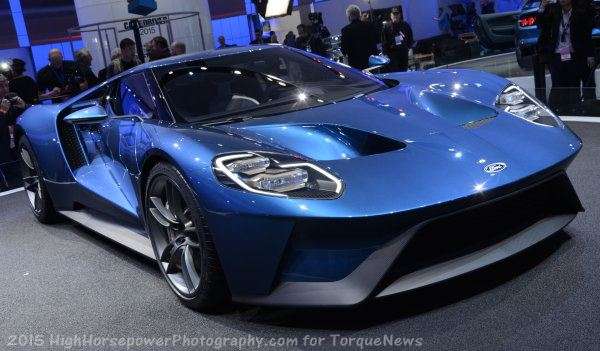 Even with the awesome new Ford Shelby GT350 Mustang on the way, rumors continue to crop up about a new Shelby GT500 Mustang, with the newest rumor suggesting that the 600+ horsepower EcoBoost V6 from the 2017 Ford GT supercar could become the power plant for the next generation GT500.
Advertisement

Ford has been somewhat candid with details on the 2017 Ford GT supercar, but we know that it will be powered by a 3.5L EcoBoost V6 that has been derived from the EcoBoost race motor used in the Rolex 24-winning EcoBoost Daytona Prototype race car. Ford has only told us that it will pack at least 600 horsepower, but with the ultra-lightweight carbon fiber chassis, the new Ford GT should be a real beast. Considering that the new Chevrolet Corvette Z06 has 650 horsepower and the Dodge Viper has 645 horsepower, I fully expect that the new Ford supercar will have at least 650 horsepower, but that is purely speculation.

Regardless of the official power output, we can expect that the newest version of the 3.5L EcoBoost V6 is going to be one wicked mill. Based on a new rumor that came to me via social media, that new EcoBoost V6 could be wicked enough to power the next generation Shelby GT500 Mustang.

Why it Kind of Makes Sense
Before the 2015 Detroit Auto Show, I would have never considered the likelihood of a 3.5L EcoBoost V6 powering a new Shelby GT500 Mustang, but that was before Ford rolled out two new EcoBoost V6 performance engines in the Motor City. The first is the new SVT Raptor engine, with output expected to be around 450 horsepower and the second is the Ford GT engine, with output promised to be over 600 horsepower. With those two new EcoBoost V6 engines, Ford has made their commitment to twin turbo V6 engines very clear and because of that, I give this V6 EcoBoost GT500 rumor just a touch of credit. Maybe not even a touch – but enough that it should be discussed.

One important thing to consider is that the 3.5L EcoBoost V6 in the Ford GT supercar has to have come with some hefty engineering costs. Rumors indicate that the company will only build 250 examples of the GT supercar for each model year and while the rumored $400,000 price tag will surely help the Motor Company recoup some of that R&D expense, I have a hard time believing that Ford would develop a high performance engine like the GT EcoBoost without making an attempt to use that engine in other, high volume vehicles.

Also, if you look at the 2005-2006 Ford GT supercar, it was powered by a supercharged 5.4L Modular V8. When the first modern Shelby GT500 was introduced for the 2007 model year, it packed that same 5.4L supercharged V8. The motor was introduced in the limited edition GT before making its way into the then-new GT500 and based on this rumor, the same thing could happen with the new GT500.

Different Goals for the GT500
Since the new Ford Shelby GT350 Mustang was introduced with a new 5.2L flat plane V8, it has been expected that a new GT500 would feature a higher performance version of that same engine. However, based on the GT500 in the previous generations, the range-topping Mustang was all about straight line performance whereas the new GT350 is a road racer. There is still demand for a very high performance Mustang that would range above the GT350 and offer more drag racing potential, but would the market be accepting of a twin turbo V6 Shelby Mustang? That is where I get stuck with this, as no matter how much power the GT EcoBoost V6 makes, it is hard to imagine a premium performance Shelby Mustang with anything but a big, bad V8.

John wrote on April 10, 2015 - 5:12pm Permalink
Eco-boost 5.0 - standard crank, 725hp. Done. No market research necessary. Nearly EVERY potential GT500 customer will want a V8. Only the exotic factor of the GT allows it to get away with a V6 - it's like dating a supermodel with a lisp - you'll tolerate it because the rest of the package is just so damn sexy. The GT500 is still going to be "just a Mustang" - a V6 in it will be a flop at that price point and the laughing stock of the muscle car world.
Lol wrote on April 11, 2015 - 2:45am Permalink
Anything with the word shelby isn't just a Mustang. It does need to be a v8 though. If not I will never get rid of my 5.4. F the 5.0. They should make their own. Motor specifically for the shelby.
Rubble wrote on April 22, 2015 - 5:20pm Permalink
yep, course...look at the 60s cobra, the crown vic/marauder shelby (525), the gt40 (prototypes), and even the raptor...
Brad wrote on April 11, 2015 - 5:48am Permalink
I couldn't agree more with John and I believe this will be the mistake of the century for Ford if they do implement the v6. You want to appeal to buyers, GT500 loyalists want V8 power and grumble. There is nothing sexy about a Shelby with a turbo v6 and I don't give a rats ass how successful it was in the prototype car its a terrible idea. I'm not even on board with the GT getting the v6 because its competitors in the price range are building a TTv8's note the new Ferrari 458TT. Ford would have been much better off putting a 5.2 TT in the GT, that makes sense. Ford will doom the mustang if they put the v6TT in the car and it will be painful to watch.
rick wrote on April 11, 2015 - 11:57am Permalink
Fords afraid a ecoboost mustang 3.5 would stomp crap out of a 5.0 and little lighter in nose. If a little difference ecoboost same engine 3.7.
scott wrote on April 12, 2015 - 9:55am Permalink
Have you heard the new GT.. it sounds like my old diesel truck, no thanks. V8 please!
KennyG1 wrote on May 25, 2015 - 6:09pm Permalink
The 3.5 eoboost in the Ford GT sounds like anything "But" a diesel engine! When I hear/see all the Diesel pickups that purposely puff out the black cloud of soot, they look terrible and sound like what I might imagine an elephant farting. Looks bad, sounds bad.....not sure what those drivers are thinking as no one is impressed except maybe themselves lol. The Ford GT sounds throaty and mean, nothing more said.
Ernest wrote on April 13, 2015 - 10:49pm Permalink
I cant see a turbo 5.0 coming out anytime soon for a gt500 considering there are already aftermarket companies making 950 hp twin turbo kits for the 2015 coyotes For probably close to the same end price.
Greg dale wrote on July 14, 2015 - 12:03am Permalink
Ford should resurrect and update the sohc cammer motor to go in the mustang. Make 5000 to go into the international market. I want one....I have a cammer in a '67 Mustang and it is way cooool. Greg
JOHN NUSSBAUM wrote on February 4, 2016 - 9:26pm Permalink
If Ford puts the 600hp. GT motor in the new GT500/ Shelby the Challanger which really has 726hp. (DYNO'ed) and the up coming Camero LT1/ Z28 Will have the 650+ hp. Z06 motor and less weight will both beat the pants off it. And sound MUCH better. V8 for my money. 5.2L. Flat Plane with good induction, 700hp. Minimum or I'll be forced to buy my first Camero. Ford Guy for 44 years. Cobra V8 FX4. V8