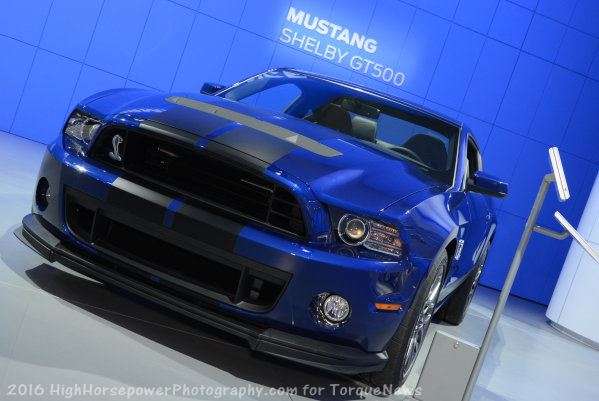 If a 2017 Ford Mustang Shelby GT500 is Real, a Detroit Debut is Likely

After a listing on Ford.com for a 2017 Mustang Shelby GT500 came and went, many people are expecting to see a new, high powered pony car from the Motor Company in the very near future – and if there really is a new GT500 coming for 2017, it will almost certainly be unveiling at the upcoming 2017 Detroit Auto Show.
Advertisement

If you missed our first story earlier this week, an odd listing for a 2017 Ford Mustang Shelby GT500 began showing up on Google.com when you searched “GT500”. Lots of links show up when you search for a 2017 Mustang GT500, but this Google search finding was important in that it linked to Ford.com. When you clicked that link, it took you to the general Ford Mustang page on Ford.com, where there was no information on the next Shelby Mustang and when I checked back this morning, that page is no longer showing up in a Google search.

However, what appeared to be a very official looking search result for the 2017 Mustang Shelby GT500 was showing up from Ford.com for a few days – and that is all of the proof we need to know that there is at least a new, more powerful Shelby Mustang in the making.

I have expected all along that there will be something coming from the Mustang stable to challenge the Dodge Hellcat cars, and a new GT500 seems like the perfect machine for that task. What strikes me as odd is the timing, as most 2017 models are already on showroom floors, so if the Mustang Shelby GT500 will arrive as a 2017 model year vehicle, it is going to be getting into the game incredibly late.

A New GT500 Mustang for 2017 - or 2018?
So, if Ford does bring out a new Shelby Mustang GT500 for the 2017 model year, it will be late no matter when it debuts at this point, but even if the Motor Company plans to hold the car off until 2018 – I expect that it will debut at the 2017 North American International Auto Show in Detroit’s Cobo Hall.

If there is a 2017 Ford Mustang Shelby GT500 coming, it will almost certainly be introduced at the Detroit Auto Show in a few weeks. If that is the case, I would expect that it would go on sale shortly after, as the new GT500 will have already missed a few months of 2017 model year sales come mid-January.

With that in mind, I would expect that a new Ford Shelby GT500 Mustang that debuts in Detroit next month would be introduced as a 2018 model year vehicle. This would give Ford plenty of time for a normal new model year roll out, with a dealership introduction in the spring or summer of 2017 providing a nice, long 2018 model year for the new high performance Mustang.

Of course, this entire discussion is based on the presumption that Ford is currently working on a new Mustang Shelby GT500. It seems that there was an IT mistake of some sort made when someone put that bit of information on the 2017 Mustang Shelby GT500 on the Ford.com, and thanks to that information, we have seemingly been alerted to the future of a new high performance Mustang. Many people believe that this information was accidentally put live early, but perhaps it wasn’t meant to be put live at all – in which case there is no GT500 coming for 2017.

The bottom line is that if there is a Ford Mustang Shelby GT500 coming for 2017, it is almost guaranteed to debut at the 2017 Detroit Auto Show. If there isn’t one coming for 2017, we could still see a new GT500, but if it is coming for 2018 or after – it might not debut next month in Detroit.

(For those unsure, the image above shows the 2014 Ford Shelby GT500 Mustang from the 2013 Detroit Auto Show)