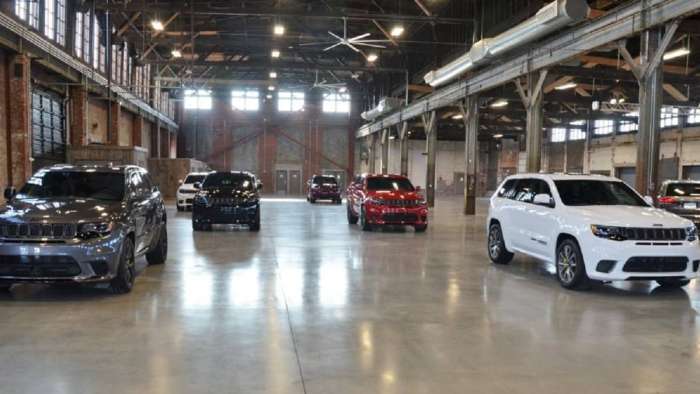 FCA plans to launch a three-row version of the Jeep Grand Cherokee by 2022 and based on a new report by the Detroit News, this larger version of the legendary SUV could be built at the now-inactive Mack Avenue Engine Plant II in Detroit – meaning that as GM is closing American plants, FCA could re-open an idled facility in Michigan.
Advertisement

Earlier this year, FCA issued their latest five-year plan and in it, the company detailed a bright future for the Jeep brand. As American consumers lean towards sport utility vehicles and away from sedans, FCA is working to make sure that the Jeep brand has an option in every major SUV segment. Right now, the Trail Rated brand covers about 80% of the segments but by 2022, their goal is to reach 100% of segment coverage.

Part of that expansion will be the introduction of a new three-row Jeep Grand Cherokee, but right now, the Jefferson North Assembly Plant (JNAP) where the current Grand Cherokee is built alongside the Dodge Durango is running at full capacity. In other words, there is no space in the production process for JNAP to build another vehicle. Fortunately, right next to the Jefferson North plant is the Mack Avenue II engine plant which was closed back in 2012, but according to the Detroit News, that old engine plant will be retooled to build the three-row Jeep Grand Cherokee for the 2021 model year.

Preparing Mack Avenue II
While using a production facility which is current idle to build the three-row Jeep Grand Cherokee sounds like a great idea, there will likely be considerable renovations required to transform an engine plant into a vehicle assembly plant. Luckily, with the reports that the three-row Grand Cherokee will arrive for the 2021 model year, FCA has more than a year to convert Mack Avenue II to a vehicle plant and according to this report, the automaker could make an announcement of these new production plans as early as later this week.

In any case, with the boom in SUV sales coupled with the fact that Jefferson North as running at capacity, it makes great sense for FCA to invest the time and money into making Mack Avenue II a vehicle assembly plant. As of the end of November, FCA’s North American plants were operating at 92% of their total capacity while GM was at 72% and Ford was at 81%. It is a good for business to be making such efficient use of your production facilities, but that leaves little room for growth. Mack Avenue II could provide the room for growth that the company needs to build more large SUVs in the coming years.