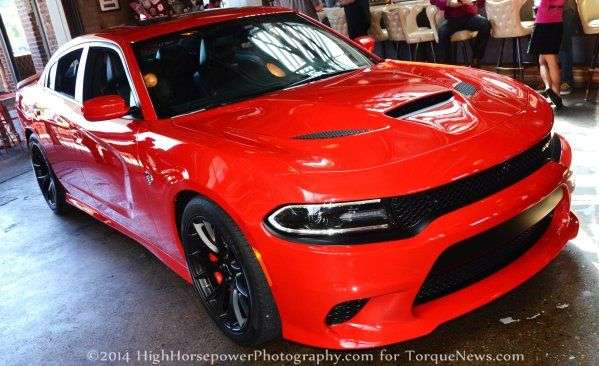 A while back I wrote a piece speculating that the Dodge Charger SRT Hellcat could actually be faster than the Dodge Challenger SRT Hellcat and after getting a fair number of nasty emails and comments about that speculation – I am here to point out that, once again, I was right.
Advertisement

Back on August 5th, I published a piece here on TorqueNews speculating that when the Dodge Charger SRT Hellcat hit the road and the track, it could be faster than the Dodge Challenger SRT Hellcat – even though the two had the same specifications and the Challenger smaller. I received nasty emails and comments on that article with people going on and on about how I was a moron for thinking that the big heavy sedan could be faster than the (big, heavy) Challenger with the same drivetrain. A few people made comments about how it was clear that I didn’t know anything about power to weight ratios and one person went so far as to say that I shouldn’t be allowed to publish articles as stupid as that piece.

Well, the Dodge Charger SRT Hellcat is here and guess what?

It IS faster than the Challenger SRT Hellcat – and it is seemingly faster in every way with the same components even though the Charger is 100-120lbs heavier depending on options.

Sizing Up the Charger and Challenger Hellcat Models
Both the 2015 Dodge Charger SRT Hellcat and the 2015 Dodge Challenger SRT Hellcat are powered by the same supercharged 6.2L Hellcat Hemi that sends 707 horsepower and 650lb-ft of torque to the rear wheels. The Challenger is available with either the new heavy duty 8-speed TorqueFlite automatic transmission or the 6-speed Tremec manual transmission from the Dodge Viper SRT while the Charger is only available with the TorqueFlite auto. I predicted that as well, but that wasn’t going out on much of a ledge.

Did you naysayers comprehend that? The Charger Hellcat has a higher top speed and a quicker certified quarter mile time than the Challenger Hellcat.

How is the Charger Faster?
While the Dodge Challenger could be the quicker of the two SRT Hellcat models around the right road course, the Dodge Charger with the 707 horsepower Hemi has a higher top speed and a quicker quarter mile time…but with the Charger being bigger and heavier – how is that possible?

In terms of top speed, the 2015 Dodge Charger is longer, lower and it has less frontal surface area. This allows the Charger to be about 12% more aerodynamic than the Challenger. The longer body should also allow the Charger to be a little more stable at those crazy high speeds.

In terms of the quarter mile times, the Dodge Charger SRT Hellcat is two tenths of a second quicker than the similarly powered Challenger and that is actually due in part to the fact that it weighs more and is larger than the muscular coupe. Having more weight over the rear wheels allows the Charger Hellcat to launch harder with more success while the longer chassis helps with weight transfer – furthering the launching advantage. That gets the Charger away from the starting line quicker while the superior aerodynamics allow the big sedan to cut through the air more easily at higher speeds, thus giving it an advantage further down the track as well.

So to all of those trashtalkers who called me out, insulted me and insisted that I was totally out of line for suggesting that the Hellcat Charger would be faster than the Hellcat Challenger – this is fine example of why I write the news and you argue about it on Facebook.

TK wrote on August 15, 2014 - 1:56am Permalink
Isn't it funny how the nay sayers never bother commenting on how wrong they were. This won't be the last time fools put their proverbial foot in their mouths.
Tim McKenzie wrote on August 15, 2014 - 10:43am Permalink
I agreed with your initial article. Imagine how fast it would have been if they would have made it AWD. Anyway, there is a real cheap mod that will make the Challenger as fast, or faster. Add 100-150 pounds of sand bags to the trunk of the Challenger. The Charger is faster because it's rear is heavier, preventing wheel spin during launch.
Patrick Rall wrote on August 15, 2014 - 11:23am Permalink
The Charger also has better aero properties so the added weight gets it off of the line faster and the aero helps on the top end. Then again, throw a good set of slicks on the Challenger and all bets are off!
ROadkill66611 wrote on May 20, 2015 - 10:32am Permalink
The Charger is simply more aerodynamic and has more rear weight, allowing it to move forward with less resistance than the Challenger. But both vehicles produce the same amount of power. They are both the same on the inside -- just with different shells on the outside. Had designers of the Challenger decided to make it more aerodynamic and add more rear weight to the Challenger, it would have probably be even faster than the Charger just because it's lighter. In any case, this is an argument over nothing. A miniscule 5mph difference and a possible .1 or .2 second difference on a 1/4 mile isn't enough for me to choose a Charger over the Challenger. The Challenger looks and feels like a true American muscle car -- not like some jap import-looking street racer. Sorry Charger fans, but it's true. Besides, the true potential of any vehicle is very dependent on the skill and heart of it's driver. So, that measly 5mph advantage may not even be a factor if you're up against a driver in a Challenger who knows what he's doing.